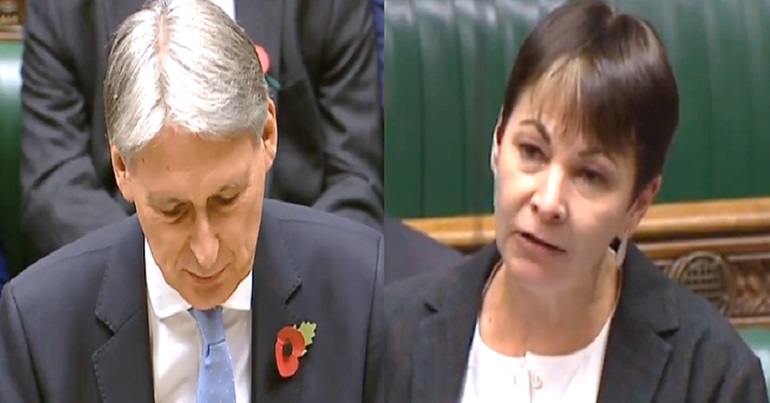 Green MP Caroline Lucas took just a matter of seconds to destroy the Autumn Budget. But before she could get any further, the speaker cut her off.

Lucas was speaking after chancellor Philip Hammond had delivered his budget. And she raised maybe the most important point of the entire debate:

But not one word, not a single word

And I get cut off when I raise it #Budget2018 pic.twitter.com/amjIqQu3bf

Indeed, looking at the government website, there are no budget announcements on the climate breakdown we face. The nearest thing is Hammond’s pledges on single-use plastics. But as Lucas noted, there were plenty of tax breaks for fossil fuel companies:

Hidden away in #Budget2018 is possible £3bn tax break for oil and gas companies in the North Sea – yet another blank cheque for the dirty fossil fuel industry whilst clean, renewable energy is ignored. pic.twitter.com/yOKuQGn8Ud

And as she also pointed out, this is despite scientists recently giving their starkest warning yet about the world’s climate breakdown.

As The Canary has documented, the climate and ecological breakdown we face takes many forms. From fracking to the food industry, via plastic pollution and Heathrow’s third runway, we’re on a collision course with disaster.

Most recently, the Intergovernmental Panel on Climate Change (IPCC) released a report on the climate breakdown. As the IPCC warned, we could cross the threshold into climate catastrophe as soon as 2030. And it noted that trillions of dollars in investment are needed to stop this.

So the budget was a disaster for the planet, to say the least. But some people are not letting the government get away with ignoring the catastrophes we face. Campaign group Extinction Rebellion, for example, will be doing various of acts of civil disobedience during November. It is demanding the government takes drastic action now (you can read more about the group here). In the meantime, we can all demand that more MPs join Caroline Lucas in holding the government to account for its woeful approach to climate chaos.

– Write to your MP to demand meaningful government action to fight against climate change.