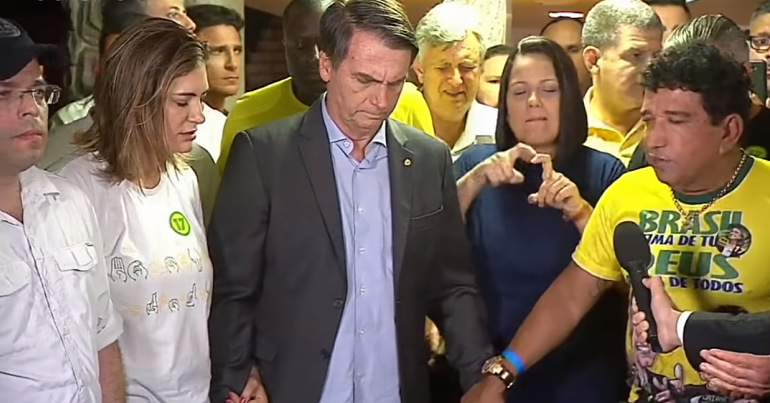 Tear gas, fireworks, and noise filled the streets of Brazil on Sunday night as thousands responded to the election victory of Jair Bolsonaro. The ultra-right-winger, who rose from relative insignificance to presidential frontrunner, received more than 55% of valid votes.

Some have compared Brazil’s new president with Donald Trump. But judging by his own words, Bolsonaro looks set to be far, far worse.

There’s something about the Western media and reducing some of the most horrifying global events to being “controversial”. According to the Guardian, Saudi Arabia’s genocidal “involvement in the ongoing Yemeni war” is “controversial”; for CNBC, Filipino president Rodrigo Duterte’s rape jokes and murder confessions are “controversial”; and for the BBC, Donald Trump’s “calling for a total shutdown of Muslims entering the United States” is “controversial”.

Quite predictably, Bolsonaro is now the Western media’s new “controversial” figure. But in his own words, Bolsonaro seems less ‘controversial’ and more an outright fascist.

I am in favour of a dictatorship, a regime of exception.

The pau-de-arara [a torture technique] works. I’m in favour of torture, you know that. And the people are in favour as well.

If I see two men kissing in the street, I’ll hit them.

Speaking to congresswoman Maria do Rosária in 2003, he spewed:

I’m a rapist now. I would never rape you, because you do not deserve it… slut!

War is war. He was a great strategist.

These are just some – and perhaps not even the worst – of Bolsonaro’s own words. And upon election victory, he hauntingly claimed: “All of the promises made to political groups and the people will be kept.”

During a week that saw pipe bombs sent to journalists and politicians in the US, and 11 Jewish people murdered in a Pittsburgh synagogue, many fear a global rise in the normalisation of fascism.

According to Intercept co-founder Glenn Greenwald, whose husband David Miranda narrowly missed out on election to Brazil’s congress, Bolsonaro shouldn’t be compared with Trump:

"He really comes not from this modern alt-right movement of the type of Donald Trump or Nigel Farage or Marine Le Pen, but the Cold War far-right that carried out enormous atrocity in the name of fighting domestic communism." – Glenn Greenwald on Jair Bolsonaro pic.twitter.com/VuOZVWT7Yk

Others agreed that Bolsonaro would be much worse:

‘Fascism has arrived in Brazil – Jair Bolsonaro’s presidency will be worse than you think’ https://t.co/SrsJDqR7bJ

And according to Tribune editor Ronan Burtenshaw, referring to the pre-election imprisonment of popular left-wing leader Lula da Silva:

Lula would have won today’s election in Brazil. Instead, the country’s elite was so scandalised by mild social democracy that they locked him up and elevated Bolsonaro to defend their interests. That’s what fascism really is: property showing its teeth.

Bad for the LGBTQ+ community, women, and leftists… But great for business

The creeping normalisation of fascism is particularly evident within the West’s response to Bolsonaro’s victory. Previously, the West might be expected to pay lip service to Bolsonaro’s horrifying rhetoric (but trade with him anyway). But now, many are not even pretending to value human life over trade opportunities.

Had a very good conversation with the newly elected President of Brazil, Jair Bolsonaro, who won his race by a substantial margin. We agreed that Brazil and the United States will work closely together on Trade, Military and everything else! Excellent call, wished him congrats!

And the following graph shows that, when faced with fascism or socialism, “those most invested in the economic status quo will always embrace fascism over the left”:

This graph (via @Estadao & @smoreira31) – showing Bolsonaro winning 97% of Brazil's richest cities and Haddad winning 98% of the poorest – should be everywhere.

A critical reminder that those most invested in the economic status quo will always embrace fascism over the left. pic.twitter.com/tUrsvCtB1M

This is also reflected internationally, as Brazil’s stock market is set to soar.

The rise of Bolsonaro is further evidence that capitalism and democracy are far from the same thing. Because while Brazil may still be a democracy now, it might not remain so for long. And it’s a safe bet that Western governements won’t worry too much about that, as long as they stand to benefit.