In a two page letter to UK prime minister Boris Johnson, 113 MPs from across the parties have accused him of deploying the language of “fascism”. Their prime concern was the consequences of a no-deal Brexit. They demand the recall of parliament. This follows speculation, reported by The Canary, that the Johnson-led government could crash out of the EU before parliament returns from the summer recess.

On the first page of the letter, the MPs get straight to the point and demand an immediate recall of parliament. They quote a number of precedents that allow for recall. 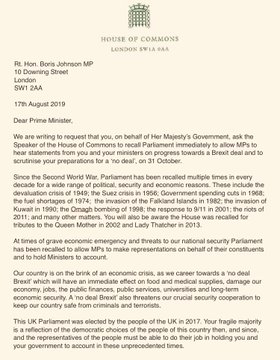 On the second page, the MPs accuse Johnson of not respecting parliamentary democracy and adopting populism.

They also referred to the “discredited rhetoric of the Leave campaign”. This rhetoric includes the exaggerations and downright lies disseminated by Vote Leave, the campaign group which Johnson fronted. The Canary published examples of these lies.

And the MPs go even further in their criticism of Johnson, accusing him of using the language of fascism and authoritarianism in his denigration of his Brexit critics. 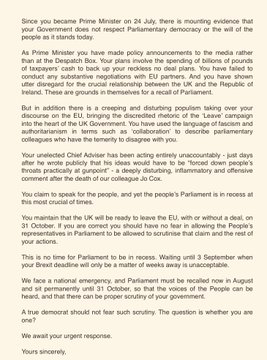 The letter also criticised Johnson’s special adviser Dominic Cummings, who is concerned largely with Brexit and its implications.

The letter from the MPs concludes:

We face a national emergency, and Parliament must be recalled now in August and sit permanently until 31 October.

A third page lists all the MPs who signed the letter: 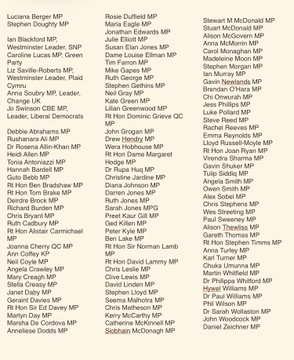 Earlier in August, The Canary reported how Cummings boasted:

[MPs] don’t realise that if there is a no-confidence vote in September or October, we’ll call an election for after the 31st and leave anyway.

And on 17 August, The Canary reported on a plan, outlined by Tory MP Tom Tugendhat, for the Johnson government to circumvent a vote of no confidence. The plan would see the UK exit the EU by 24 Aug, as an act of unilateral withdrawal.

A no-deal Brexit is seemingly Johnson’s “central scenario”, and according to one diplomat, “Even if EU gave up the backstop there is no alternative [to no-deal]”. No-deal will likely bring about economic disaster, with a huge fall in the pound, panic buying, business closures, and possibly civil unrest.

And cabinet secretary and national security adviser Sir Mark Sedwill has argued that if the UK left the EU without a deal then a recession is likely as well as a fall in sterling. According to Sedwill, food costs would rise by 10%. Some stores and supermarkets are already working with police if no deal goes ahead and leads to protests, looting, or rioting.

On 14 August, The Canary published details of a cross-party parliamentary report – The consequences of “No Deal” for UK business. It concluded that no-deal Brexit:

could lead to severe disruption of the economy, pose a fundamental risk to the competitiveness of key sectors of the UK economy, and put many jobs and livelihoods at risk.

The letter from the 113 MPs coincided with the publication by the Sunday Times of a leaked Cabinet Office report, marked ‘official sensitive’. It outlined a worst case scenario for no deal Brexit.

According to Sky News, the report made it clear that a no-deal Brexit could lead to shortages of food, fuel and medicine, as well as a hard border on the island of Ireland.

This is not project fear – this is the most realistic assessment of what the public face with no-deal. These are likely, basic, reasonable scenarios – not the worst case. 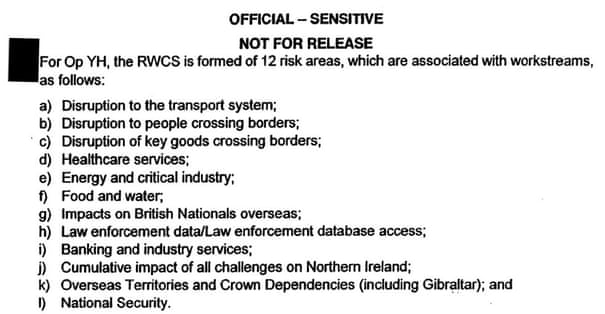 In March 2019, the Ministry of Defence announced that under the auspices of ‘Operation Redfold’, around 3,500 military personnel would be readied for deployment in the event of no-deal. The plan also included the deployment of several hundred reservists. The operation would be run by the Defence Crisis Management Centre, headquartered in a nuclear-proof bunker, known as Pindar, in Whitehall.

More than 10,000 riot police are also prepared to intervene in riots and other disturbances and ready for “worst-case scenarios”. Of those officers earmarked for deployment, 1,000 are trained in the use of armoured vehicles and water cannons.

But despite these threats by the Johnson gang, there are signs of rebellion.

The 113 MPs who signed the letter to Johnson didn’t mince their words. Indeed, the language in the letter is probably unprecedented in its tone.

But the next step in this rebellion could involve far more than a letter by parliamentarians. For if the worst scenario takes place, there are people’s livelihoods, if not lives, at stake.