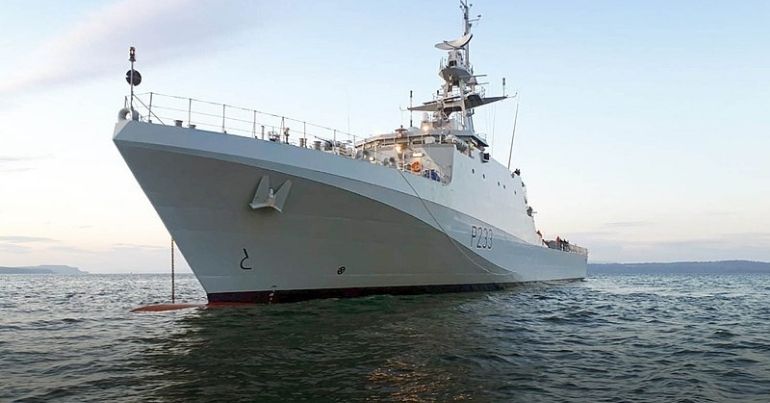 Two Royal Navy vessels have been deployed to Jersey amid a row about post-Brexit fishing rights. French fisherman are angered by new licences issued in the wake of Brexit. These licenses are said to restrict the days shared waters can be fished.

Until Brexit, a 200-year old treaty defined fishing rights. This is yet another example of how post-Brexit trade deal issues are causing friction between the UK and EU countries.

The EU backed the fishermen, saying that the changes to the licensing had not been carried out properly. The European Commission told the Guardian in a statement:

The commission was notified on Friday 30 April by UK authorities of the granting of 41 licences to EU vessels for fishing in Jersey’s territorial waters as of 1 May with specific conditions.

Under the EU-UKTCA [trade agreement], any proposed management conditions have to be notified in advance to the other party, giving them sufficient time to assess and react to the proposed measures.

They added that changes must be carried out to a scientific rationale – relating to fishing stocks – and must not discriminate between EU and UK fishing vessels.

Furthermore any addition of new specific conditions to these fishing authorisations that limit EU fishing activities in UK waters must comply with the objectives and principles set out in the TCA, which are based on clear scientific rationale. Any such conditions must also be non-discriminatory between UK and EU vessels.

The EC appear to reject the new conditions which limited the amount of fishing, saying as much in their intervention:

The commission has clearly indicated to the UK that the provisions of the EU-UKTCA have not been respected. Until the UK authorities provide further justifications on the new conditions, these new conditions should not apply.

The two patrol ships reportedly arrived at 6am and started observing the French flotilla of about 80 ships. The flotilla then head into St Helier’s port.

Downing Street told the Guardian that the ships were there to monitor the situation. According to the Independent, Jersey’s foreign minister Ian Gorst insisted in a radio interview that the situation did not signal war with France:

Absolutely not. But let’s be clear, the threats emanating from Paris, and then the threat today of a blockade of our harbour here in St Helier, are totally disproportionate to the technical issues that we’re facing with the implementation of the Brexit trade deal.

We take those threats very seriously: we’re grateful to the prime minister for his full support, and what we need to do now is find diplomatic solutions to the issues that we’re facing.

A member of the Jersey Militia reenactment group was seen firing on the French boats with a musket from Elizabeth Castle this morning.

It's after the flotilla of French fishermen who blockaded Jersey's main harbour returned to open water.https://t.co/0nY4Kja6uw pic.twitter.com/rQQ4yPHvxd

The use of military hardware and personnel to solve border issues has become something of a theme under the Tories. Military ships and aircraft were deployed to stop migrants crossing the channel in August 2020. At the time, the mayor of Calais said the UK should take responsibility for its international obligations.

It is not clear how long the Royal Navy ships will remain off the shore of Jersey. However, it does seem increasingly standard practice to militarise issues, like fishing and migration, which previously would not have been dealt with by the armed forces.