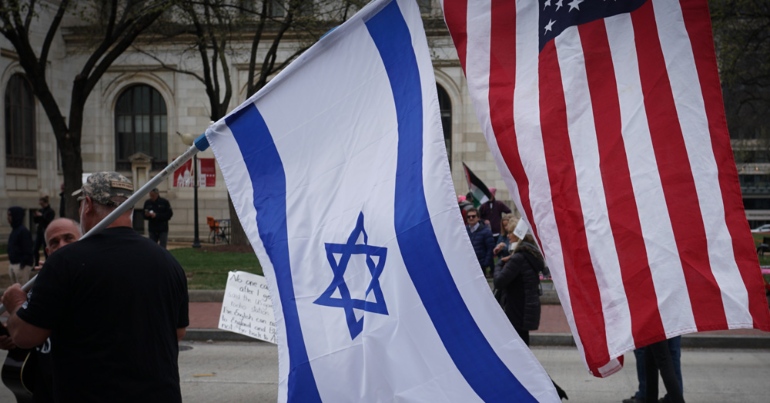 The US Congress just passed a bill to give Israel another whopping hand-out for military spending. And – as would be expected – it passed with a huge majority of both Republicans and Democrats. We shouldn’t be surprised. As The Canary has pointed out on numerous occasions, in the US there is essentially a bipartisan consensus for unconditional support for Israel.

Around the same time, the Labour Party in the UK showed that it still has some claim to be a supporter of Palestinian rights. In spite of its current (increasingly beleaguered) Blairite leadership, the party appears to still have a largely left-leaning membership as well as an active, albeit small, left faction amongst its MPs. And that shows just how isolated the US is on this issue when compared to one of its main European allies.

On 23 September, the US House of Representatives voted on a measure to provide Israel with $1bn in military funding. The money is believed to be for the Zionist state’s so-called Iron Dome aerial defence system. This latest massive provision of aid to adds to an already huge amount of money that the US government has given to Israel over the decades. Israel is, in fact, the largest cumulative recipient of US aid since World War II.

The overwhelming majority of this aid goes to funding Israel’s military. And since the country’s military has been the major perpetrator of human rights violations against Palestinians, the US has essentially been (at best) aiding and abetting Israel’s continuous campaigns of state terror.

The bill passed with a stunning 420-9 majority, with one Republican joining eight Democrats in opposition. Amongst the Democrats opposing the bill were Rashida Tlaib, the only Palestinian-American member of the US Congress, who spoke out in strong terms against the measure. Shortly before the vote she tweeted:

I plan on casting a no vote. We must stop enabling Israel’s human rights abuses and apartheid government.

Two other Democrats voted “present,” which is an option in the US Congress similar to abstaining from voting. One of the two doing so was Alexandria Ocasio-Cortez. On 24 September, Middle East Eye published a lengthy article featuring a string of tweets criticizing the move. One social media user suggested that the vote might have been a calculation on Ocasio-Cortez’s part to position herself for a run for the Senate, the US Congress’ upper chamber.

The huge majority voting in favour of the measure highlights what has unfortunately been a decades-long trend in US politics. As The Canary has pointed out before, both major US parties have overwhelmingly supported US aid to its closest ally in the Middle East. Some Democrats even supported some of former president Donald Trump’s kowtowing to the far-right Israeli government of Benjamin Netanyahu. In 2017, for example, then-Senate minority leader Chuck Schumer supported Trump’s move to recognize Jerusalem as Israel’s capital. In 2020, meanwhile, Israeli newspaper Haaretz reported:

The Democratic Party’s policy platform for the 2020 fall elections will include a statement of strong support for the U.S.-Israel relationship, including the continuation of U.S. military aid to Israel and recognition of Jerusalem as Israel’s capital.

Encouraging signs across the pond

As an internationalist and democratic socialist party, it is the responsibility of the Labour Party to speak up for Palestine and stand in solidarity with the Palestinian people and their fundamental rights, including to self-determination.

Labour must build on – not step back from – its commitments to immediate recognition of the state of Palestine and an end to the blockade, occupation and settlements as outlined in the 2017 and 2019 manifestos, and in the motions passed by the Party’s annual conferences in 2018 and 2019.

Read the full text of the resolution here. Former Labour leader Jeremy Corbyn celebrated the development on social media, stating on Facebook that the Labour Conference “voted overwhelmingly to step up solidarity with the Palestinian people”. He added: “This motion must be respected – #SpeakUpForPalestine”.

Certainly this move should be celebrated. But the reality is that the future doesn’t look encouraging. After all, the $1bn funding package for Israel was passed near-unanimously in the legislature of the US, the most powerful country in the world. The Labour motion in support, on the other hand, was only a symbolic gesture at the conference of an opposition party in a country that arguably has no independent foreign policy of its own.

Palestinian solidarity activists should redouble their efforts to change public opinion and hold political representatives accountable for their unconditional support for the apartheid state of Israel.