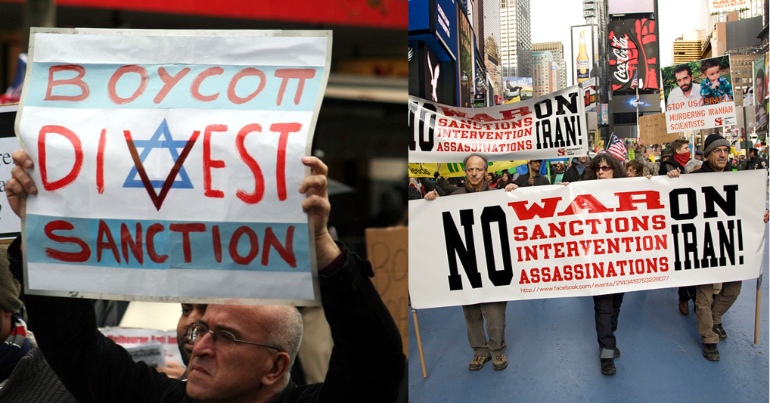 As Israel’s latest massacre in Gaza has unfolded over the last few weeks, international outrage has injected a surge of energy into the Boycott, Divestment and Sanctions (BDS) movement. Over the past few years, BDS has emerged as one of the most vibrant and promising tools in working towards ending Israeli apartheid and the occupation of Palestine.

In an exclusive interview with The Canary earlier in May, Prof. Ilan Pappé (himself an Israeli Jew) described BDS as “an excellent organization that galvanizes and knows how to use solidarity in the most effective way”. Naturally, figures on the political right have been aggressively mobilizing to discredit BDS and its supporters. And the hackneyed charge of antisemitism forms a large part of their toolkit. This is obviously ridiculous, not least because a significant amount of BDS supporters are themselves Jewish – including members of Jewish Voice for Peace.

There is, however, a more sophisticated criticism levelled by opponents of BDS. And that is the charge of hypocrisy towards those who support sanctions against Israel yet oppose sanctions against US adversaries such as Iran, Cuba, Venezuela and Nicaragua. Now this may be more superficially persuasive than the facile antisemitism smear. But a more nuanced analysis shows that there is, in fact, no contradiction here.

Cutting to the chase

Examples abound of right-wing commentators alleging a hypocritical stance. Take for instance a January 2019 article for the Washington Examiner. It complains that Democratic Party congressmember Ilhan Omar is “deeply opposed to sanctions — unless they’re against Israel”. It points, in particular, to comments Omar had made condemning US sanctions against Iran, and laments:

Sanctions against Iran, an antagonistic regime that has persecuted Christians and Sunni Muslims, slaughtered pro-freedom protesters, and promoted terrorism in the Middle East and abroad, doesn’t deserve sanctions [according to Omar]. But [for her,] Israel, a U.S. ally, does?

Notice that the author seems to think the most important factor about Israel is that it’s a US ally. In other words, it’s a case of ‘support our friends, right or wrong’. By extension, therefore, Israel’s track record of aggression is irrelevant to the Washington Examiner. This includes:

But dwelling on this would be too easy. The larger point of whether those who support sanctions against Israel yet oppose them in other cases are being hypocritical does merit a serious response. But a more nuanced analysis shows that this argument is ultimately a clear-cut case of false equivalence.

First of all, we must consider the context. As The Canary has reported on several occasions, Israel is the largest cumulative recipient of US aid since World War II. So any harm to Israel has to be contrasted with the fact that it’s already received huge benefits from the richest, most powerful country in the world for decades. And the vast majority (since at least 2000) has gone to military forces rather than any kind of social spending. In 2019, for example, the US funneled over $3.8bn in foreign aid to Israel. Of this, only $8.5m (just 0.2%) went toward non-military spending.

One criticism against sanctions is that they would harm Israel’s civilian population. However, given its huge military budget, sanctions might have the effect of simply forcing Israel to redirect military spending towards helping its citizens. Moreover, targeted sanctions could single out Israel’s arms and military spending, rather than affecting public services and social investment.

Most importantly, in the case of sanctions against Iran, Cuba, Venezuela and Nicaragua, these harm the very people they’re intended to help. But sanctions against Israel are intended to help people in the West Bank and Gaza strip. Israel’s government provides such little social spending to this population that European governments have had to step in with humanitarian aid. Moreover, the vast majority of what Israel does spend on the occupied territories is spent harming rather than helping them.

Another important consideration is the issue of motivation. The purpose of sanctioning Israel would be to punish its behavior. Whereas this is patently not the motivation behind US sanctions against Iran, Cuba, Venezuela and Nicaragua.

Washington doesn’t sanction these countries because of anything they actually do. Rather it’s because the US disapproves of their governments/ economic systems and wishes to impose ‘regime change’ upon them. During the Trump era, Washington’s foreign policy establishment (which, incidentally, is bipartisan in nature) was surprisingly open about this reality.

And anti-imperialists should welcome this as a refreshing expression of honesty compared with what came before. Trump’s predecessors preferred to dishonestly hide their true motivations behind bogus concerns about human rights or democratic deficits.

The historical precedent and the legacy of South Africa

There’s also a historical precedent worth remembering. The international community used sanctions as a way of isolating and expressing their disapproval of apartheid in South Africa. And so it should do again with the most flagrant practitioner of ethnic apartheid in the current era. Especially since the international campaign against South Africa was ultimately successful. It’s now widely accepted that international pressure played a key role in the collapse of that country’s brutal system of racial oppression.

We must be unequivocal: along with boycotts and divestment, calling for sanctions is a perfectly legitimate tool. One with which Palestinian solidarity activists can resist the murderous actions of apartheid Israel and its violent occupation of Palestine. And therefore, we must equally push back at attempts to smear our movement with the facile false equivalence attributed to support for sanctions. The alternative would be to allow BDS to wither against a dishonest campaign waged by the propagandists for Israel’s crimes.