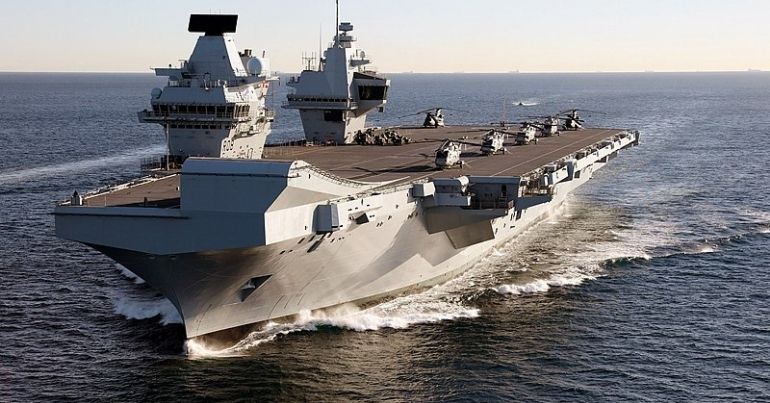 HMS Queen Elizabeth’s 2021 world tour saw the flagship aircraft carrier visit some of the world’s most grotesque dictatorships while showing off British military equipment. It came at a cost of £73m to the taxpayer   – not including one lost fighter jet. The figures emerged from a parliamentary question put to Tory defence minister James Heappey by Labour’s John Healey.

The table below sets out the countries and/or overseas territories that the UK Carrier Strike Group has interacted with during the 2021 deployment. This also includes activity undertaken by our Integrated Partners, the Netherlands and United States.

The list is a virtual Who’s Who of Western-backed dictatorships, authoritarian regimes, and human rights abusing states. These included countries on the UK’s own human rights priority list. Among them were Bahrain, Egypt, Saudi Arabia, and Bangladesh. In the latter case, UK marines trained special forces as part of the carrier group’s trip. Brunei, which recently passed new anti-LGBTQI+ laws, and Turkey all featured.

The carrier group also stopped off in Haifa to work with the Israeli Navy, despite Israel also featuring on the human rights priority list. Some UK interactions with Gulf autocracies and Iraq were as part of the so-called Dragon Group, a regional and international military alliance.

The itinerary also included Diego Garcia – an Indian Ocean island leased to the US as a strategic base. The native Chagossian Islanders were forcibly expelled by the British from the late 1960s to make way for American forces.

A visit to Ukraine to sign contracts for new military ships resulted in a controversial incident. Russian planes ‘buzzed’ a British warship as it sailed through contested waters. Handily, UK media teams were on board to record the incident. A leak later revealed the journalist’s presence had largely been orchestrated by the military for propaganda purposes.

The £73m figure may be conservative. General running costs for the carrier group which would accrue whether or not it was deployed were not tallied. Additionally, the loss of an (estimated $115m) F-35 fighter jet which crashed into the sea in November isn’t included.

Some in the MOD-adjacent press suggested that £73m seemed like “good value for money when considering the number of countries visited”. However, it’s more difficult to gauge the views of people in places like Bahrain, Saudi Arabia, Brunei, or Palestine.