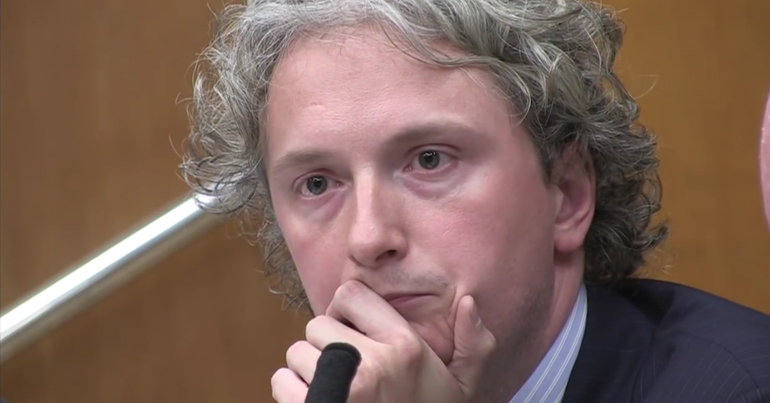 Protesters disrupted a Royal Borough of Kensington and Chelsea (RBKC) council meeting on 7 March. And a poster was held up demanding the whereabouts of an ex-councillor responsible for the tower’s refurbishment. But plans for new houses in Norfolk hint at what he’s been up to.

Rock Feilding-Mellen oversaw Grenfell Tower’s refurbishments, including the flammable cladding believed to have accelerated the fire’s spread. Documents suggest the decision to use cheaper but more flammable cladding was made to satisfy the councillor and the planner. But on 24 June 2017, the Mirror reported he “fled his home” following backlash from residents who were angry at his role in the fire.

Six days later, on 30 June 2017, Feilding-Mellen resigned from his £48,000 a year [pdf, p2] council position. He has since left the public eye. And this led one person at RBKC’s recent full council meeting to hold up a poster featuring Feilding-Mellen’s face and the question, “Where?”:

Socially Conscious Capital (SCC) is a property development firm listing Feilding-Mellen as its director. In 2017, The Times reported [paywall] that he is also the company’s majority owner. The developer designs and develops housing estates with “distinctive character”. And it claims to base its work on a principle of “responsibility” by:

Genuinely listening to local residents. Awareness of the sensitivities of the site and its surroundings. Becoming a real part of the community.

But one of SCC’s projects suggests otherwise.

Racecourse Plantation is a proposed housing development located on the edge of Norwich, Norfolk. Designs were submitted in 2011, 2013 and 2016. Each was rejected by the local authority. The plan has faced controversy because of its location inside woodland that Norfolk Wildlife Trust describes as a “key biodiversity asset” for the city.

The 2016 proposal was rejected by local authority Broadland District Council in June 2017 for a number of ecological reasons including the size of woodland that would be removed. But Friends of Thorpe Woodlands, a group of locals opposed to the plans, were worried SCC would appeal.

These fears came true when SCC appealed [pdf] in October 2017. The appeal claims [pdf, p12] that “all of the reasons from the Council and Consultees are unwarranted or unfounded”. But Friends of Thorpe Woodlands says this shows SCC “are not interested in the views of local people or their councillors”. The appeal is due to be heard in May this year.

SCC claimed that more than 70 people support its 2016 proposal. In 2013, 2,440 letters of opposition were made to the local authority, alongside statements from conservation charities. These included the RSPB, Norfolk Wildlife Trust and Natural England. And now, the local opposition group is asking the public to “make a big difference” by sending letters of opposition to the latest appeal.

A 450-house estate is being built by SCC in the village of Longniddry, Scotland. Approval was granted in August 2017 despite similar long-running opposition by local residents.

Grenfell Action Group had written a number of posts about Feilding-Mellen and Socially Conscious Capital. The group, made up of local residents, had blogged about the tower’s safety risks for months before the fire. And in a post on 6 March 2017, it said:

Given the record of Feilding-Mellen’s ‘Socially Conscious Capital’… one has to seriously question whether this man can be trusted with the ecological and environmental protections to which the RBKC Council is supposedly committed and whether he is fit to manage the so-called ‘regeneration’ of the social housing estates of the Royal Borough of Kensington and Chelsea.

Despite SCC’s claims of responsibility, impacts on local residents and ecology appear to mean very little. And its director continues to profit from housing development as hundreds remain homeless after the Grenfell Tower fire. This lack of accountability cannot continue.

The Canary repeatedly contacted Socially Conscious Capital for comment but received no response by the time of publication.

– Watch this video about Racecourse Plantation.

– Support the campaign to save Thorpe Woodlands, especially if you live locally.