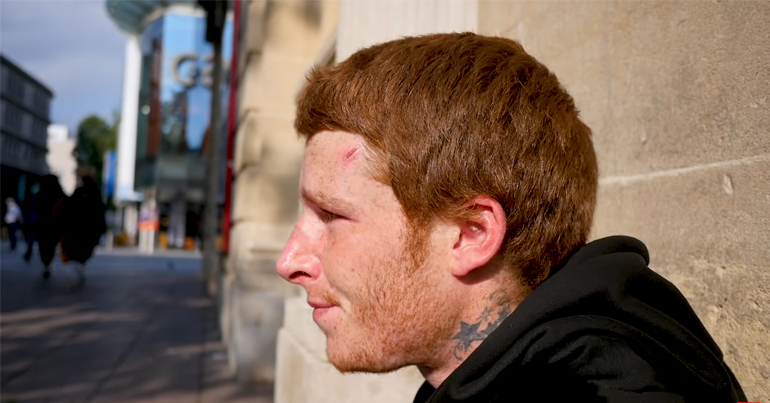 One man has shared a moving response about Universal Credit to the Tory councillor who wanted to “tear down” tents belonging to homeless people.

“Instead of freezing to death in a doorway, we bought a tent.”

On 27 January, WalesOnline published a video interview with Andy Davies, who currently sleeps in a tent on the streets of Cardiff. It came three days after Kathryn Kelloway, a councillor for the Welsh city, called for “these tents” to be torn down. In the video, Davies said:

This is my message to [Kelloway]… we’re just getting on with our life and instead of freezing to death in a doorway, we bought a tent.

Kelloway defended her original claim, saying there are enough hostel beds for everyone sleeping on the streets of Cardiff. But as The Canary has previously reported, there are a whole host of reasons people choose not to enter hostels. Davies told WalesOnline that he avoids hostels because they are:

full of druggies and junkies. … I don’t want to go there and sit with junkies. I feel a lot safer in my tent on the street. At least I know I’ve got a bed in my tent.

Kelloway was suspended from Cardiff’s Conservative group for her comments. But the councillor refused to apologise or retract her statement. “I stand by what I said… I’m glad what I said has raised so much awareness and is a platform for people to discuss,” she responded.

Davies didn’t just take Kelloway’s comments to task. He also explained why he – and so many others – are in tents in the first place. Speaking through tears in WalesOnline‘s video, Davies said:

As The Canary has reported since its earliest days, Universal Credit is a disaster. The benefits scheme drives already vulnerable people deeper into poverty. Some have even died under the scheme.

In October 2018, the Observer reported that “universal credit is fuelling Britain’s homelessness crisis”. Charities across the country cited the massive impact Universal Credit has had on their clients. For example, Malcolm Page, the Salvation Army’s assistant director of homelessness services, said the scheme is “a major issue for us now”. Davies told WalesOnline that Universal Credit made him homeless too.

The scheme was introduced in 2013 by the Conservatives, Kelloway’s party. It reached Cardiff in February 2018.

Kelloway’s comments caused a public outcry. Good. But the cynical defence that her tweet ‘raised awareness’ of the issue is utterly vile. Let’s not forget that Kelloway’s original tweet only talked about the “safety” of the city centre and “prosperity for local businesses” as benefits of tearing down the tents.

I have every right to be here.

Yes, he does. As does everyone else forced onto the streets by savage government policies. Meanwhile, those of us in less vulnerable circumstances must stand in solidarity with them. Against vile councillors, against Universal Credit, and against governments that destroy people’s lives.