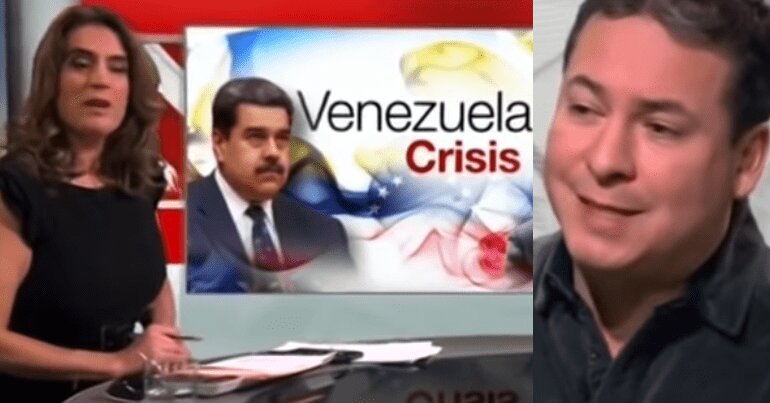 Journalist and filmmaker Pablo Navarrete has demolished the BBC’s Venezuela propaganda, straight to the broadcaster’s face.

‘Only 20% of Venezuelans had even heard of the coup leader’

Navarrete began on 26 January by calling out the ongoing NATO and EU-backed coup attempt that the BBC has been presenting as humanitarian:

It’s pretty lamentable that what appears to be quite a shameless and unconstitutional power grab by Juan Guaidó in Venezuela is being supported and promoted by the US – and a number of its allies in the UK and now France and Spain have given Maduro seven days to call elections otherwise they say they will recognise Guaidó as the president of Venezuela. I think we have to really step back and look at what’s happened here. A guy who, until a week ago, was known by less than 20% of the Venezuelan population has proclaimed himself president, unconstitutionally, and has been recognised by the US. We now know he met with the US in mid December. And so this is the latest stage of escalation of a regime-change plan by the US, which has been trying to overthrow the Venezuelan government for… nearly 20 years now.

In 2002, Washington backed powerful local allies in Venezuela in an attempt to overthrow former president Hugo Chávez in a coup. The US has tried to destabilise the country through sanctions, covert funding of right-wing opposition parties, and disinformation about its electoral system ever since. Now, the US and the Western corporate media have announced that Guaidó – a person whom only one in five Venezuelans had heard of before the coup attempt – is Venezuela’s rightful president.

Take down by analogy

The BBC presenter then said:

As you said though, it’s not just the US… there are clearly concerns internationally – and many Venezuelans as well – who are unhappy with the presidency of Maduro.

But Navarrete, founder and co-editor of independent media outlet Alborada, had an analogy ready:

Sure… there are many people that are unhappy with… prime minister Theresa May. It doesn’t mean that a minor member of the Labour Party can declare himself president on Oxford Street. We have to differentiate between the crisis, which is very real, desperate –  my family live in Venezuela – and regime change… You can be against the government but look for a political solution, which is what has been tried. The ex-president of Spain… spent two years trying to get a political solution, which was very close. And at the last minute – due to the US interference – this didn’t come to fruition. That’s the only solution for the polarisation that’s taking place in Venezuela. It certainly isn’t a military coup headed by the US, which, as we all know, has a sordid history of military intervention in Latin America with hundreds of thousands of people dying as a result.

Venezuela already had an election recently

Guaidó claims that the election is not valid because the voting system is corrupt. But the opposite seems to be true. Because former US president Jimmy Carter, for example, had previously called the Venezuelan voting system “the best in the world”. Cross-party observers, for example, audit the electoral process – which includes fingerprint scanners, voting receipts and high-tech systems.

Still, Guaidó is alleging that the election was fraudulent in order to topple Maduro. And given that Guaidó is president of the national assembly, he claims that he constitutionally becomes the de facto leader of Venezuela if there is no legitimate president. That is disputed.

But the main problem is: Maduro is the elected president. So Donald Trump, the mainstream media, and most of the ‘neoliberal‘ world order are helping Guaidó overthrow democracy in Venezuela.

Fortunately, Navarrete brought a much-needed dose of reality to the BBC. And it was incredibly refreshing to see.