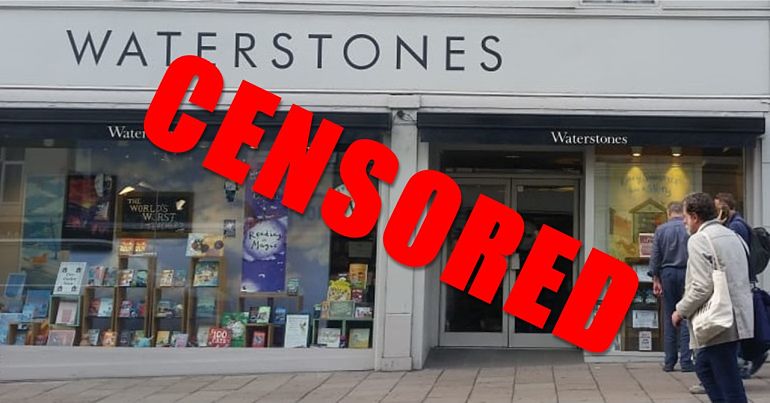 A torrent of “threats” and ‘abuse’, allegedly levied against Waterstones in Brighton, resulted in the cancellation of a book launch on antisemitism and the Labour Party. Pluto Press and Waterstones announced that they were “delighted to host an event to mark the release of Bad News for Labour: Antisemitism, the Party and Public Belief” on 23 September. But the bookstore then updated its website to say: “Due to reasons out of our control we have had to cancel tonight’s event”. Organisers told The Canary this was down to a “harassment” campaign.

Independent publisher Pluto also released a statement expressing its ‘disappointment’ that “external pressure” had resulted in the cancellation of the event:

We are disappointed to announce that tonight's launch for 'Bad News for Labour' has been cancelled by @Waterstones, Brighton due to external pressure put on the store… https://t.co/dhQdRu0DYm

“A barrage of abusive emails, phone calls, and tweets”

Greg Philo, the lead author of the book, informed The Canary via Justin Schlosberg, also a co-author, that:

Our book acknowledges the existence of antisemitism in the Labour Party but critically examines the degree to which people have been misinformed about its extent and the role of the leadership in dealing with it.

The Canary received a response from Waterstones which offered a very different explanation for cancelling the event on the day:

I can confirm that we have cancelled today’s  event. I would like to make clear that we did not receive threats or harassment. Here are some points to outline why we have made the decision.

• this was a small event with about 50 tickets sold

• we do not wish to be caught in this debate at an especially emotive moment: it is not a debate from which we shy in terms of book stock but it is not one in which we wish to be perceived to have taken sides

• on a more practical level, we have not yet received the book stock and worried that it would not arrive in time

• we hope to reschedule the talk in this shop, or in others when we can be better prepared

Waterstones’ statement contradicted by the authors

But Schlosberg subsequently confirmed to The Canary that he was directly warned on Saturday that the event would likely be cancelled due to a “barrage” of “threats” and “harassment”.

David Miller, an academic with the University of Bristol and co-author of the book, also pushed back against Waterstones’ statement. He told The Canary “there were threats”. He also said “It’s not a debate. It is research findings”. Furthermore, he said the books arrived in Brighton at 2pm, well before the event was supposed to be held at 7.30pm. In fact, “the guy who arranged the event offered to come and sell the books personally”.

“Only one step from book burning”

Miller told The Canary: “It is really extraordinary that [this book event] has been cancelled as a result of threats”. He called it a “serious attack on both freedom of speech and academic freedom”.

Academics from four universities are being stopped from discussing their research in a bookshop. It is only one step from burning books.

Organisers scheduled the event to occur on the evening of the third day of the Labour Party’s annual conference. Miller explained that “on arriving in Brighton at 12.37pm I got a message that people with tickets were in receipt of refunds”. This was a common theme. Andrew Feinstein, founder of Corruption Watch and author of The Shadow World: Inside The Global Arms Trade, told The Canary that he had been looking forward to attending the event “for a number of months”. He drove down to Brighton specially for the event and received an email at around 12.30pm refunding him for his ticket.

Andrew Feinstein: ‘This is personal to me as a Jew’

Feinstein explained that his “interest in the issue is born out of a number of factors”, including:

That I’m Jewish. That I’m a son of a holocaust survivor who lost 39 members of her family in the holocaust. That I was the first MP to introduce a motion in the South African Parliament, [which shockingly hadn’t occurred until his motion in 1996]. And that I’ve written about and lectured on genocide prevention at Auschwitz.

He called the alleged threats and harassment against Waterstones “absolutely despicable”.

In my opinion the whole discussion and debate has become completely irrational in the sense that this idea that the Labour Party has a particular antisemitism problem is simply not born out by the facts.

The ‘degeneration’ of discourse within parts of the Jewish community

The irony of that is that the Jewish Community, throughout history, has been the source of such diverse intellectual and political thought and that debate has always been encouraged in the Jewish community – certainly in my experience. The fact that one can no longer discuss this issue – the fact that events are being cancelled – this intolerance and refusal to discuss issues properly is deeply deeply problematic.

Feinstein pointed out that “there are a number of levels at which the debate has degenerated”. He emphasised that:

nobody asks my opinion on Zionism. Its just the fact that I’m Jewish and I support Jeremy Corbyn – that is now somehow is incompletely unacceptable to [certain] members of the Jewish community.

I’ve found as a Jewish supporter of Jeremy Corbyn the sort of abuse that is levelled at people like myself online is absolutely appalling. I’ve had the situation where I’ve mentioned my mother’s history, and a rabbi responded on social media suggesting that my mother must have been one of those Jews who collaborated with the Nazis – its insane and out of control. It really is.

He said he has found “absolutely no desire to engage on the matter”, and that:

Those propagating this notion of an antisemitism crisis in the Labour Party – they don’t want to hear anything different to their views.

Feinstein finds this “quite scary and deeply, deeply, problematic”.

Antisemitism is lower under Corbyn

I therefore believe that this whole crises has been manufactured by people who want to see Jeremy Corbyn’s leadership ended – and the irony of that is that Jeremy Corbyn is probably the most anti-racist politician of the last three and a bit decades in this country.

The Canary already reported how previous events, also to be held in Brighton with socialist MP Chris Williamson (himself a strong supporter of Palestinian rights), were also cancelled following a campaign of ‘intimidation and harassment’ unleashed onto staff at the Holiday Inn. A harassment campaign also reportedly led to the normally politically resilient Quakers pulling out as the back-up venue at the last minute.

But just as organisers persevered and found an alternative venue for the event with Williamson, so did the organisers of the launch of Bad News for Labour. They persisted, re-routed the books to the Rialto Theatre, and held a very successful book launch and discussion just around the corner. The attacks on the left in the UK are no joke, but neither is the resistance to them.