First they came for the gypsies, disabled, migrants and unions - Canary 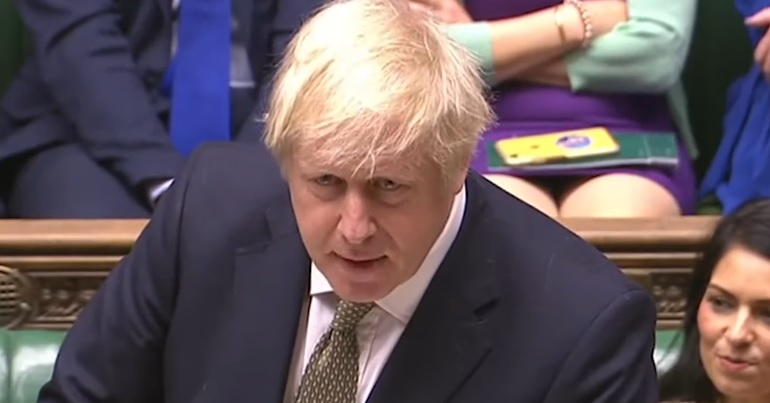 Boris Johnson’s government laid out its plan for the country in the Queen’s Speech on 19 December. The vision it has for Britain is terrifying. Not only does it confirm some of the loathsome promises made by Johnson during the election campaign, but it also contains alarming new ones.

Enemies of the people

In the plan, Johnson has reaffirmed a manifesto pledge to make living for Gypsy, Roma and Traveller (GRT) communities effectively illegal. Within the Police Powers and Protections Bill, the government will look at:

The government says the change will “strengthen the powers” police have to “tackle” unauthorised encampments. As George Monbiot has said though, this amounts to “legislative cleansing” of GRT communities. Because there aren’t enough authorised encampments in England and Wales for them, so such legislation would not only allow for the seizure of their homes, it will effectively criminalise what GRT communities do to exist.

The right to strike?

Meanwhile, the government will effectively ‘cleanse’ transport workers of their right to strike by legislating to maintain “a level of service” on transport during strikes. This could severely reduce the impact of strikes, which are meant to be debilitating in order to bring employers to the negotiating table. Plus, “Minimum Service Agreements” will have to be in place before strikes go ahead and:

To say this undermines the strength of unions is an understatement.

Both groups, GRT communities and strikers/unionised workers, are easy targets for the government – as disabled people and immigrants were before them. In fact, immigrants remain a political plaything in the plan. The government says:

Developing and reinforcing UK immigration controls and ending free movement will give the Government greater control to reduce the overall number of migrants coming to the UK, with fewer lower skilled migrants.

This is effectively a class-based system of immigration, where ‘low-skilled’ workers aren’t allowed in. So who’s going to do the low-skilled jobs? British people who probably won’t be earning £10.50 an hour because the government has confirmed its minimum wage pledge will only happen if “economic conditions allow”.

Racism against GRT communities is the last ‘acceptable’ form of prejudice, as a young woman who criticised the policy on BBC Question Time said. And unions have been vilified since Margaret Thatcher’s days. It’s no wonder the government is taking aim at them.

But once precedents are set to effectively criminalise whole communities or actions by groups within the population, it’s easy for such legislation to be tweaked and targeted at others.

Enemies of the state

Johnson’s plan also contains some moves that would severely limit people’s ability to hold his power to account. He’s, for example, aiming to repeal the Fixed-Term Parliament Act. This would allow the prime minister to call an election whenever he wants without parliament having any say in it. That could be very useful to a PM, in political terms. Meanwhile, when those politically expedient elections come around, the government’s also changing the rules so voters have to have ID. This is a barrier to voting in a system that has next to no fraud to make such a change necessary.

Furthermore, the government is considering whether to update “the Official Secrets Acts for the 21st century”. It’s also looking at updating treason laws. The Official Secrets Act determines what punishment is given to people who leak sensitive government information. Whistleblowing, or leaking, is a crucial check on power. And such checks are essential for democracy to thrive.

But updating this law has long been an aim of the Conservatives. In 2015, the then-government tasked the Law Commission with reviewing the Official Secrets Act. In 2017, the commission published some of its ideas. It wanted the maximum penalty for release of unauthorised disclosure of classified information, i.e. whistleblowing, to go up from two years in prison to potentially 14 years. And while currently the law only applies to UK citizens, the commission advised it should apply to anyone, anywhere in the world.

It also reviewed current classifications of what constitutes ‘damage’ from a leak. And it proposed that “information that affects the economic well-being of the United Kingdom in so far as it relates to national security” should be included.

The current UK government says it will look to the “final recommendations” of this same Law Commission for its ‘update’ of the Officials Secrets Act.

One powerful check on the power of the executive in the UK is, of course, the legal system. But Johnson has plans for this core safeguard in our society too. The government says:

We will set up a Constitution, Democracy and Rights Commission to consider the relationship between Government, Parliament and the courts and to explore whether the checks and balances in our constitution are working for everyone.

The legal system didn’t ‘work’ for the government for sure in recent years. It ruled that its arms sales to Saudi Arabia were illegal amid the kingdom’s vicious assault on Yemen. It also ruled that Johnson’s prorogation of parliament was illegal when he suspended parliament to push through Brexit by 31 October.

Again, it’s also a convenient time for any PM to take aim at the legal system and other institutions. People eager for Brexit to be done and dusted may well feel animosity to courts for the prorogation ruling. They may also feel like parliament deserves a kicking for its role in the Brexit debacle.

But the “checks and balances” these institutions and mechanisms provide are vital.

Minorities, empowered workers, elected politicians, whistleblowers and effective courts are all essential features of a diverse and functioning society. They are part of the reason we call ourselves a democracy. If the government weakens, axes or cripples these things, we can’t claim to be one any more. In fact, that sort of oppressive and dictatorial society would be more aptly described as an authoritarian state.

It’s time for us to stop singing God Save The Queen and start asking her/him to save us all. It looks like we’re going to need it.