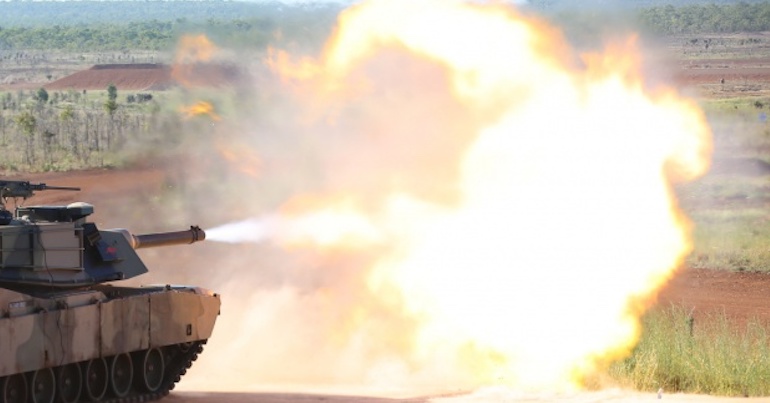 An important new report calls on the government to end its focus on military power in order to deal with the climate crisis. On 3 March, Campaign Against Arms Trade (CAAT) will present the report to parliament. As the group notes, the UK government “spends more than twice as much on military” as it does on taking climate action. The report calls for a radical change in the way the government allocates money, in order to tackle climate crisis: “the most urgent threat to human security worldwide”.

The report, written by CAAT’s research coordinator Dr Sam Perlo-Freeman, is called Fighting The Wrong Battles – How Obsession With Military Power Diverts Resources From The Climate Crisis. Although the rationale behind military spending is to protect security, current global issues have shifted the meaning of security beyond national borders.

The climate crisis is not only an environmental crisis, it is also one of human security. It is already causing catastrophic damage and loss of life worldwide. The recent floods have shown how ill-prepared UK infrastructure and government responses are today. As climate change worsens then so will the impact of floods and extreme weather events.

The press release also states that the UK government:

spends more than twice as much on the military as it does on mitigating climate change. The report argues that ‘The balance of priorities for these two areas of spending should be clear. Climate change represents an existential threat to the UK and the world. Loss of the UK’s status as a global military power does not.’

CAAT stresses that the climate crisis should now be the “first duty of government”. Because as it says, military spending won’t “address the real threats to human security which are largely not ones that can be addressed by military power: these include disease, natural disasters and growing inequality”.

But what is security? For whom, and from what?

It also notes that because our government views “security through a military lens”, it fails to acknowledge bigger “real” global security threats. The most urgent of these is the climate crisis, which isn’t “susceptible to military force”. And, as the report notes, most “military interventions by the UK and its allies” have actually “had an overwhelmingly disastrous impact on peace and security”.

Although military spending far outweighs investment in tackling climate breakdown, many in the current government still want military spending to increase to “as much as 3% or even 4% of GDP”. UK military policy and spending centres around an assumption that “the UK must be prepared to engage in major overseas military interventions”. According to this report:

It is therefore not simply a strategy of ‘defence’, of the UK or its close allies, but of aggressive militarism, showing a willingness to repeat interventions of the type of the Iraq war.

The report also makes a powerful cross-party challenge. Because currently, “all major UK political parties support” NATO’s “minimum target of 2% of GDP for military spending”. Collectively, NATO members already “account for more than half the world’s” spending on arms deals and military spending. For all members to meet the 2% target requires another $116bn of spending per year. The report challenges this as “implausible” in the face of climate breakdown.

Meanwhile, despite the UK’s promise to achieve “net zero carbon emissions by 2050”, it’s still failed to meet current “emission reduction measures”. A 2019 report from several NGOs recommended “increasing annual spending on “climate and nature” from £17 billion a year to £42 billion, just under 2% of GDP”.

But it’s “striking”, this report notes, “that the maximum spending estimate” to tackle climate chaos, equates to what the government “considers to be the bare minimum requirement for military spending”. It calls this “a gross distortion of priorities”. So CAAT calls for a “fundamental reassessment” of both thinking and resource allocation:

towards a vision of sustainable security that is holistic, people-centred, interdependent, and focused on the root causes of insecurity, especially the climate crisis. To make this paradigm shift requires jettisoning the persistent delusion that the UK can bring peace to the world through a global military presence involving massively expensive weapons systems and major military interventions.

“We must focus on the real threats to human well-being”

If we are to make the changes that are needed, that means moving towards a vision of climate justice and sustainable security. We must focus on the real threats to human well-being, recognise the interdependence of security for people around the world, and ensure that our economic systems remain within the bounds set by nature.

From wildfires in Australia, UK floods and rapidly melting sea ice, it’s clear that the impact of climate breakdown is with us right here, right now. This important report is a vital warning. There’s no point spending money on arms and military for a planet in crisis.