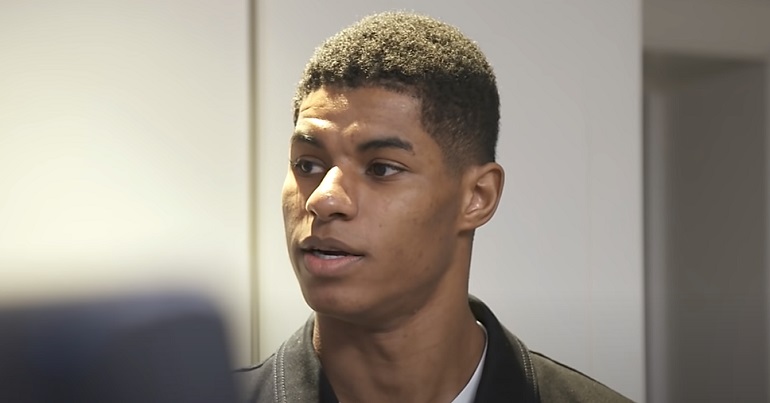 Footballer-turned-campaigner Marcus Rashford has added his voice to the fight against the Tories’ Universal Credit cut. His intervention comes as activists plan protests and more evidence of the cut’s devastating effects has come to light.

The Canary has been documenting the chaos surrounding Universal Credit. The Department for Work and Pensions (DWP) will be cutting £20-a-week from claimants in a matter of days. It will hit various people hard, including 660,000 low-paid key workers, 3.4 million children, and six out of 10 lone parent families. The cut will plunge a further 500,000 people, including 200,000 children, into poverty. Trade unions and campaign groups have expressed fury over the cut.

Meanwhile, The Canary recently reported that Citizens Advice has warned of more misery for claimants. Its research found that the cut could force as many as 1.5 million working people into hardship this winter. Citizens Advice found that two-thirds of working claimants are bracing themselves to face hardship when the Tories cut Universal Credit at the end of the month. Their financial fears include struggling to pay their bills, getting into debt, or being forced to sell belongings to make up for the shortfall in their income.

Another quarter of working claimants could face even greater difficulties. Citizens Advice found that as many as 600,000 working claimants are worried they might not be able to afford food or other basic necessities like toiletries after the reduction in their income is introduced.

As part of a campaign with charity the Food Foundation, Rashford is encouraging people to write to their MPs and tell them to end child food poverty. You can use the Food Foundation’s online form to do that here. The letter encourages MPs to support Rashford and the charity’s plan. This includes expanding Free School Meals and funding more free holiday clubs.

On the Tories’ Universal Credit cut, Rashford told the Mirror:

Instead of removing vital support, we should be focusing on developing a long-term roadmap out of this child hunger pandemic.

On October 6, millions lose a lifeline. It’s a move that Child Poverty Action Group says will raise child poverty to one in three.

Rashford is not the only one taking action.

Grassroots disability rights group Disabled People Against Cuts (DPAC) is currently directing a week of action over the Tories’ governance. On Friday 24 September, it held an online rally. Speakers included filmmaker Ken Loach and disability rights activist Paula Peters. It’s also holding two protests in a matter of days. On Tuesday 28 September, DPAC is organising an “audio riot” outside Kings Cross station, in the courtyard in front of it, from 11:30am. Then, on Thursday 30 September at 5:30pm, it and other groups will be protesting outside Downing Street. You can find out more here.

On top of all this, think tank the Resolution Foundation recently issued a stark warning. It said inflation, rising energy bills, the looming rise in National Insurance, and the Universal Credit cut could leave low-income households more than £1,000 a year worse off. That’s even after accounting for increases in the minimum wage. Plus, another study has found that councils could place 1,500 more children into care each year due to the cut. And there could also be 5,500 more children on child protection plans.

Currently, the Tories are not budging. Transport secretary Grant Shapps indicated on TV on 26 September that nothing had changed. But the DWP and the Treasury are reportedly considering changing the rules for working claimants. This could let them keep more of their earnings, though it’ll do nothing for sick and disabled people, carers and lone parents who can’t work, among others.

However, collective action from Rashford, DPAC and others could well apply enough pressure for a last-minute Tory U-turn. Now, millions of families will wait to see if this happens.