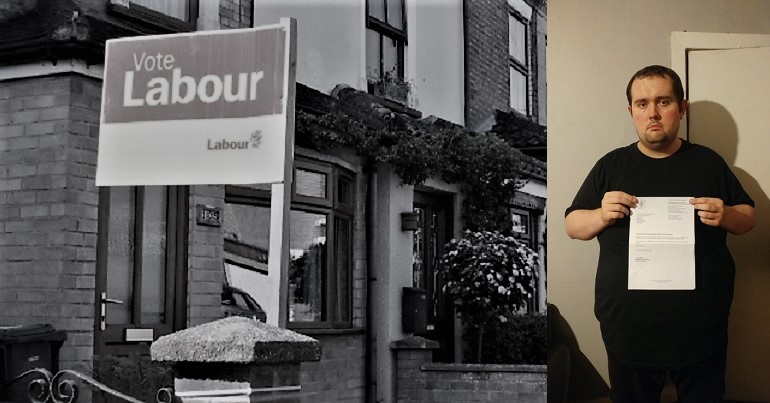 A Labour council is trying to force a family to permanently leave their home on Boxing Day. But the two brothers in question have done nothing wrong. Because the council is telling them to leave on a technicality – even though one of the brothers lives with Asperger’s syndrome. And to make matters worse, the effective eviction comes after both their parents died.

Sean and Andrew Brogan live in West Lancashire. The home is a council property, managed by Labour-led West Lancashire borough council. Andrew, who lives with Asperger’s syndrome, has always lived there. But they now face the prospect of the council kicking them out – essentially because both their parents died.

The brothers’ father passed away at the start of the coronavirus (Covid-19) pandemic. Brogan had moved in at this point to help his family. As he wrote:

This in its own right was an extremely difficult time as our mother was suffering quite severely with long Covid-19 as a result.

Fast forward to the 14th of November, my mother unfortunately passed away from a massive heart attack.

Losing both parents within a short space of time is trauma enough for anyone to deal with. But then, West Lancashire borough council piled more stress on top of this.

Due to my mother being the only named tenant on the tenancy, the council have issued a “Notice to Quit” which effectively runs out on the 26th of December.

The Canary has seen the council’s letters to the brothers. Website the Tenants Voice describes a Notice to Quit as:

a legal tool, which the landlord can use to regain possession from a property which is let under an Assured Shorthold Tenancy. It gives the landlord the right to request you to leave the property… This is the first step of the eviction process, but it itself is not considered an eviction.

So, the brothers don’t have to leave on Boxing Day. But if they don’t, the council can then get a court order to formally evict them. Brogan has started a petition, which you can sign here.

The brothers got the Notice to Quit on 29 November. Brogan told The Canary:

I felt utterly devastated that nobody in the council seemed to be listening. For Andrew, he felt distraught, betrayed, worried and scared about what was about to happen.

Andrew’s situation is exacerbated by the fact he lives with Asperger’s syndrome. This means he needs to stay in familiar surroundings for his wellbeing. Brogan wrote that:

the only suitable place that he can reside in is within the home he has lived in since he was born as it is familiar and safe to him. This has been the family home since 1958.

Trying to kick the brothers out on Boxing Day seems unconsciously cruel. But the council legally can. This is because the family’s tenancy was originally a joint one between the brothers’ parents. When their father died, their mother inherited it though a process called “succession“. This process of inheriting a tenancy agreement can generally only happen once. So, in theory, Andrew doesn’t have any right to the tenancy. Brogan confirmed that the council refused their request for a further tenancy succession.

He told The Canary that if the council do evict them:

I’ve not really thought that far ahead. I guess we’d have to stay with my sister and apply for overcrowding.

He feels let down by the council and that it has treated him and his brother:

Appallingly, to be honest. The communication has been terrible and we are no closer to knowing what is happening

The Canary asked the West Lancashire borough council for comment. It had not responded at the time of publication.

The brothers’ situation is not really uncommon. For example, this writer knows someone who was also in the same situation where their landlord tried to kick them out after their mother died. They challenged the landlord and won.

Brogan said of his and his brother’s situation:

I hope the things that are being done to us can be used in a good way to promote change for those who go through a similar situation.

The brothers’ situation is awful. And while the Labour-run council is acting within the law, it clearly should take their circumstances into account. West Lancashire borough council must now do the right thing and let the brothers stay in the family home.

Sign the brothers’ petition asking the council to let them keep their home.