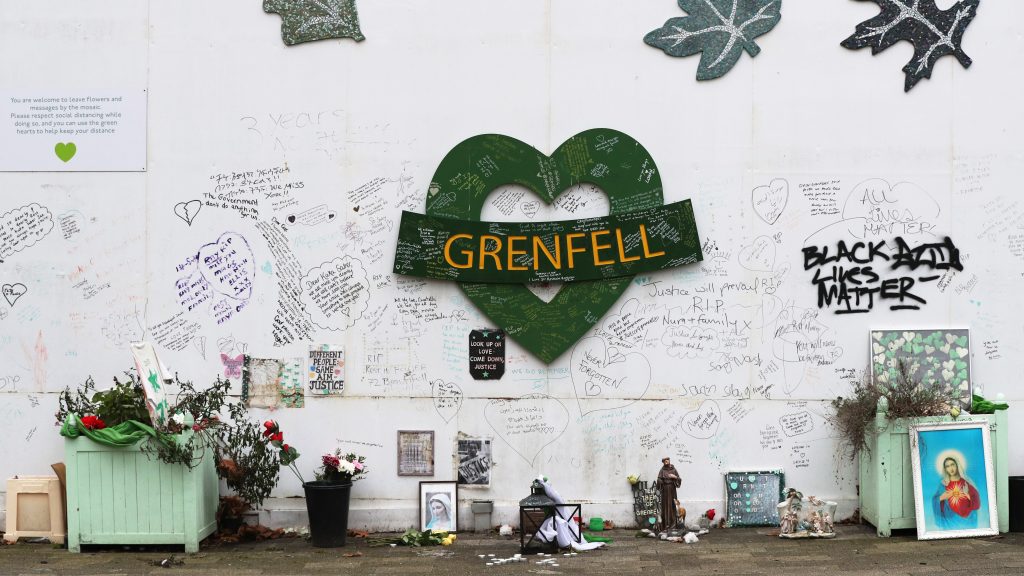 Mistakes and missed opportunities by the government to learn from previous fires created the environment for the Grenfell Tower blaze, the public inquiry into the disaster has heard.

Finally, the Grenfell Inquiry starts to identify some of the real culprits. pic.twitter.com/JRklma1INQ

The Department for Levelling Up, Housing and Communities apologised for past failures in oversight of the system regulating safety within the construction industry and the supervision of building control bodies. A lawyer for the department said the government will continue to engage “proactively, openly and fully” with the inquiry. Meanwhile, people are pointing out that while all this goes on, significant change has not materialised since the tragedy:

It's four years since Grenfell. The cladding is still up, and Britain's housing crisis is deeper than ever.

Phase two of the probe is examining how the block of flats in west London came to be coated in flammable materials that contributed to the spread of flames, which shot up the tower in June 2017, killing 72 people. Module six of this phase is concerned with building regulations and the published guidance on fire safety, including detailed consideration of government policy in this area.

Jason Beer QC, representing the department, said it believes it “must examine its own conduct and candidly accept mistakes, errors and omissions when the inquiry identifies them”. He told the inquiry on 7 December:

The Department is deeply sorry for its past failures in relation to the oversight of the system that regulated safety in the construction and refurbishment of high-rise buildings.

It also deeply regrets past failures in relation to the superintendence of the building control bodies, which themselves had a key role in ensuring the safe construction and refurbishment of such buildings.

It apologises to the bereaved residents and survivors of the fire for such failures.

He said the government, as well as the public and residents of the tower, had trusted that “those constructing and approving high-rise blocks and supplying the products used in them were following the law and doing the right thing”.

This trust was “both misplaced and abused”, he said, adding:

The Department greatly regrets that it took the Grenfell Tower tragedy to lay bare this misplaced and abused trust.

He said it is accepted that the Department “should have done more to take on board the learnings and recommendations triggered by other fires” as well as addressing “in a timelier manner” correspondence from the All-Party Parliamentary Group on Fire Safety which had raised issues.

Individually, these errors and missed opportunities from the Department and across industry may not have caused the fire at Grenfell Tower, but cumulatively they created an environment in which such a tragedy was possible.

Had there been a functional enforcement system with efficient assurance built in, non-compliance to the extent that gave rise to the Grenfell Tower tragedy may not have been possible.

The FBU has always been clear that those at the very top of government have questions to answer.https://t.co/3tbVy9vaBo

The inquiry has previously heard from a lawyer for the families of survivors and relatives of the bereaved who stated that the Grenfell fire occurred partly as a result of an “unbridled passion for deregulation”, with a desire to boost housing construction having led to the industry being allowed to exploit regulations.

Hearings have adjourned for the day and will resume again on Wednesday 8 December at 10:00. All evidence, transcripts and videos can be found on this link: https://t.co/qnheJPrkdX

Matthew Butt QC, for the National House Building Council (NHBC), said it is “crucial” that the construction industry learns from the Grenfell fire.

Companies linked to the Grenfell Tragedy have made pre-tax profits of £6.7 billion since the fire and paid out dividends of £3.1 billion.
Where is the justice for the families?

The body acknowledged it should have acted more swiftly “and been more assertive” with manufacturers, and accepted that some industry assessments had not been “as rigorous as they should have been”, he told the hearing.

The Building Research Establishment (BRE), which also features in module six, is prepared to learn from any findings which show it could have done things better, the inquiry heard.

Samantha Leek QC, representing the organisation, said health and safety “are in essence at the very core of what BRE does – to some extent they are its very raison d’etre”.

Where this module shows that there are matters which could have been done better, BRE will acknowledge them, accept them and learn from them.

In 2020, the BRE was accused of “helping manufacturers to misleadingly market their insulation products as safe for high-rise buildings”.

The inquiry was adjourned until Wednesday at 10am.