A Freedom of Information (FOI) request has revealed the rot at the heart of parts of the medical establishment. It shows text messages and emails where individuals from not only the NHS but also supposedly prestigious Royal Colleges were trying to interfere and exert influence over decisions at the non-departmental, independent public body the National Institute for Health and Care Excellence (NICE). The revelations were uncovered by a chronically ill writer, and they paint a picture of attempted subversion of NICE procedures and potentially even corruption.

As The Canary previously wrote, NICE has been at the centre of a storm over its myalgic encephalomyelitis (ME, sometimes called chronic fatigue syndrome, CFS) guidelines. It had not updated them since 2007. In short, NICE has been drawing up new treatment guidelines. But the process has proven contentious. This is because NICE planned to remove a treatment called graded exercise therapy (GET). It’s been shown to cause harm to ME patients. NICE was also shown to be downgrading the effectiveness of cognitive behavioural therapy (CBT) for ME patients. You can read the full background on GET and CBT here.

NICE was due to publish the final version of the guidelines on 18 August, but it pulled them at the last minute. This was due to organisations like Royal Colleges and NHS England not agreeing with the new guidelines. So, NICE held a round table event with stakeholders on 18 October to try and reach an agreement. It then published the final guidelines on Friday 29 October. But some of the Royal Colleges still objected to the new guidelines. This is because there are parts of the medical profession which still believe GET and CBT should be used on ME patients.

At the time, it was clear that the Royal Colleges and NHS England were trying to stop NICE removing GET and CBT from its new guidelines. As former barrister and person living with ME Valerie Eliot Smith wrote about NICE pulling the 18 August publication:

It became clear that this eleventh-hour development was the result of external interference by representatives of the Royal Colleges and NHS England who were opposed to the new guideline. This is in direct contravention to NICE’s own prescribed procedure and such an action at this late stage should have been impossible.

Now, thanks to an FOI from an independent journalist and person living with ME – we know exactly what some members of the Royal Colleges and NHS England were telling NICE – via emails and text messages.

The extent of the interference revealed

Dom Salisbury is a scientific researcher and editor who lives with ME. He has been ill with the disease since at least 2016 and had to give up his chosen profession. Now, he writes on his own website. And recently, he has taken on the situation with the Royal Colleges and NHS England’s lobbying of NICE. Salisbury sent NICE an FOI. He asked it for all correspondence between it and “professional bodies or individuals (guideline stakeholders or otherwise)” that related to NICE’s decision to halt publication of the guideline. Salisbury asked NICE for this between 29 March and 17 August 2021. After a delay from NICE and Salisbury having to ask it to conduct an internal review, it finally released the documents to him.

They document communications sent by people to NICE CEO Gillian Leng as well as its director of the centre for guidelines Paul Chrisp. Communications were sent to Leng and Chrisp by unnamed individuals from:

This shows the extent to which individuals in these organisation were concerned about NICE’s new guidelines. But it’s the detail contained in the FOI which really shows what can only be described as attempts by individuals to corrupt and/or derail NICE’s guidelines – and its impartiality on the issue.

You can read Salisbury’s full analysis here, and the links to the documents NICE released are here. Some of the headlines from Salisbury’s analysis include: 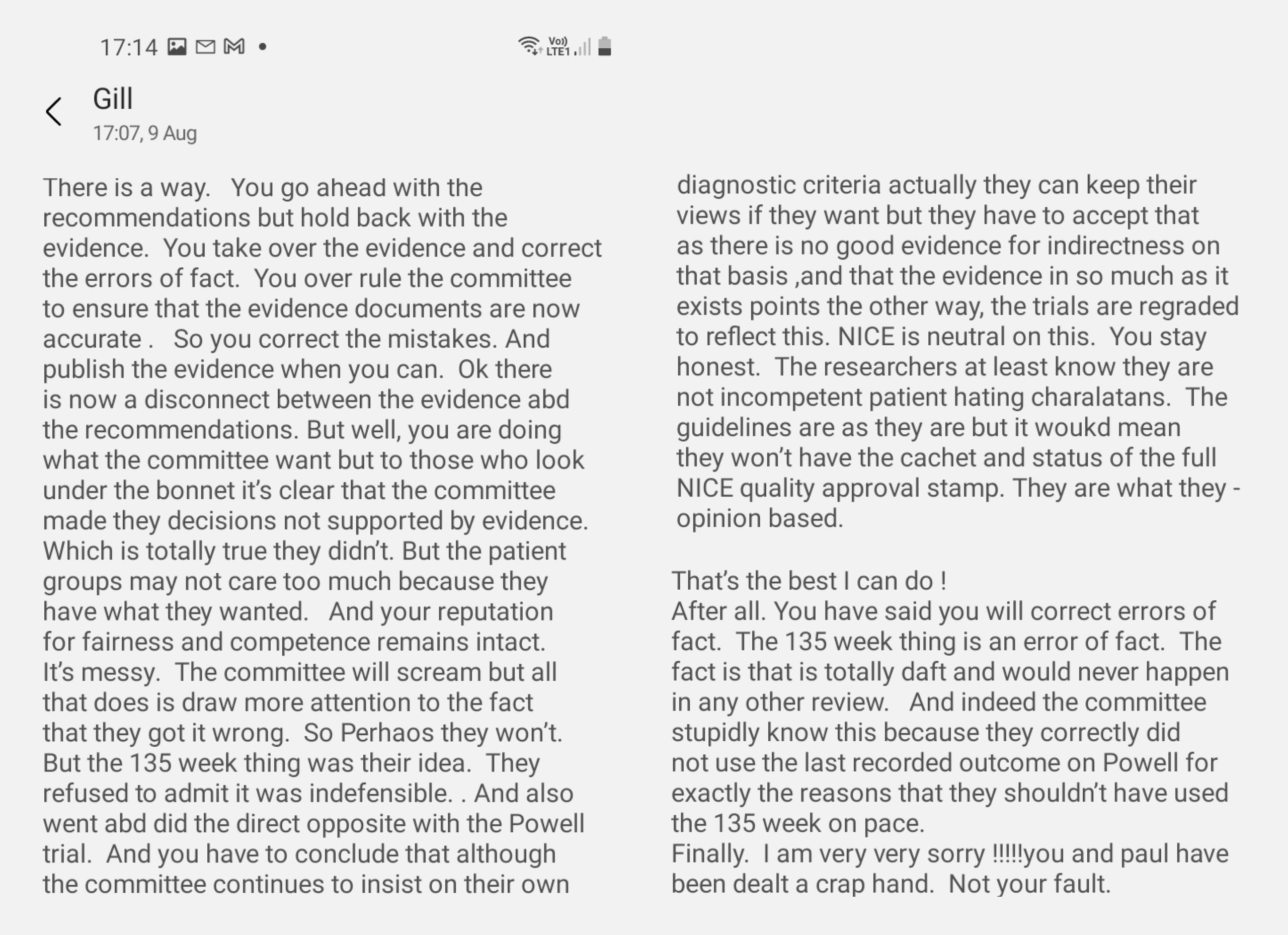 Then, there’s an email from the same individual at NHS England/NHS Improvement. They said that they thought it was “extraordinary” NICE approved the guidelines; that the committee excluded trials (presumably relating to GET, the PACE trial) for “spurious” reasons, and that the resulting guideline was “fundamentally biased”. They also said the guidelines:

Appallingly… tell patients… there is nothing to ‘cure’ ME

NICE said this because so far there is no recognised cure for ME. Moreover, the person from NHS England/NHS Improvement goes on to say that they themselves have “no interests in the condition (ME/CFS)”, anyway. For someone who has no interest in the disease, they seem to have strong opinions on it – so far as peddling false information about a cure.

The Canary asked NICE for comment. A spokesperson said they “won’t be making any comment on this”.

A RcPscych spokesperson told The Canary:

The RcPscych… has 19,000 members worldwide. But only elected officers are entitled to speak on its behalf. As the person or persons who apparently made these comments are unnamed – the College is unable to comment.

Us and other colleges have been open and consistent in expressing concerns regarding the evidence review and other aspects of the guidance. These concerns were expressed through official channels during the consultation, and can be found here.

The Canary also asked the RCP for comment, along with NHS England and NHS Improvement. None of these organisations had responded, despite two requests, at the time of publication.

I’m not shocked. There’s an almost tedious, comical predictability to the information revealed as it shows exactly the type of activism, lobbying, and influence the ME community has been up against for decades. As patients, we ask only for a level playing field; let (good) evidence speak for itself. Instead, we’re up against a small cabal of highly-placed individuals, including researchers and clinicians, who are concerned not with the guideline recommendations per se, but rather with protecting what’s left of their reputations and their disastrous trials, and with further embedding the overreach of psychology and psychiatry in the so-called ‘treatment’ and ‘care’ of patients with ME/CFS and other poorly-understood chronic conditions.

I’m glad NICE made the right decision in the end, but I worry that this sort of interference may have influenced the outcome of guidelines for other conditions such as chronic pain and long-Covid.

A sordid tale of attempted subversion and corruption?

The revelations from Salisbury’s FOI cannot be described as anything but individuals trying to subvert the processes of a non-governmental, independent public body. You could say that this was potential corruption, given that the individuals concerned were specifically targeting the bosses of NICE’s guidelines committee.

This level of interference and attempts at corrupting NICE procedures and processes is shocking. But moreover, it provides a snapshot into what goes on behind the scenes of supposedly independent public bodies. And it all begs the question: if this is the kind of behaviour from individuals that we now know about – what on Earth has gone on that we’re not privy to?