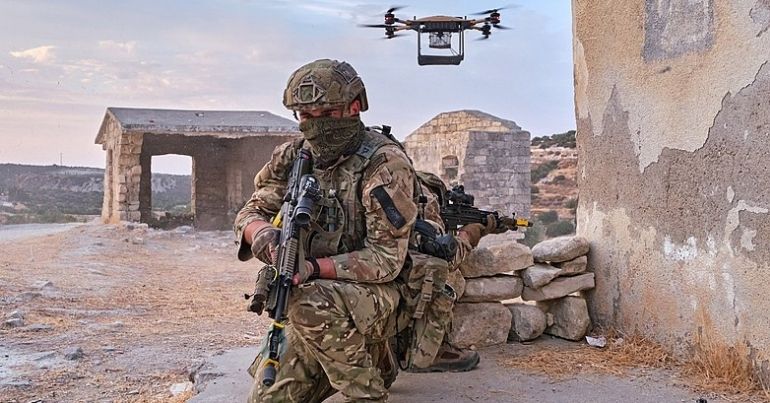 More deployments, a more aggressive approach, and more intense state vs state conflict. This is the dystopian vision laid out by the new head of the British military admiral Tony Radakin. He’s the man who just replaced general Nick Carter as chief of the defence staff.

In a speech at the Royal United Service Institute, Radakin said “British national interest” should become a guiding principle once again. He added that preparing for state-on-state conflict and competition were the order of the day.

One of his top priorities, Radakin said, is more military deployments:

It is about having formations, units, platforms, systems and people that are both more deployable and deployed more, whether at home or abroad. This follows from our conclusions about constant strategic competition. We need to be more active and engaged to achieve the deterrence, stability and prosperity at the heart of our national strategy.

He added that he didn’t want troops frustrated in barracks but out in the world acting as ambassadors:

Our forces need to be out in the world supporting British interests, deterring and shaping on a continuous basis. This is what our politicians demand, and it gets after the frustrations felt by our people when they find themselves stuck in barracks or delayed by training or equipment when they should be deployed as ambassadors for Global Britain – shaping, training and influencing.

Military forces were a key part of British life, he said. Referring to the military as central to communities around the UK.

Our air stations and garrisons, our dockyards and training schools, are the life blood of so many communities. We invest billions into aviation, shipbuilding and other high-tech industries, in every region and every community across all of these islands. We’re the experts at levelling up. We’ve been doing it for centuries and we’ll be doing it long into the future.

Radakin also tried to connect three key Tory slogans to the military’s overall aims. The projects for levelling up, for strengthening the Union, and for a global Britain.

And it must be recognised that our interests at home and abroad are linked. Global Britain. Levelling Up. Strengthening the Union. These aren’t campaign slogans or catch phrases. They are the policy of the Government and are bound up with our defence and security.

Radakin also veered into a rather fantastic vision of Britain as a serious global power. He hyped the country’s alliances and lauded it’s supposed values:

The rest of the world see us for who we are. A permanent member of the UN Security Council. A nuclear power. A trading power. The world’s fifth largest economy. A strong, powerful country but outward looking, cooperative and generous too.

The speech overlooked the increased aggression of the UK and her allies in, for example, the Indo-Pacific region. It also overlooked the role of the UK media in the project. For example, this BBC report uncritically hyping the UK foreign policy position which was spotted by investigative journalist John Pilger:

I post this as a striking example of the kind of 'journalism' the BBC dispense as unabashed PR. This monstrous, dated warship has been sent to provoke China, which is not our enemy but is nuclear armed. Not a single challenge to the 'commodore' as he rattles off his nonsense. https://t.co/Ejv7Nfxzg0

Radakin’s vision is meant to be optimistic. In truth, it looks rather dystopian. It seems to spell more overseas operations despite failure in recent ones like Afghanistan. The arms trade is presented as a point of national pride. A deeper integration of the military into our communities is proposed as a bid to hold a creaking union together. And, above all, it forwards a plan for interacting with the world that’s based on a fantasy vision of British global power.