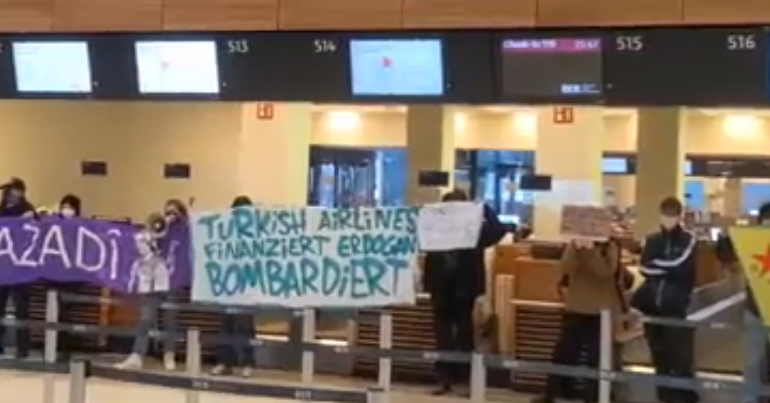 This week, supporters of the Kurdistan Freedom movement have called for action against Turkey’s ongoing assault.

Turkey is reported to have been using chemical weapons in its attacks on Kurdistan Worker’s Party (PKK) guerillas in the mountains. Videos like this one – taken in the mountains of Iraqi Kurdistan – have been circulating. Antifa Enternasyonal tweeted in October:

URGENT! To those people that don't believe that the #Turkish fascist state is using chemical weapons against the #Kurdish guerrilla freedom fighters, look!

Take a good look at this video! Dozens of young brave comrades have fallen to the use of forbidden weapons! pic.twitter.com/jK36wdRLig

The PKK has been involved in guerilla warfare against the Turkish state for over 44 years now. It is demanding freedom and democracy, and has proposed to replace the state system with a system of federated direct democracy known as democratic confederalism.

The chemical attacks by the Turkish state are by no means new. In October, the Canary published this interview with bereaved families of guerillas who had fought the Turkish state. One of them told Canary contributor VZ Frances:

When I talk about my son who was martyred, he died with 16 others in Dersim. When we found them, there were no wounds. We were able to get only 3 bodies out of the 16 martyrs. They were killed by chemical weapons. When their bodies were found, their eyes were completely filled with blood.

Since the state knows that these chemicals can only be analysed up to a certain point after death, they refuse to give up the bodies. It has been 4 years. There were many attempts within those 4 years, with no response.

However, the reports of the use of chemical warfare against PKK guerillas have been steadily increasing.

People have been tweeting footage of the attacks under the hashtags #WeSeeYourCrimes and #YourSilenceKills. International campaign group Rise Up 4 Rojava tweeted:

In Vienna, on 30 November, hundreds demonstrated outside the Organisation for the Prohibition of Chemical Weapons (OPCW), demanding that it launches an investigation:

Some hundreds of people today in #Vienna in front of @OPCW protesting turkish use of chemical weapons in #Kurdistan and demanding an official investigation. https://t.co/JPnXKLza4d

Also on November 30, a group of international academics, campaigners and others published an open letter to the OPCW demanding that it investigates the attacks.

Meanwhile, Turkey’s attacks on Rojava – the part of Kurdistan within Syria’s borders – continues. The Turkish military has been engaged in heavy bombardments of Rojava since Saturday 19 November. Turkey is trying to crush the revolution that has been taking place there since 2012. It has already launched two major invasions, in 2018 and 2019, and is occupying parts of north and east Syria.

The Syrian Democratic Forces (SDF) released a statement on 29 November, condemning the ongoing attacks. It says:

The Turkish occupation continues the brutal attacks on the north and east of Syria, targeting the lives of more than 5 million indigenous people and hundreds of thousands of IDPs [internally displaced persons] from other Syrian regions. The recent Turkish aggression has entered its tenth day and caused extensive damage to the population’s farms and properties and civilian infrastructure

The current attacks, dubbed ‘Operation Claw-Sword‘ by the Turkish military, are a coordinated offensive against both Rojava and Iraqi Kurdistan.

According to the SDF, many villages in the north and east of Syria have been hit with artillery shells, tank shells, and mortars.

Turkey has been accused of deliberately targeting camps where thousands of Daesh (ISIS/ISIL) members are being held, in order to facilitate their escape. The bombing of Al-Hol camp led to the deaths of eight members of the SDF, and at least six Daesh prisoners escaped – but were later rearrested. The region is now on high alert to defend against attacks by Daesh sleeper cells.

Turkey’s “military escalation” has been criticised by US officials. The US has forces in north and east Syria, and coordinates with the SDF.

However, SDF commander Mazloum Abdi has called for a stronger statement from the US.

Russian military officials have also called for “de-escalation” by Turkey, and Russia has reportedly sent reinforcements to the region.

However, Turkey and its allies seem to be pushing ahead with the threat of ground attacks, with several assaults on the Manbij region – by mercenaries allied with Turkey – reportedly being repelled in the last few days.

Preparations for a full ground offensive seem to be ongoing:

As these moves by military powers play out, people at a grassroots level all over the world are answering a call to ‘Defend Kurdistan’. Several blockades of Turkish Airlines counters have taken place at European airports:

Meanwhile, actions and mass demonstrations have been held in many European cities:

Solidarity against the attacks even came from as far away as Mexico:

Demonstrations have been held in London, Bristol, and Leeds against UK arms sales to Turkey, and in support of the uprising in Rojhelat (the area of Kurdistan within Iran’s borders):

Extended coverage of the weeks Actions on our new website:https://t.co/Wa9UBdbqeQ#DefendKurdistan

Bristol Kurdistan Solidarity Network is holding a demonstration against Boeing on 1 December, protesting the company’s supply of weapons to Turkey.

Turkey is attempting to stamp out a revolution right now in Kurdistan – a revolution which represents the struggle of people against states and against fascism. Those resisting the current attacks deserve our support and solidarity. Check out the Kurdistan Solidarity Network and Rise Up 4 Rojava on Twitter for news of demonstrations and how to get involved.