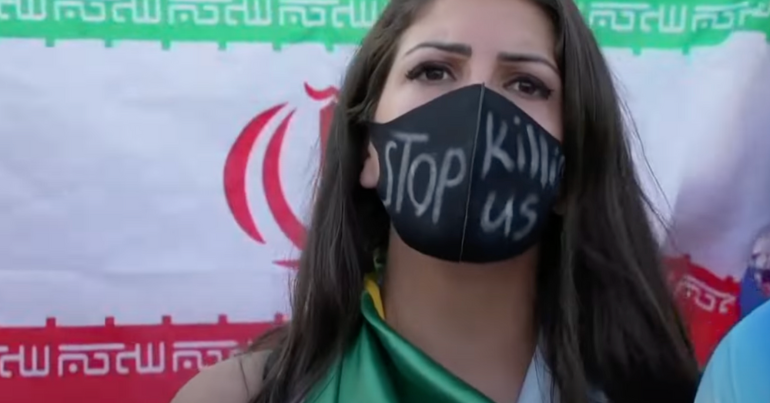 Iran was knocked out of the World Cup by the United States in Qatar on Tuesday night, drawing a mixed response from pro- and anti-regime supporters. Many Iranians refused to support the national team in response to a bloody government crackdown on more than two months of protests sparked by the death in custody of Jîna Mahsa Amini.

Caught between the clerical regime and calls to show solidarity with protesters, the national team pressed near-relentlessly in the second half on Tuesday night, but were unable to cancel out a 38th minute opener by the US, resulting in an early exit. That prompted the extraordinary spectacle of Iranians cheering a defeat inflicted by the Islamic republic’s arch-enemy, often labelled the “Great Satan”.

Inside Iran, celebrations were especially marked in the western Kurdistan province, the cradle of a movement sparked by the death of young Kurdish woman Mahsa Amini. A video shared online by Kurdish activist, Kaveh Ghoreishi, showed a Sanandaj city neighbourhood at night with sounds of cheering and horns blaring after the United States scored.

That goal also prompted joy in Amini’s hometown of Saqez, according to the London-based news website Iran Wire, which published images showing fireworks and sounds of people cheering. Protesters also set off fireworks in Mahabad, Kurdistan, following Iran’s loss, according to videos shared online. Meanwhile, the Norway-based Hengaw human rights group also reported celebrations there and in the city of Marivan.

The scenes of joy were not confined to Kurdistan province, reflecting the nationwide nature of the protest movement. Videos on social media showed citizens celebrating in the capital Tehran and Ardabil, Mashhad, Kerman and Zahedan – many with people dancing and cheering in the streets amid long traffic jams.

There was soon punishment for these celebrations, however. An Iranian man was shot dead by security forces after celebrating his national team’s exit from the World Cup, rights groups said on 30 November.

Mehran Samak, 27, was shot dead after honking his car horn in Bandar Anzali, a city on the Caspian Sea coast, northwest of Tehran, human rights groups said. Samak “was targeted directly and shot in the head by security forces… following the defeat of the national team against America”, said Oslo-based group Iran Human Rights (IHR). The New York-based Center for Human Rights in Iran (CHRI) also reported that Samak had been killed by the security forces while celebrating.

Iranian international midfielder Saeid Ezatolahi, who played in the US match and is from Bandar Anzali, revealed that he knew Samak. He posted a picture of them together in a youth football team. Ezatolahi described Samak as a “childhood teammate” on Instagram, and said:

After last night’s bitter loss, the news of your passing set fire to my heart.

He did not comment on the circumstances of his friend’s death, but did say:

Some day the masks will fall, the truth will be laid bare.

The CHRI published a video from Samak’s funeral on Wednesday. Mourners could be heard shouting “Death to the dictator”. The chant was aimed at Iran’s supreme leader Ayatollah Ali Khamenei, and is one of the main slogans of the protests that flared after Amini’s death in custody on 16 September.

IHR said that the authorities had refused to hand the body over to the family, while BBC Persian said the funeral in Bandar Anzali had gone ahead without prior announcement, and with a heavy security presence in a bid to avoid major incidents. As the Canary reported earlier this week, Iran’s security forces have killed at least 448 people in the crackdown on the protests, including 60 children under the age of 18 and 29 women, according to IHR.

Iran’s players, after refusing to sing the national anthem for their opening game against England in a gesture of solidarity with the protests, reversed that stance for their second game with Wales, resulting in opprobrium in some quarters. Players again voiced the anthem, albeit with little enthusiasm, for what turned out to be Iran’s final game.

They now go home to a country that remains on edge, as authorities crack down on the mainly peaceful protests that have become the biggest challenge to the regime since its birth in 1979.