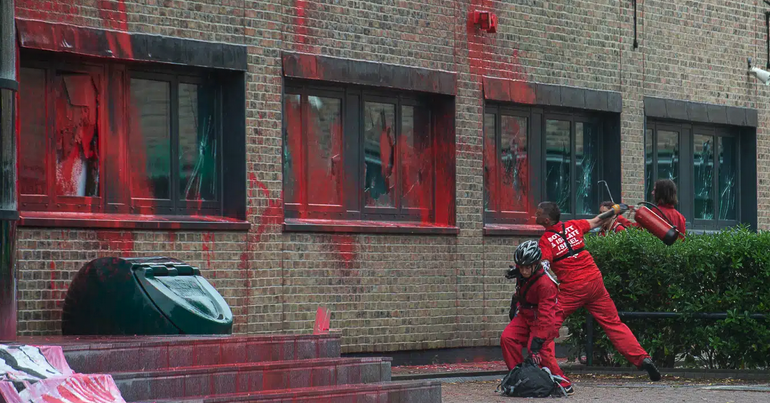 The minister of defence procurement Alex Chalk has confirmed that the government has ejected Elbit Systems from a £160m contract. The news follows significant third quarter losses for the Israeli weapons company, putting its future in the UK in doubt. Activist group Palestine Action, meanwhile, is taking credit for a successful campaign against the manufacturer. Elbit Systems supplies 85 percent of Israel’s drones, with large parts of its infrastructure currently based in the UK.

The ‘end in sight’

The work that Elbit Systems lost is a £160m contract to deliver training for a Dreadnought-class submarine crew. Chalk additionally confirmed that there are ongoing negotiations for Elbit to depart from a £123m contract for Project Selborne navy training. According to Chalk:

This has not happened because of any specific issues with Elbit Systems UK or any wrongdoing on their part but rather a result of applying revised operational sovereignty standards for the UK’s highest priority capabilities.

Some have questioned this, however. Andrew Feinstein is an arms industry expert and author of The Shadow World: Inside the Global Arms Trade. Reacting to these latest developments, he said:

The loss of these contracts is a major crisis for Elbit and raises questions about the future of the controversial company in Britain. The government claims that it has happened as part of a ‘sovereignty’ drive, but the reality is that many other foreign defence companies continue to play vital roles as suppliers of equipment and services to the UK’s armed forces. I strongly suspect that they have lost these contracts as a consequence of the Direct Action group Palestine Action having so successfully revealed the brutal reality of Elbit’s gross human rights abuses, especially in enforcing the illegal occupation of Palestine by Israel. Not that the UK government will ever admit this.

Activist and rapper Lowkey similarly commented on the situation:

Following the targeting of Elbit sites in England by Palestine Action, the British Ministry of Defense is cancelling £280 million worth of contracts with Israel's largest weapons company, Elbit Systems.

The company's share price has fallen 17% in one month.

He also praised the actions of activists before finding himself blocked by Elbit on Twitter:

Was it something I said? pic.twitter.com/FUtP0jIz0y

The Canary has previously reported on Elbit Systems, writing:

Elbit is Israel’s largest private arms manufacturer and produces up to 85% of Israel’s drones. These drones have massacred Palestinians in Gaza. The company is also responsible for manufacturing small-calibre ammunition for the Israeli army. Direct action campaigners are therefore trying to force Elbit out of the UK.

Chalk made the submissions in Parliament, which was the first time this information entered the public domain. He was responding to shadow defence secretary John Healey, and to Labour MPs Chris Evans and Kevan Jones. Both of these latter two men are associated with the ‘Labour Friends of Israel’ group.

Release of the information served to further damaged Elbit Systems’ share prices which were already plummeting following third quarter losses. The reveal led to a fall of 10% over November 29th, with the shares down 18% through November overall.

Describing the situation in a press release, Palestine Action said:

The loss of these contracts is a huge blow for Elbit, with their attempts to gain MOD favour a major reason for their manufacturing presence in Britain. These contracts were initially awarded after Elbit’s deep involvement in procurement and training for the Israeli defence, across army, navy, and air forces. Not only are Elbit’s manufactured products described as “field-tested on Palestinians”, but their training and simulation contracts have been gained following their performances in Israel, including delivering the ‘Brigade and Battlegroup Mission Training Centre’

However, it now seems that these hundreds of millions of pounds will stop flowing from British taxpayers to the outfitters of Israel’s murderous military – amidst constant pressure of sustained and intensive direct action by Palestine Action. For over two years, Palestine Action has targeted Elbit Systems and its partners with actions that have included breaking into factories and offices, and breaching security in order to impede Elbit’s ability to securely complete its contracts across manufacturing and delivery.

Elbit’s Dreadnought Ministry of Defence (MOD) training contract was agreed on 9 May 2022, according to Palestine Action. They further note that just 6 days later, nine of their activists breached security at Elbit’s Bristol site and barricaded themselves inside the offices while causing high-level damage. Palestine Action further noted:

On another occasion, activists from Palestine Action Scotland broke into the factory of Elbit partner Thales and again dismantled what was inside – including a completed periscope which Thales specifically for the Dreadnought-class submarine. Across the over two-year campaign, the sites of Elbit Systems and its partners have been broken into over 100 times. Despite increasing its spending on surveillance, security guards, and even maintaining dogs at all sites, Elbit have been unable to address the constant threat made to its ability to securely deliver on contracts and handle sensitive material.

Palestine Action’s campaign to shut Elbit down and force them out of Britain has so far seen their Oldham factory and London offices forced to close permanently [10]. Actions taken against Elbit partners, such as Thales, APPH, JLL, have seen Elbit appear a decreasingly safe consortium member, while they simultaneously struggle to recruit for British posts – potentially as a result of the strong reputational harm done.

Reporting on the failure to prosecute Palestine Action activists, the Canary wrote in October:

The trial of the ‘Bristol 3’ is one of a long list of cases against anti-Elbit campaigners where the state has failed to secure a conviction for similar reasons. The common thread throughout these cases has been that Elbit has not provided evidence to prove that what it does is lawful

In 2015, a case against nine protesters collapsed after defence lawyers asked for the disclosure of arms export licenses. Neither Elbit nor the UK government supplied them, and the court ruled the case shouldn’t go forward.

Since then, Elbit, the CPS, and the campaigners have been at a stalemate. An onslaught of direct action against Elbit has closed down two of the company’s premises in the UK. But the state has failed to successfully prosecute people for actions at Elbit sites (although one person was convicted for an action against Elbit’s landlord in March).