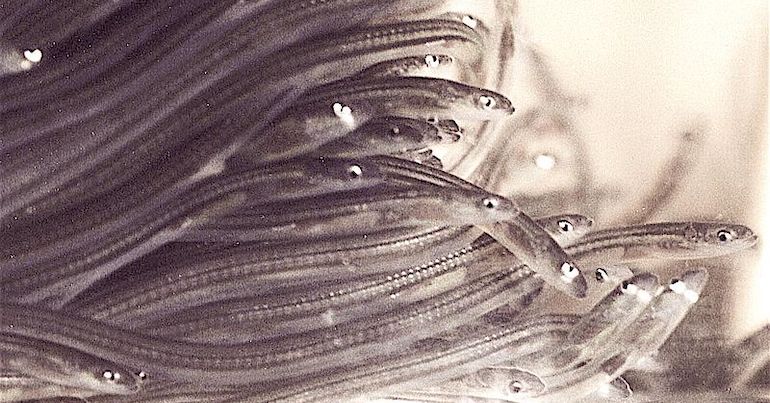 An intergovernmental scientific organisation has advised that fisheries catch no European eel in 2023. The snake-like fish is critically endangered, with estimates suggesting the juvenile population has crashed by between 95% and 99% since 1980. So, the International Council for the Exploration of the Sea (ICES) is adamant: no fishing, at any stage in its life, anywhere that it’s found.

Many European countries currently fish the species, including the UK. No doubt, representatives from these same countries will be found talking about the importance of biodiversity in Montreal, Canada, soon. The UN biodiversity conference is taking place there 7-19 December.

ICES’ advice on the European eel challenges the relevant countries to put their money where their mouth is. Whether they’ll rise to the challenge remains to be seen. So far, all signs suggest that many of them will come up short.

The European eel is fascinating. They spawn in the Sargasso Sea, near the Caribbean. Their eggs become larvae that drift with the Gulf Stream, bringing them towards Africa and Europe. As they move, they transform, from larvae into tiny, transparent glass eels, then into their larger yellow eel and silver eel selves. If they make it through the various potentially fatal hazards in their path – such as fishers, dams, and pesticide-laden waters – they ultimately end up back at their spawning grounds. Like the rest of the Earth’s biodiversity, they play an important role in ecosystems, recycling nutrients by feasting on dead animals, and being a source of food for some mammals and birds.

However, the European eel is in big trouble, with minuscule amounts of the juveniles now arriving in Europe compared to past levels. Their predicament is due to several human-led threats, including infrastructure blocking their migration, climate change, and unsustainable exploitation – including the trafficking of the species. Given exploitation’s role in the eel’s plight, the Convention on International Trade in Endangered Species of Wild Fauna and Flora (CITES) regulates international trade in the species to a certain extent.

ICES’ recent scientific guidance essentially indicates that, at this point, any fishing exploitation of the European eel, whether it’s commercial or recreational, is unsustainable. It’s not the first time the organisation has drawn this conclusion either. ICES advised the same for 2022.

New proposals from the EU

Nonetheless, fishing for the eel currently happens across much of its range, according to nonprofit the Fisheries Secretariat (FishSec). There are only a few full-scale bans on catching the species, such as in Ireland, Slovenia, and Norway. Indeed, eel producers in the UK and EU condemned ICES’ advice for zero catches in 2022, and welcomed the fact that it passed by largely unheeded.

The European Commission (EC) revealed new proposals for further restrictions on European eel fishing for its member states on 28 October, ahead of ICES’ latest advice. In a nutshell, the Commission proposed that no eel fishing should take place for six months each year in marine and coastal waters, such as estuaries and coastal lagoons. This is an effective extension of an existing three-month-long closed season. Additionally, the Commission proposed that the closed season should cover the peak migration time for glass eels and silver eels. In other words, eels travelling in certain stages of their lives would get some relief from fishing pressure in some places under the plan.

FishSec described the proposals, which will be tabled and decided at a Fisheries Council meeting in December, as a “good step in the right direction”. However, in line with ICES’ guidance, it insisted that it’s time for the fishing to stop. It also pointed out that fishers often target eels in inland waters. Therefore, the EC’s new proposals won’t apply to them.

Tumbleweeds from the UK

Fisheries are mostly a devolved matter in the UK. Scotland doesn’t allow the commercial fishing of eels, for example. The Environment Agency (EA) manages eel fisheries in England, where a number of commercial glass eel fishers operate.

The Canary asked the Department of Environment, Food and Rural Affairs, which sponsors the EA, whether it intends to heed ICES’ advice for 2023. It did not respond by the time of publication.

As a past member of the EU, the UK has eel management plans (EMPs) in place, otherwise known as eel management units (EMUs). The EU adopted an eel recovery regulation in 2007 that spurred the creation of such plans, and post-Brexit the UK has transposed the requirement into law. These EMPs can introduce several measures aimed at safeguarding eels, such as net limitations and closed seasons.

However, according to a report by ICES which it published in May, these EMUs have made no overall progress in reaching their objective. Their aim is ultimately to ensure that European eels recover. Progress is measured by estimating the level of eels that escape a country’s waters to continue their migration.

As we’ve already seen, eel producers didn’t take kindly to ICES advice for a ban in 2022. They effectively argued that the status quo – namely the EMUs – can work, if fully implemented. Industry groups have urged pretty much the same in response to the EC’s new proposals. Undoubtedly, the eel management plans have seen involved parties, including fishers, put effort into improving the European eel’s conservation status. But ICES is clear: the fishing of this critically endangered species “is not considered sustainable” as despite management efforts, its status “remains critical”.

Amid an extinction crisis, EU member states and the UK need to err on the side of caution when it comes to species exploitation and protection. This precautionary approach is what ICES’ advice is based on. As the EC has noted in its own preamble to COP15, the catastrophic loss of species which is currently happening is putting our life support systems at risk. A recent statement from the UK’s nature agencies made a similar point. The EC warned:

Right now, we’re destroying nature faster than ever. If we don’t change track, all of humanity will be put at risk.

ICES’ call for a ban on eel fishing offers the EU and the UK a chance to change tack, if they are willing to step up.