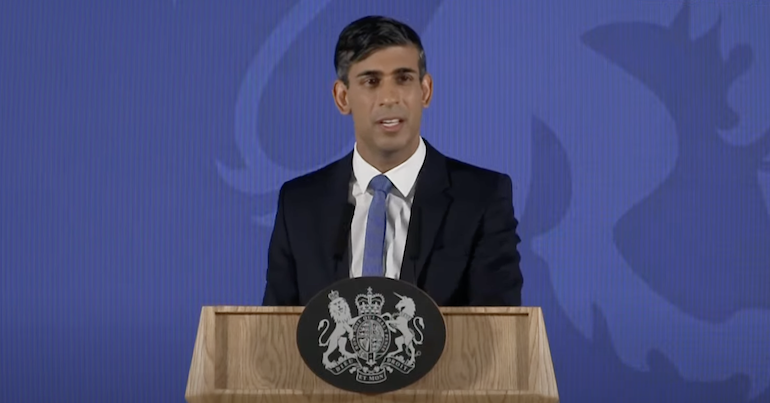 The UK’s average temperature exceeded 10C last year for the first time since records began. According to the Met Office, without human-made climate change this would be a once-in-500 years event. However, amid the climate crisis, which is primarily due to the burning of fossil fuels, a 10C average could happen every three or four years.

Despite 2022’s extreme weather, which informed this record-breaking average, and the impacts of the climate crisis now being apparent around the world, Rishi Sunak failed to mention the environment in his speech about the UK’s future on 4 January:

Not a single mention of climate or nature in Rishi Sunak's speech.

The climate crisis is one of the biggest threats our society faces – how can the PM fail to mention it?

The Met Office confirmed on 5 January that 2022 was the country’s hottest year on record. The average temperature for the year was 10.03 degrees Celsius. The Met Office’s climate attribution scientist Nikos Christidis said its studies show that without steeper cuts to carbon emissions, by the end of the century:

Since records began in 1884, the 10 warmest years have occurred from 2003 onwards, the meteorological service said, confirming trends reported elsewhere in Europe this winter.

The UK’s trajectory towards record-breaking temperature averages becoming the norm sits in a wider context. Overall, the Earth has warmed more than 1.1 degrees Celsius since the late 19th century, with roughly half of that increase occurring in the past 30 years, the World Meteorological Organization said in a report in November.

This seemingly incremental warming – along with less-than-headline-grabbing average temperatures – has huge real-life impacts. The UK is a case in point. Its 10C average temperature for 2022 doesn’t sound dramatic. But behind that figure were intense wildfires and unprecedented heat extremes during the year.

Extreme weather is becoming increasingly common the world over. 2022 saw catastrophic floods in Pakistan and the continuation of record-shattering, years-long droughts in some countries in Africa, among other events. Global warming makes such extreme weather more likely, and oftentimes more severe.

Already, the planet is proving unliveable for many people and other animals. The UK saw record excess deaths in the over-65s in 2022 due to the temperature extremes. Pakistan’s floods led to thousands of people dying or being injured. In Ethiopia, Kenya, and Somalia, the number of children at risk of severe hunger and thirst, along with disease, doubled to over 20 million between July and December 2022. The climate crisis-fuelled drought is a leading factor in their plight.

We must do more

Meanwhile, a report from the National Trust indicated that 2022’s weather extremes were devastating for wildlife in the UK. With their homes razed by wildfires and habitats lacking water, many species struggled to survive.

Africa’s drought is proving deadly for wildlife there, too. As Inside Climate News reported in December, in some cases it’s the lack of vegetation, not water, that’s causing casualties. The publication highlighted that a national park in Kenya has transformed from a “wildlife paradise” to a “wasteland” thanks to the drought, with thousands of animals dying in 2022.

Climate crisis-fuelled extreme weather is one of many threats that the rapidly-diminishing wild world faces. Nearly all of these threats are human-led, such as habitat loss and direct exploitation. All combined, these have caused an extinction – or biodiversity – crisis. A UN report in 2019 warned that one million species are at risk of extinction.

Moreover, as the National Trust’s climate crisis adviser Keith Jones has highlighted, extreme weather is likely to go from “bad to worse” unless things change. Referring to its impact on UK wildlife in 2022, he warned:

It is a stark illustration of the sort of difficulties many of our species will face if we don’t do more to mitigate rising temperatures and help nature’s survival.

Giving nature, including humans, the best chance of survival requires radical action to cut emissions and protect biodiversity. But, as Edie reported, Sunak failed to even mention the environment in a speech where he laid out the “foundations on which to build a better future”. His government is also facing legal action on multiple fronts for pushing forward with plans that threaten the environment further.

Needless to say, it’s unlikely the UK will be leading the pack when it comes to providing the concerted action the climate and biodiversity crises demand.