Over 30,000 objection letters send a clear message that this goldmine isn’t wanted - The Canary 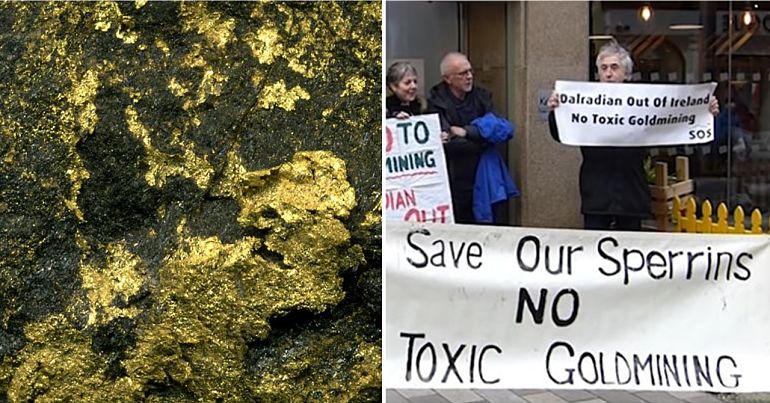 CORRECTION: This article was updated at 2.00pm on 6 February. The original featured image depicted a former mining site that didn’t directly relate to the story. Additional responses from Dalradian have also been included in the article.

The campaign to protect the Sperrin mountains in County Tyrone from the “toxic” and “outrageous threat” of a proposed goldmine is gaining support. Because as of 27 January, the Department for Infrastructure had received over 30,000 objection letters to this mine.

Campaigners claim that roughly 20,000 of these objections have come since the beginning of 2019. Dalradian Gold Ltd applied for planning permission on 27 November 2017 to mine in this Area of Outstanding Natural Beauty (AONB).

Locals are concerned about the health and environmental impacts such a mine would have on their community. These concerns are based on the experience of communities around the world that have endured pollution brought by mining.

In autumn 2019, Sperrin campaigners launched a new objection campaign to the proposed goldmine. This followed a revised application by Dalradian for a waste management plan, advertised on 10 October.

These threats came one month after anti-goldmine campaigner Emmet McAleer was elected to the local council in the May 2019 local elections. Then, on 13 August, Dalradian announced it no longer proposed using cyanide in the gold mining process. The use and local storage of cyanide has been another cause of major concern for local people.

On 5 November, campaigner Fidelma O’Kane was successful in the Belfast High Court. O’Kane took a judicial review against the Northern Ireland Environment Agency (NIEA) for a discharge consent it granted to Dalradian. This consent allowed the company to discharge nine heavy metals into the local Owenkillew river. Dalradian told The Canary:

The metals reflected in the discharge consent are all naturally occurring in watercourses in this part of Tyrone and reflect local geology. Water discharge consents are not permits to discharge harmful substances into the environment; their purpose is to ensure that discharges reflect natural levels of water quality.

In response to the number of objection letters to the mine, a Dalradian spokesperson told The Canary:

Dalradian’s proposal for an underground gold and silver mine in West Tyrone has received over 4,000 letters of support.  This is an unprecedented number for any planning project in Northern Ireland.

Last year we made a number of environmental enhancements to our proposed processes including removing cyanide and reducing water demand by 30%. Over 80% of the objections to the planning application predate these changes.

Dalradian also said 1,600 people had “visited our existing site and engaged with us on all aspects of the proposals and a further 2,000 have expressed an interest in working at the mine.”

The spokesperson described the project as “environmentally responsible” and “Europe’s first carbon neutral mine”, claiming that “modern mining… can take place in tandem with the environment” and would provide “long-term local jobs”.

At the time of writing, the number of objection letters stood at 30,276. One campaigner told The Canary he believed the surge in objections comes from the public’s awareness of the damage the mine could do. He also feels optimistic that there’ll be more objections, adding:

with this volume of letters, you don’t know where it’ll stop

During the three-year absence of Stormont (parliament in the north of Ireland) it was difficult to make a decision on planning permission. Following Stormont’s return, campaigners have vowed to intensify their campaign against the mine in the coming months.