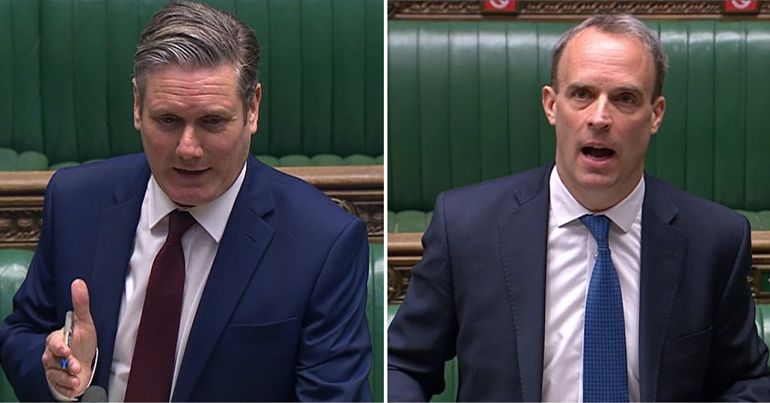 The Government was accused of being slow to respond to the coronavirus crisis as Dominic Raab faced questions on testing and protection for NHS and care workers in his Prime Minister’s Questions clash with Keir Starmer.

The new Labour leader and foreign secretary Raab – deputising for Boris Johnson as the prime minister continued his recovery from Covid-19 – faced each other in a sparsely attended House of Commons as the majority of MPs participated remotely.

Starmer questioned the government’s progress towards its target of carrying out 100,000 tests a day by the end of the month and claimed that opportunities to acquire personal protective equipment (PPE) from British firms had been missed.

He said: “There is a pattern emerging here. We were slow into lockdown, slow on testing, slow on protective equipment and now slow to take up these offers from British firms.”

Raab told him that the government was guided by scientific advisers.

He said that if Starmer “thinks he knows better than they do, with the benefit of hindsight, then that’s his decision”.

Raab said 8,000 British businesses had responded to a call for assistance on PPE and they had all received a response, with some 3,000 followed up where it was “sensible” if they had equipment with the required specification and volume.

He said it was an “incredibly difficult and competitive international environment” to source PPE from overseas.

On testing, the latest figures showed that less than half of the available capacity was being used and fewer than 20,000 tests had been carried out in a 24-hour period.

Starmer questioned how the government would ramp that up to 100,000 tests a day in just eight days’ time – particularly as some care workers and NHS staff could only be tested if they could drive to a site.

Ministers have repeatedly insisted the target will be met and Raab said “those tests will be crucial not just in terms of controlling the virus but allowing the country to move to the next phase”.

He said mobile labs were now being used, with the Army also helping to get tests to where they were needed.

– An RAF plane landed at Brize Norton from Turkey in the early hours of Wednesday, after being sent to collect a shipment of PPE – including badly-needed surgical gowns.

– The government continued to face questions about its participation in EU schemes to secure vital equipment, with Brussels saying there had been “ample opportunity” for the UK to join in.

– Professor Robin Shattock from Imperial College’s Department of Infectious Disease, said a coronavirus vaccine may be available for front-line workers and the most vulnerable by late winter

– Cancer Research UK warned that more than 2,200 new cancer cases could be going undetected each week as fewer people go to see their GP and also due to practitioners’ reluctance to send patients to hospital due to the risk of Covid-19 infection.

Labour said 36 companies had approached the party to claim that offers of help to supply PPE had been ignored.