UK must ‘stop demonising people and consider its own role’ in the refugee crisis, campaigners say - Canary 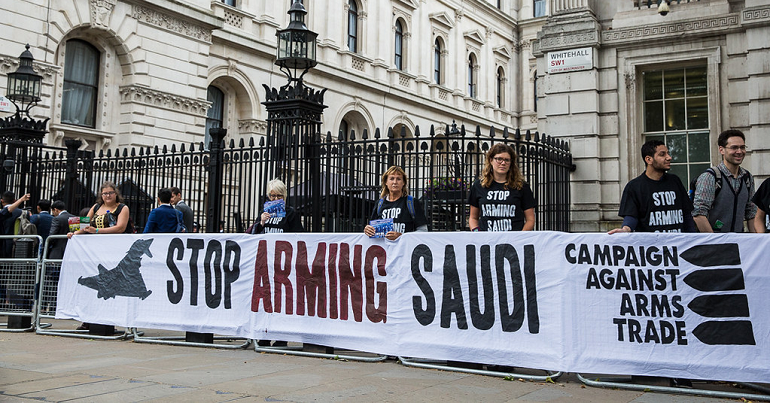 The UK must stop “demonising” refugees and consider its own role in creating the circumstances they are escaping from, campaigners say.

Many refugees have risked their lives to reach the UK this year by crossing the English Channel in everything from kayaks to a paddling pool.

The list of countries they hail from is diverse, but many have left nations wracked by conflicts the UK has played a part in.

Meanwhile, a small number of migrants have been seen coming from Yemen. It is suffering the worst humanitarian crisis in the world. A Saudi-led assault on the country started in 2015. According to the Campaign Against Arms Trade (CAAT), the UK government “has licensed £5.3 billion worth of arms to the Saudi regime” since the assault began.

UK-built and licensed Typhoon and Tornado warplanes have been used in combat missions by Saudi Arabia in Yemen.

In response to the government’s announcement, CAAT’s Andrew Smith said:

The evidence shows a clear pattern of heinous and appalling breaches of International humanitarian law by a coalition which has repeatedly targeted civilian gatherings such as weddings, funerals, and market places. The government claims that these are isolated incidents, but how many hundreds of isolated incidents would it take for the Government to stop supplying the weaponry?

The Home Office has not provided numbers of how many people from Yemen have crossed to the UK by boat in 2020.

However, analysis by the PA news agency of the available data reveals that at least 23 of the boats intercepted by Border Force have contained one or more people who said they were Yemeni nationals.

SNP MP Alison Thewliss, who is a member of All-Party Parliamentary Group for Yemen, told PA the government has a responsibility to refugees and criticised its response to small boats crossings.

I think it has been really difficult for people to get out of Yemen really, given the circumstances it has been in.

Historically the numbers of Yemenis that have made it here has been quite a low number.

Thewliss called on the government to establish safe and legal routes for people wishing to claim asylum in the UK.

Commenting on the UK’s sale of arms to Saudi Arabia, she said:

We are selling arms to one party in a conflict, we really have to step up and take more responsibility than (we) normally would.

Saudi Arabia cannot be trusted to use the arms that we sell them responsibly. We should not be selling to them, it’s as simple as that.

On the wider small boats issue, Thewliss said the idea of sending the Navy in to deal with people in rubber dinghies is “outrageous” and said the government was using it as a distraction from the coronavirus (Covid-19) pandemic.

In February PA revealed how a Saudi Arabian cargo ship feared to be carrying weapons for the Yemen conflict made a “cloak-and-dagger” stop at a UK dock under cover of darkness.

The humanitarian crisis in Yemen is the worst in the world.

It is a crisis that has been exacerbated and fuelled by UK-made arms and the UK government’s support for the brutal Saudi-led bombardment.

Many of the people crossing the Channel have left terrible circumstances.

They are people that deserve empathy and solidarity, not the kind of scaremongering and scapegoating that we have seen from Boris Johnson and his colleagues.

Governments like the UK must stop demonising refugees and consider their own roles in creating the circumstances that people are escaping from.