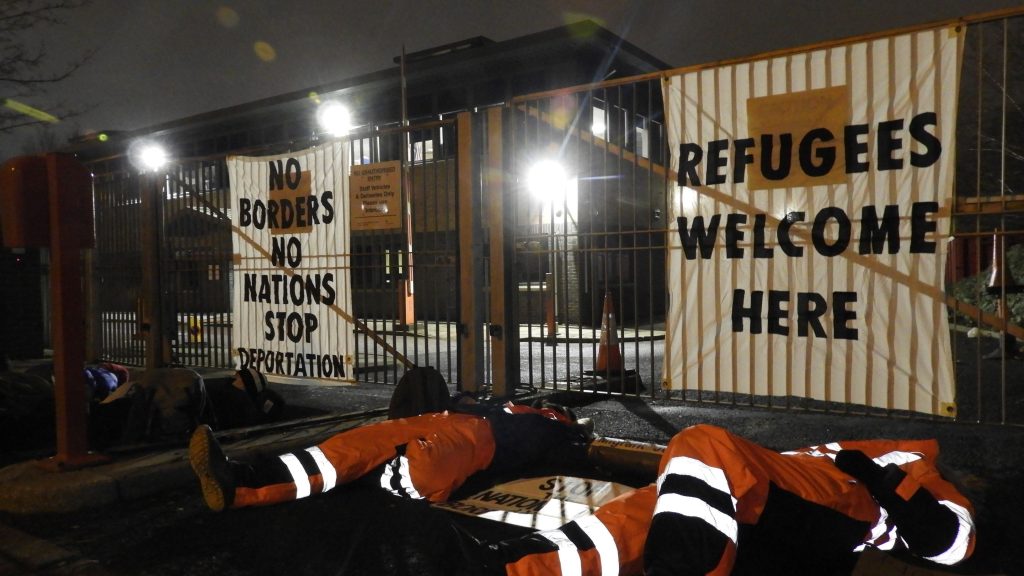 An Extinction Rebellion (XR) protest has blocked the front entrance to the Home Office building in Glasgow.

The activists locked themselves to each other and to the property’s gates from about 7am on Monday.

The protesters, from XR Scotland and XR Glasgow, are calling on the UK government “to end its hostile environment policy towards migrants​​​”.

They said the demonstration has been organised in response to home secretary Priti Patel’s Nationality and Borders Bill passing through the House Of Commons.

The bill came after 27 people lost their lives trying to cross the English Channel in November – a journey that has resulted in 166 people being recorded as either dead or missing since 2014.

Patel’s bill – which cleared the Commons last week – seeks to curb these crossings and also change how asylum claims are processed.

A spokesperson for XR Scotland said:

The Nationality and Borders Bill must be stopped

It’s state-sanctioned murder to grant immunity to border force staff if refugees die after being pushed back into French waters.

The demonstration comes after several organisations rallied together in a mass protest against the bill on Sunday in London outside 10 Downing Street.

A retired social worker who took part in the protest said:

The world’s richest 10% are responsible for half of global emissions compared with the poorest half emitting only 10%, yet it will be the communities least responsible that are forced to flee their homes on a scale never seen before as the climate crisis escalates.

The hostile environment must end, there can be no climate justice without migrant justice.

Scotland and Wales against the bill

Ministers in Scotland and Wales jointly condemned measures in the UK government’s Nationality and Borders Bill as “barbaric” last week – as well as warning the legislation may need approval from the parliaments in Edinburgh and Cardiff.

The letter outlined that the Scottish and Welsh governments have “far-reaching concerns about the impact of the provisions” in the bill.

Rather than help matters, these measures will delay rescues and endanger lives.