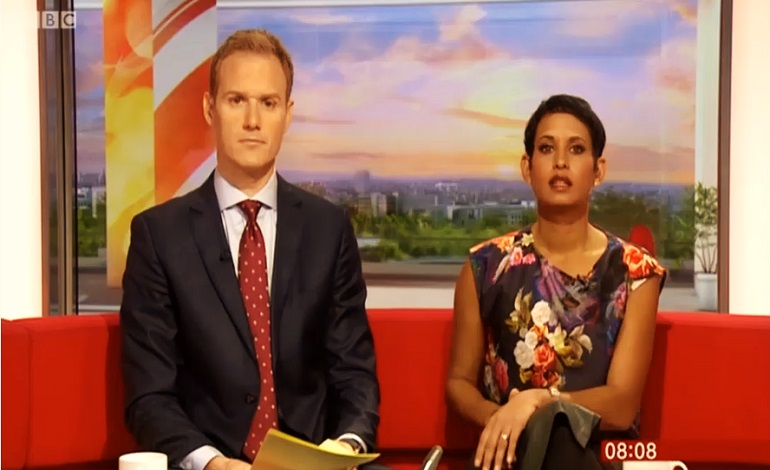 On Wednesday 11 October, an item on BBC Breakfast managed to whitewash the scale of the childhood obesity crisis that is currently engulfing the UK.

BBC Breakfast only made a passing mention of analysis from Imperial College London (ICL), published in The Lancet, which shows childhood obesity levels increasing worldwide. The segment noted that one in 10 children in the UK are now obese:

The data from ICL appears to show that childhood obesity is “plateauing” in the UK. But this masks the true reality of the situation. And it’s one where levels of obesity among the poorest children are spiralling out of control.

Childhood obesity: an issue of class?

Analysis from Public Health England (PHE) shows that childhood obesity is directly linked to poverty. Because rates of it in the most deprived socioeconomic group are more than double that of the least: 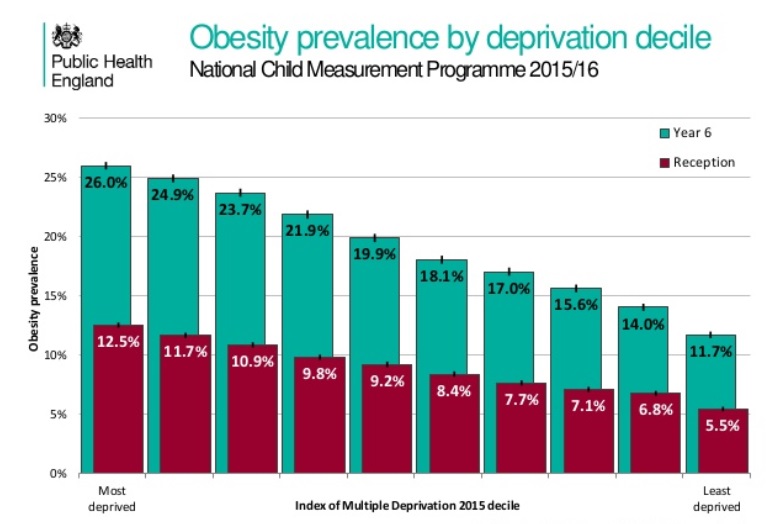 Exactly the same pattern occurs when looking at household income: 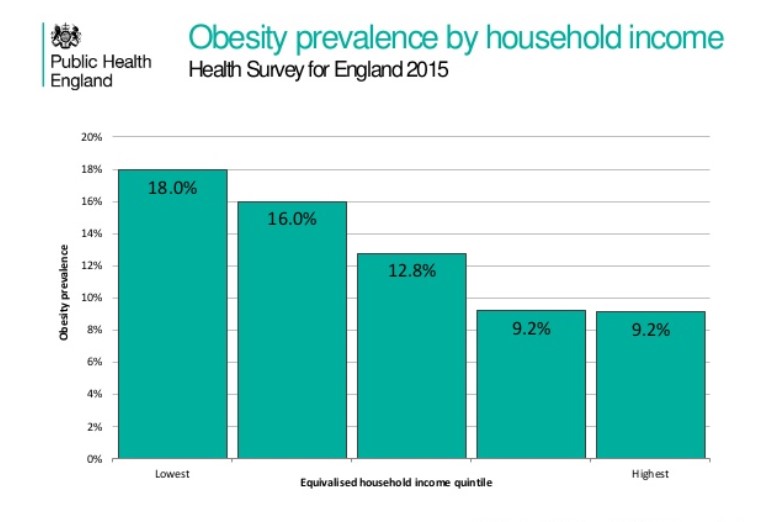 But looking deeper into the analysis, a worrying trend emerges over the last decade. Because, while childhood obesity rates have fallen among the richest children, they have rocketed among the poorest.

For example, while ‘reception’ age childhood obesity in the least deprived group has fallen by nearly 2% since 2006 [ppt, slide 19], it has increased by nearly 1% in the poorest: 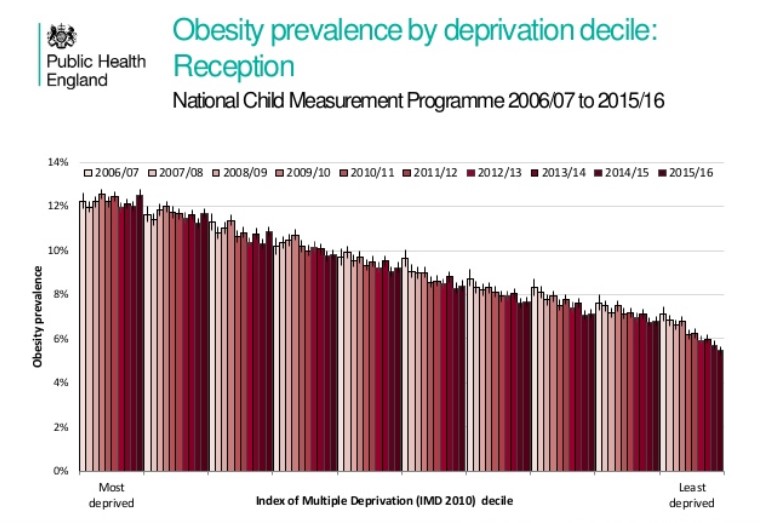 And this pattern is even more marked in 10-11 year-old children. Because childhood obesity has increased by around 5% in the most deprived group in the past decade [ppt, slide 20]. But the figure has flatlined in the least deprived: 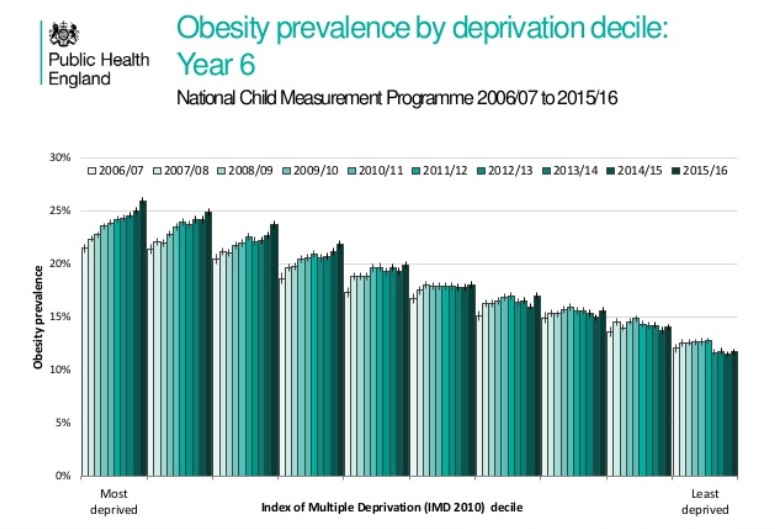 So, it is the marked fall in the richest children’s obesity levels which led the Lancet study to show a plateau effect in the figures: 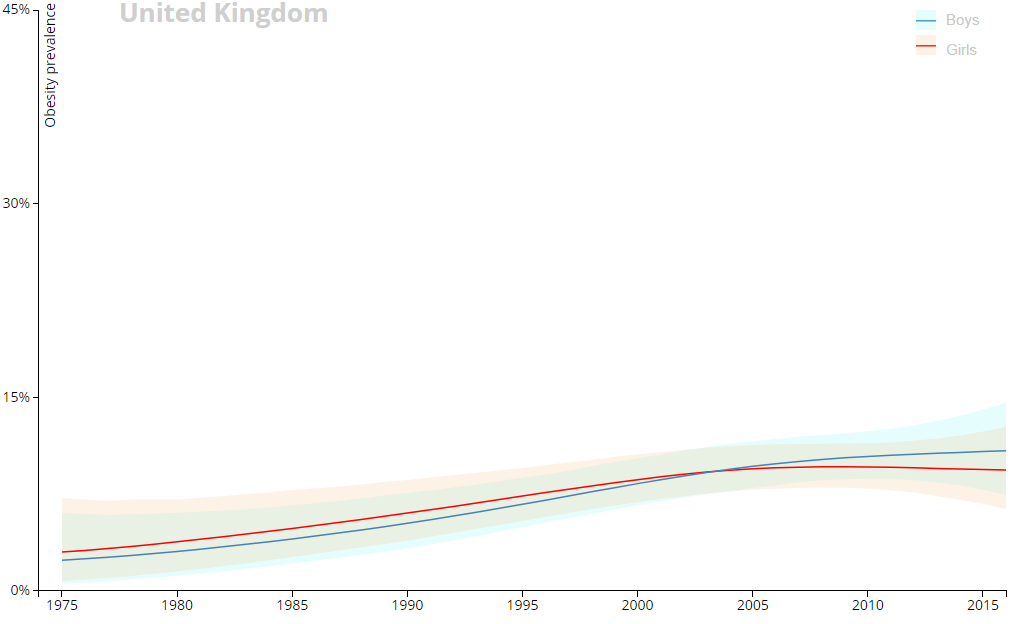 But the obvious class divide in childhood obesity is replicated in nearly every other public health crisis.

The same pattern can be seen in adult obesity [pdf, p11]: 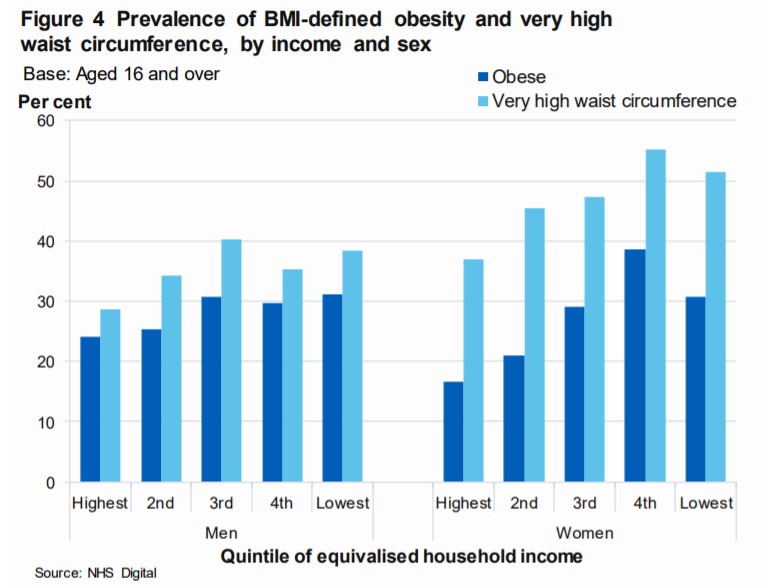 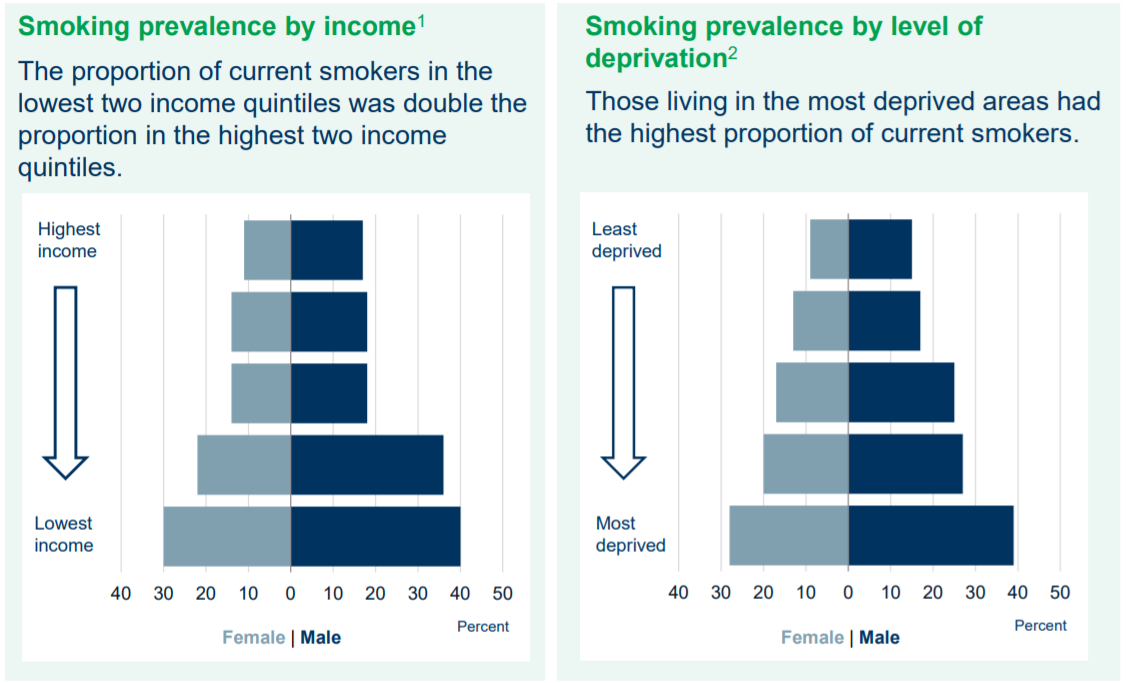 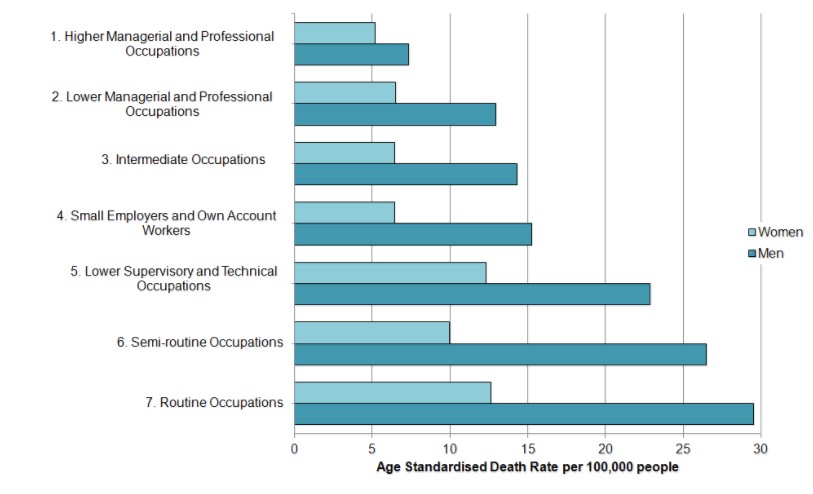 As with every public health emergency, the issue of childhood obesity is not one of ‘sugar taxes’, the state acting as a ‘nanny’, or regulation; it is one of classism and rampant inequality across all areas of life.

George Orwell said in The Road To Wigan Pier:

The ordinary human being would sooner starve than live on brown bread and raw carrots… When you are unemployed, which is to say when you are underfed, harassed, bored, and miserable, you don’t want to eat dull wholesome food. You want something a little bit ‘tasty’. There is always some cheaply pleasant thing to tempt you.

Ethnographer Lisa McKenzie discusses poverty and its effects at length in her book Getting By. In it, she argues that, “through the inequalities that thrive in British society”, living in a deprived area is made even harder. And she notes in Getting By:

Failures by government and civil society are driving the childhood obesity crisis. And the lack of meaningful action over inequality in health, wealth, education, housing and access to all manner of other services is making things worse. But with poverty forecast to increase, no amount of ‘initiatives’ will resolve this public health emergency. The very fabric of modern society will need to change.