Police have forcibly removed a great-grandmother who was serving tea. To them. - Canary Workers’ Co-op 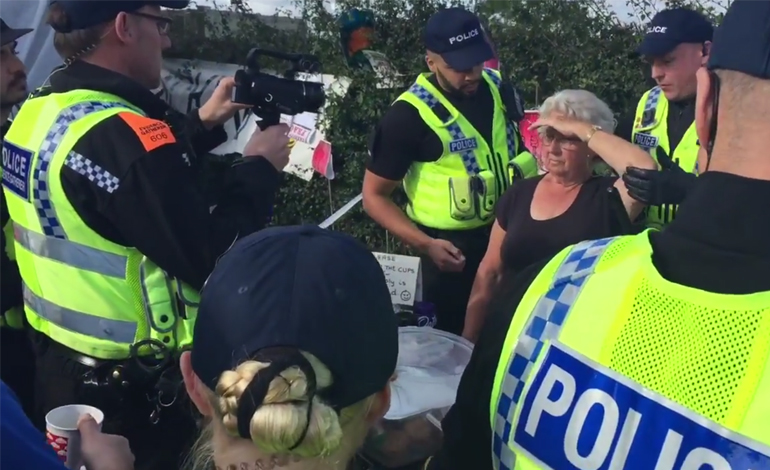 North Yorkshire police officers have forcibly removed a great-grandmother serving tea and coffee. The police say they moved Jackie Brooks and a number of other anti-fracking protesters “for their own safety”. But tea-serving Brooks claims the coppers used “bullying tactics”.

Brooks has been serving refreshments to both protesters and police from the same location at Habton Road, Kirby Misperton, since September. Habton Road is the site of protests against hydraulic fracturing (fracking) at KM8, a well soon to be used for exploration by fracking company Third Energy. But police moved the refreshments table, run by Brooks and her husband Jim, because of a nearby tower.

On 8 October, activists erected a ten-foot stack of pallets next to the gates of KM8 following allegations that police have prevented protesters from filming. The tower has been occupied by Eddie Thornton, who said:

It is essential for our safety and legal protection that we are able to film the police unhindered. The UK law is very clear that citizens have the right to film and photograph police officers, and we have repeatedly [asked] that that right is respected.

‘Step away from the picnic table’

But on 9 October, what Brooks described as “a police mountain rescue team from South Yorkshire” arrived to remove Thornton and dismantle the tower. And to aid this operation, North Yorkshire Police ordered Brooks to “step away from the picnic table” as protesters chanted “shame”.

But after Brooks refused to move, police moved her table and equipment instead.

Officers had to move several people away from a tower of pallets this morning, after we received advice from the local authority that it may not be safe. … We will always act to protect people from harm.

But Brooks says she believes the act is “just another way of pushing us around”.

And on the morning of 9 October, a lorry delivered the first part of KM8’s drilling rig.

And towers have been a major feature of anti-fracking protests at Preston New Road, Lancashire, where they have also been regularly dismantled.

Police in both North Yorkshire and Lancashire have claimed these towers pose a danger to the public. But protesters say the ‘safety concerns’ are a cover for the police’s “bullying tactics”. These worries come in the shadow of long-running [pdf] allegations of police violence against anti-fracking protesters. It’s almost as if safety concerns are just an excuse.

UPDATE: This article was amended at 1:22pm to clarify the description of the “police mountain rescue team from South Yorkshire”.