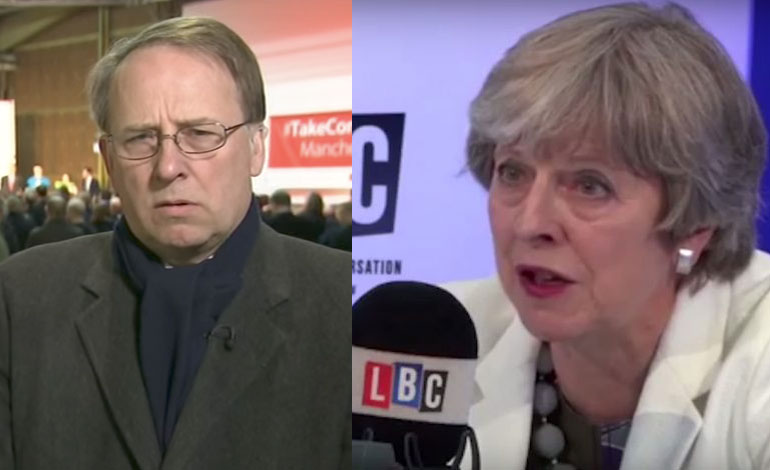 LBC’s Iain Dale interviewed Theresa May on 10 October. And one question in particular has hit the headlines. Dale asked [30.30]:

If there was a Brexit vote now, would you vote Brexit? Because you voted remain in the referendum. Have you changed your mind?

Theresa May has just told Iain Dale she won’t “answer hypothetical questions”, but then warns what would happen if Jeremy Corbyn became PM

Dale continued to press her for a clear answer, but May either dodged the question or offered up ambiguities and soundbites. Then the Prime Minister added [31.40]:

Iain… I could sit here and I could say ‘Oh, I’d still vote remain’ or ‘I’d vote leave’ just to give you an answer to that question. I’m being open and honest with you. What I did last time round was I looked at everything and came to a judgement. And I’d do exactly the same this time round.

But if she has looked at everything this time round, then she must have also made a judgement. May claims to be “open and honest”, yet she won’t tell us how she would vote if there was a second EU referendum.

It's on the front page of almost all the newspapers – this is the clip from Theresa May's LBC interview that is making the headlines. pic.twitter.com/DvJbe9yS8F

Theresa May’s unclear answer to this crucial question echoes her unclear Brexit strategy. The government should be busy making plans for the British economy after we leave the EU. But as The Financial Times reports [paywall]:

There was no sign of such a vision in Prime Minister Theresa May’s speech to the Conservative party conference earlier this month, and there is no expectation of one in chancellor Philip Hammond’s budget in November.

Tory heavyweight Lord Heseltine called the Prime Minister “weak” for failing to sack Boris Johnson, after the Foreign Minister laid out his own Brexit plan in an article for The Sun. May fought back against these accusations. But as Crick exposes, this recent LBC interview provides still more evidence of her weak position on Brexit.