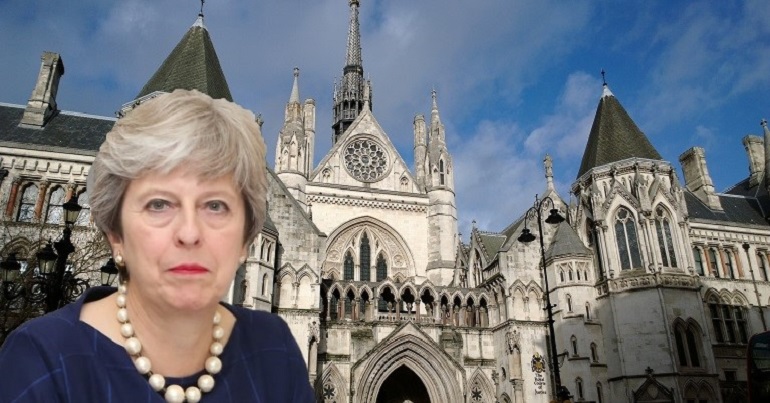 A campaign group and a politician are bringing two separate legal challenges against the government over its fracking policy.

a process to extract oil or gas from shale rock. To get the gas and oil out, the rock has to be fractured – this is known as hydraulic fracturing or ‘fracking’ for short. A mixture of water, sand and chemicals is pumped down the well at very high pressure. This fractures the rock and when the pressure is released, the gas or oil flows back up the well.

But the fracking industry is controversial. Campaigners are against it; not least because of its contribution to greenhouse gas emissions. It has also been linked to polluted drinking water and earthquakes. Studies have also shown links to low birth weights, premature births, and a possible increased risk of breast cancer.

Despite all this, on 24 July the government released its revised National Policy Planning Framework (NPPF) which includes updates on fracking. One particular section related to fracking states that authorities should:

As DrillOrDrop reported, the guidance effectively relaxed the rules around fracking; something campaigners described as the government showing “contempt for people and our planet”.

So now, a campaign group and a mayor are both bringing separate legal actions against the government.

The first is from Talk Fracking, a campaign group led by fashion designer Vivienne Westwood and her son Joe Corré. On 8 August, it issued the secretary of state for housing, communities and local government – James Brokenshire – with a pre-action legal letter. In a statement for The Canary, Talk Fracking claims that the NPPF guidance breaches the law; specifically, that it shows failures to:

In a statement for The Canary, Corré said:

Fracking companies are in no way guaranteeing energy security from their activities – in fact the UK’s biggest fracker, INEOS, uses fracked gas imported from America to produced more and more disposable plastic. That’s the same plan for fracked gas from the UK.

[The government’s] statement has also been proven totally wrong in terms of its claims about fracking’s role in a low-carbon economy, a requirement in terms of our obligations to the Climate Change Act 2008.

Fracking is in fact worse than coal in terms of emissions.

The government has until 21 August to respond to Talk Fracking’s letter. If it doesn’t respond, or its response is inadequate, Talk Fracking will commence legal proceedings.

Then, on 13 August, the mayor of North Yorkshire town Malton, Paul Andrews, announced his own legal bid against the government. It relates to a written statement made in May by secretary of state for business, energy and industrial strategy Greg Clark. The statement, effectively a preliminary policy announcement prior to July’s NPPF, instructs local authorities not to set:

Again, as per the NPPF, Clark’s statement essentially gives the green light for more fracking. But Andrews has hit back, launching a crowdfunded judicial review of Clark’s and the government’s position. In a statement for The Canary, he said:

[It] was issued unilaterally without public consultation at the whim of the government and its friends in the oil and gas industry, and has no democratic legitimacy whatsoever. It was also issued in such haste that Secretary of State failed to carry out a Strategic Environmental Assessment on the proposals, as required by law…

A spokesperson for the Ministry of Housing, Communities and Local Government told The Canary:

No one benefits from delays in planning decisions and we are committed to planning reforms to ensure quicker decision making on shale applications.

We will make sure the strongest environmental safeguards remain in place. Any proposed permitted development right would not apply to exploration in sensitive areas, including National Parks and Areas of Outstanding Natural Beauty.

As The Canary has documented, there are ongoing protests in the UK against fracking. At one site in North Yorkshire, campaigners have been prosecuted. At another, campaigners and local councillors have accused police and private security at the site of “disproportionate force” and trying to “provoke violence” – something both groups deny. Police at one point “dragged” Green Party co-leader Jonathan Bartley away from the site.

But none of this has deterred the government. So it may now rest in the hands of the legal system to stop the burgeoning fracking industry. With these two court cases looming, it may be a long and politically hot summer for the government.

– Support Andrews’ crowdfunder and find out more about Talk Fracking.