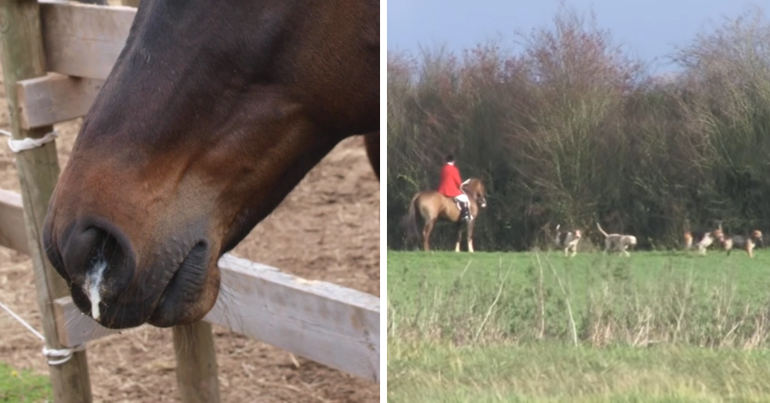 Horse racing events over the weekend of 9 and 10 February were cancelled due to an outbreak of equine influenza (EI). Fears of spreading the disease led to the “biggest shutdown” of horse racing since foot and mouth in 2001. Despite this, some hunts were still determined to ride out.

“It may be sensible not to hunt this weekend”

On 6 February, reports came out that three horses at a racing stable in Cheshire had tested positive for EI. As a result, the British Horseracing Authority cancelled all of its races. The body described EI as a “highly contagious” disease that can be “airborne over reasonable distances”. It can also be spread by contact, including through humans. Although not lethal, EI can cause “high fever, coughing and nasal discharge”.

Two days later, the Hunting Office, which oversees packs across the UK, issued advice that discouraged hunts from riding out. It said that it wasn’t advising a “blanket ban”, but:

This advice was aimed at both mounted and foot packs. The Hunting Office noted that EI has previously infected hounds in the UK.

According to the Animal Health Trust, there were two outbreaks of EI amongst foxhounds between 2002 and 2003. The trust said transportation in the same lorry as infected horses was the “likely” cause. However, a study of the September 2002 case also suggested hounds may have caught the disease by eating infected horsemeat.

Many hunts chose to stay home in light of the news. But some remained determined to hunt.

Still out and about

Anti-hunting groups across England spotted hunts riding on 8 and 9 February. These include the Fitzwilliam Hunt, Fernie Hunt, Ledbury Hunt, North Shropshire Hunt, and the Weston and Banwell Harriers. And, despite the Hunting Office stating its advice extended to foot packs, at least one beagle pack was seen out.

But it was the Blackmore and Sparkford Vale (BSV) hunt that particularly outraged anti-hunting campaigners. On 9 February, Weymouth Animal Rights reported that the BSV was out in north Dorset. During this time the hunt allegedly killed a fox. As Hounds Off pointed out, EI was reported on 8 February at Millfield School, which has its own stables. This school is just over 20 miles from where BSV hunted the next day. As a result of the outbreak, SomersetLive said that “all equine businesses” in the county were locked down.

Joe Hashman of Hounds Off said the decision of the BSV to hunt on 9 February was revealing:

The fact that they have chosen to carry on hunting demonstrates how prepared they are to put horses at risk rather than lose a day’s play.”

Three more cases of EI were reported at the original stables in Cheshire. And on 11 February, four further cases were reported at a racing stables in Newmarket. The impact of these latest outbreaks, which bring the total since the start of 2019 to six, was described by racing trainer James Tate as a “blow” to the horse racing industry.

Clearly, though, some hunts haven’t let their possible spreading of an epidemic prevent them from continuing to strike fear into the heart of wildlife. That shouldn’t come as a surprise. Hunts have paid little regard to their activities spreading bovine TB. The Kimblewick Hunt even went out of its way to cover up its guilt.

Many hunts made the right decision to err on the side of caution. But the stubborn determination of some not to pass up a day of their pastime put even their own horses and hounds at unnecessary risk. That one small choice is hugely revealing.