As swallows return to Norwich, the game may be up for the 'sickening practice' of netting - Canary 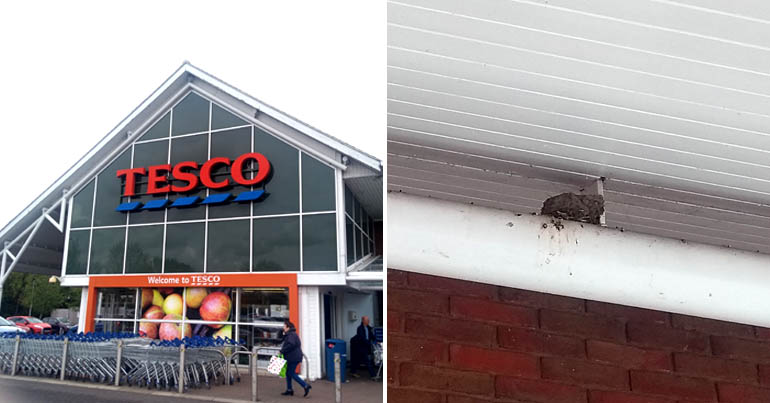 Swallows have returned to a Tesco in Norwich, Norfolk after the store removed netting from its rafters. The Harford Bridge supermarket received a huge amount of criticism after installing the material to stop swallows from nesting. The store said at the time that “health and safety concerns” over bird droppings on trolleys led to the move. Furthermore, it had cleared space at the back of the building for the birds. But experts pointed out that migratory birds including swallows will only nest in the exact same spot.

Tesco took the netting down on 16 March, describing it at the time as a ‘temporary’ measure. But on 28 April, the BBC reported that the store won’t put the nets back up. And, as a result, the first swallow nests have now been spotted in the rafters of the store. A local farmer and conservationist, Chris Skinner, credited social media for the victory.

However, it appears the wider Tesco network has been slower to reconsider netting. On 24 April, Stewart Abbot, who has helped lead the campaign against the practice, shared a photo he claimed showed a dead pigeon. He said the bird had become caught in netting at a Tesco store in Welling, London. And that came just a couple of weeks after a Tesco in Diss, Norfolk, said its netting was solely to “keep pigeons out of the roof”.

Birds have also returned to nest in cliffs on the Norfolk coast.

North Norfolk District Council (NNDC) faced huge online backlash after Twitter user Bea posted a video on 8 April of a net stopping a sand martin from reaching its burrow. NNDC said that nearly a mile of netting had been put up for the safety of the birds during a large coastal engineering project. But experts again pointed out that the birds would return only to the same spot. As a result, the nets were in danger of wiping out a generation of sand martins.

The council quickly agreed to remove some of the nets and by 16 April had removed them from the upper section of the cliffs. Nets remained on the lower section because the council said burrows there would be “at risk of being blocked in”. Since then, Bea has posted photos and videos of sand martins nesting in the cliffs at Bacton:

Lots of #SaveTheBactonSandMartins action today despite the brisk wind off the #NorthSea Counted over 60 birds today. I reported a loose section of netting to contractor so hopefully it will be secured today. #NetsDownForNature ⁦@NetsNot⁩ ⁦@RSPBintheEast⁩ pic.twitter.com/owcQ3hADTD

The issue exploded after people started sharing images of hedges and trees covered by netting. Although it has been “common practice” for several years, public awareness reached critical mass in February after photos of netted hedges in Winterton, Lincolnshire, went viral on social media. Subsequently, a petition to make netting illegal gained nearly 350,000 votes.

The government provided an initial response on 10 April. It said:

Developers must fulfil their obligation to safeguard local wildlife and habitats. Netting trees and hedgerows is only appropriate where genuinely needed to protect birds from harm during development.

And, because the petition crossed the 100,000 threshold, the government will debate it on 13 May.

While a parliamentary debate guarantees very little, it’s a testament to the strength of a small but committed campaign. And although it remains an issue across the country, the “sickening practice” of netting is now on the back foot.