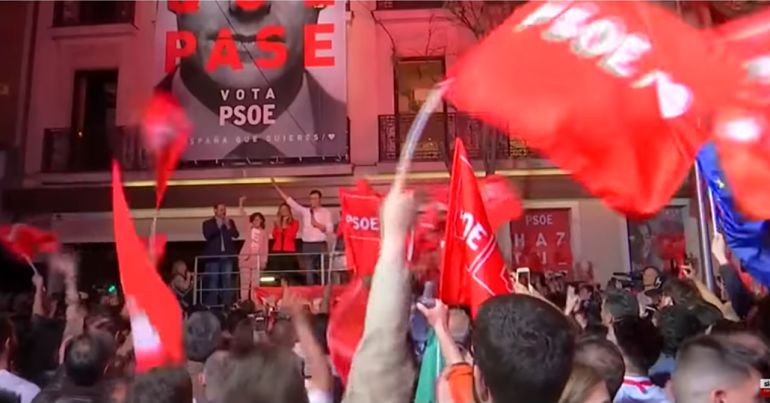 On 28 April, Spain’s governing Socialist Workers’ Party (PSOE) won the country’s snap general election with 123 of 350 seats and roughly 30% of the vote. This share of the vote, however, is short of a majority. Latest reports suggest that the PSOE might attempt to govern Spain with minority rule, forming voting coalitions on a case-by-case basis. However, it’s still possible that it may form a majority coalition combining national and regional parties.

A win against authoritarianism

Spain’s PSOE campaigned on a platform of economic justice, as well as support for a Green New Deal. After the election victory, PSOE leader Pedro Sánchez told crowds that his party’s win sends “a message to the world that it’s possible to win against regression and authoritarianism”. There are, nonetheless, major question marks hovering over Sánchez’s foreign policy.

Some takeaways from Spain's election:

1) Under pressure from Podemos, Spain's Socialists (PSOE) shifted to the left. PSOE's leader, Pedro Sanchez, who was sympathetic to a pact with Podemos, was previously overthrown in a PSOE rightwing coup in 2016: his strategy won back votes.

Labour MP Clive Lewis claimed that the election suggests that the choice is now “socialism or barbarism”:

Spanish election: socialists win amid far-right gains>Its socialism or barbarism folks. The Spanish people have spoken, so has Greece and Portugal. But it’s close. We must stay in the fight, transform the EU and help lead the charge against the far-right https://t.co/hKIiJ04kVX

Despite the fact that more than half of all voters voted for left-wing parties, some news outlets have focused principally on the rise of Spain’s far-right Vox party. Many were disappointed with the weighting of the BBC‘s coverage of the elections:

BBC main TV news
– opens on Vox winning seats
– then correspondent says we can't say far right is the story, as they came 5th.
– then a report mainly about Vox, Franco & bull-fighting
– brief passing mention of the result being left winning "leaving many alienated & resentful"

Why does Uk media struggle so much with proportional representation? BBC radio report saying Spain’s socialists won ‘despite many voters voting against them’. Huh? And don’t remember Labour or Conservatives elections victories as ‘X win despite most Britons voting against them’

It gives me absolutely no pleasure to bash the BBC but I thought its Spanish election headlines and coverage was lamentable. Shoehorning the result into a 'rise of the far right' narrative, leading with that regardless, never mind an actual swing to the left.

The BBC inability to report Spain properly is really frustrating.

In fact, the collapse of Spain’s mainstream right is perhaps the most shocking element of this election. The right-wing Popular Party (PP) lost a no-confidence vote in May 2018, and has now recorded its worst election results in history. Its seat share is down to 66 from 137 just three years ago.

This infographic shows how drastically the PP’s (blue) support has collapsed:

not only to quash the secessionist challenge in Catalonia but also to recentralize Spain by removing the power of its regional governments.

On 25 April, Open Democracy revealed that a Donald Trump-linked organisation was “working behind the scenes to drive Europe’s voters to the far right”. The organisation, CitizenGo, is reportedly pumping “dark money” into far-right campaigns across Europe, including Vox, and is known for online petitions:

against same-sex marriage, sex education and abortion – and for driving buses across cities with slogans against LGBT rights and “feminazis”.

Meanwhile, Spain’s animal rights party Pacma, which formed as a campaign against bullfighting, gained its largest ever tally of votes.

And in Catalonia, the Republican Left of Catalonia (ERC) party topped the regional vote with 15 seats. The PSOE may call on the ERC to form a majority government, in which case the Catalan republicans will try to force the Spanish government to give official blessing to an independence referendum. The issue of Catalonian independence has dogged Spanish politics for decades, though the crisis came to a head in 2017 when Catalonia unilaterally declared independence from Spain.

Many on the left will be hoping that PSOE aligns with Spain’s progressive parties, rather than make concessions to Spain’s largely deflated centre-right.