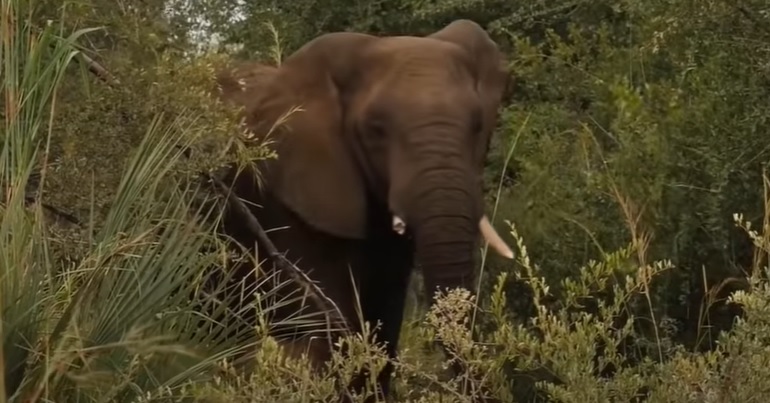 Canadian company ReconAfrica is currently digging for oil in Namibia, with further exploration in Botswana moving forward too. Ultimately, the company aims “to develop an area roughly the size of Belgium into an oil field”, according to activists against the exploration.

One promotional article branded the project potentially “The Most Exciting Oil Play Of The Decade”. ReconAfrica paid the company behind that article $70,000 to “write and disseminate” it, according to a disclaimer. It’s quickly, however, becoming one of the most controversial and contested ‘oil plays’ too.

The huge project is taking place in wilderness areas that provide vital resources, particularly water, and a home to thousands of people and many iconic and at risk wild animals. National Geographic has described it as the “last stronghold” for elephants because it’s a sanctuary for the largest remaining herd of endangered African savannah elephants.

The project is also happening amid a growing consensus – even in the typically fossil fuel-friendly International Energy Agency – that no-one should be exploring for new sources of fossil fuels. It is, after all, largely fossil fuels that have caused the climate crisis. Plus, the world already has more known reserves of fossil fuels than it can use if we want to avoid absolute environmental catastrophe.

Challenges to ReconAfrica’s plans are, however, coming thick and fast, with protests and actions taking place in multiple countries on the eve of World Environment Day on 5 June, including in Namibia. Resistance to the project isn’t restricted to protests though, it is happening on multiple fronts.

Unauthorised use of land

As the Kavango Alive “information hub” outlined in a press release, farmer Andreas Sinonge is suing ReconAfrica’s Namibian branch over alleged unauthorised use of his family’s land. The Legal Assistance Centre (LAC) filed the lawsuit at Namibia’s high court on 19 April on Sinonge’s behalf.

As outlined in the affidavit, Sinonge is a member of the Shambyu Traditional Community who resides in Mbambi village in the Kavango East region of Namibia. He claims that he and his family have tenure over an area of communal land that ReconAfrica is already carrying out works on. ReconAfrica has asserted that the Shambyu Traditional Authority approved its use of the land. In March, the Namibian Sun reported on conflict of interest concerns about that authority in relation to ReconAfrica. But Sinonge says he and his family weren’t consulted and they didn’t give permission for use of the land.

In February, a group of San leaders embarked on a protest walk stretching over 300 miles to Namibia’s diplomatic mission in Cape Town, South Africa. The San are indigenous peoples of southern Africa and the affected area is part of the homeland of San tribes. The petition they handed in also alleged a lack of consultation. It read:

ReconAfrica has held some public consultations, but critics say they’ve been limited, involved complicated presentations, and lacked meaningful opportunities for engagement with affected communities. A ReconAfrica spokesperson told Mongabay, however, that consultations have “been a success with a largely positive response”, according to the outlet.

Following the initiation of the High Court case, news emerged that ReconAfrica had applied for land rights in two areas in Kavango East – one of which was Mbambi. Notification of these applications appeared in the Namibian media on 14 May, along with a seven-day window during which people could object to the proposed five-year-long occupation of the lands for fossil fuel exploration.

On 18 May, the LAC sent a letter to the Kavango East Communal Land Board “to officially file the family’s objections”, according to the Namibian. In the letter, the LAC referenced the court case and accused ReconAfrica of seeking to “legitimise its unlawful occupation”. It also argued that:

In the circumstances where there is already a dispute pending in the High Court, the faulty application also constitutes a denial of the legal processes due to our client.

LAC urged the board to “evict the applicant, Recon, from the land”.

“A house of cards”

Meanwhile, ReconAfrica is the subject of a complaint to the U.S. Securities and Exchange Commission (SEC). According to National Geographic, a whistleblower submitted a 44-page long complaint to the SEC on 5 May. The outlet said the complaint alleges that “to drive up its stock price, ReconAfrica has violated securities laws by failing to disclose crucial information about its plans to look for oil and gas deposits” in the region.

National Geographic noted that the company has sponsored content about the potential of any oil discovery, such as the aforementioned article and another that claimed the southern African project “could be worth billions”. The company also produced a press release on 15 April stating that its first test well shows “clear evidence of a working conventional petroleum system”.

A petroleum geologist who spoke to National Geographic argued that ReconAfrica would need “more information from seismic analysis of the geology and multiple test wells” to make such a “bold claim”, the outlet reported. Currently the company has not yet completed a seismic survey and has only drilled that one test well, although it has begun work on a second well. Oil industry expert Stephen MacSearraigh said that:

They are aggressively pumping the stock price, but if the resource they’re strongly hinting at isn’t actually there, or isn’t of the magnitude they’re suggesting, this is a house of cards.

ReconAfrica told National Geographic that verification of the evidence of oil at the test well was done by two third-party companies. A third company did an “initial analysis” of the well’s data, it said. In a published response to the outlet’s article, the company also asserted that “anyone can file a complaint with the SEC” and, as such, the filings should currently be considered “unproven allegations”.

In addition to the anonymous SEC complaint from the whistleblower, the securities class action law firm Schall Law announced on 24 May that it was investigating claims against ReconAfrica “on behalf of investors”. It cited a previous article by National Geographic that reported ReconAfrica didn’t appear to have the necessary water-related permits in place, which the outlet said suggested “that the company is operating in breach of Namibian government regulations”. ReconAfrica claims that it “adheres fully to the legal obligations within all territories in which it operates”. The article also alleged that, according to comments from members of the public, ReconAfrica was “ignoring local concerns about the impact of exploration and drilling on water supplies, homes, and animals”. The company’s spokesperson said it has had “detailed consultation[s] with local communities and other stakeholders”.

The Canary contacted ReconAfrica for comment. It directed us to statements it made in the aforementioned published response to National Geographic‘s article. In particular, it highlighted the following claim:

Canadian practices and technologies, especially as they pertain to resource exploration and development and ESG practices, are widely regarded as among the best in the world for environmental protection and safety, and we are bringing those innovations to every aspect of our project.

Canada is home to the oil sands industry, which National Geographic has previously described as “the world’s most destructive oil operation” due to its severe environmental impact. ReconAfrica also highlighted this assertion:

ReconAfrica’s work in Namibia is guided by – and under the constant review and approval of – representatives of a wide range of government Ministries and regulatory agencies including: the Ministry of Mines & Energy (MME), the Ministry of Agriculture, Water & Land Reform (MAWLR), the Ministry of Environment, Forestry & Tourism (MEFT), the Ministry of Home Affairs, Immigration, Safety & Security, and others.

However, Namibia’s Minister of Agriculture, Water and Land Reform Calle Schlettwein confirmed on 26 May that his ministry had not yet granted water permits to the company. As the Globe and Mail reported, the company claims it has secured the “necessary consent” from the relevant traditional authorities.

In its reponse to The Canary, ReconAfrica also directed us to a statement by the governor of East Kavango Bonifasius Wakudumo, which read:

We are pleased with ReconAfrica’s approach to working closely and in constant consultation with our office, the traditional leadership, local authority and the community.

National Geographic noted that the water supplies that could be affected by the fossil fuel project include “part of vital watershed of the Okavango Delta“, which the company’s license area overlaps with. As Sky News explained in March:

these waters are a lifeblood for tens of thousands of people, countless wild animals, and a huge amount of vegetation. It is a lifeline to a desert delta, and if anything should happen to these waters it will have a catastrophic impact on multiple countries.

There are grave concerns over the potential impact of ReconAfrica’s operations on the Delta and its connected waterways. The fossil fuel industry requires lots of water and is notorious for polluting water systems. In its response to National Geographic‘s article, ReconAfrica said its “current operations are more than 50km south of the Okavango River and 260km west of the Okavango Delta”. Its ‘current operations’ are, however, miniscule in comparison to the scale of operations it hopes to develop if the project goes fully ahead. The company has leased an area for drilling of more than 35,000 square kilometres and aims to drill hundreds of wells. Furthermore, its current operations are close to the Omatako river, which “feeds into” the Okavango Delta.

“An arena of death”

ReconAfrica says it believes the project can happen in a “an environmentally and socially responsible manner” and deliver “much-needed economic and social benefits” to Namibia. But as the director of Nigeria’s Health of Mother Earth Foundation (HOMEF) Nnimmo Bassey recently wrote:

When the first commercially viable oil well spurted in 1956 in Nigeria’s Niger Delta, there were wild celebrations of progress arriving in the area

After more than six decades of hydrocarbons exploitation in the Niger Delta, the region now ranks as one of the top ten most polluted places on earth. Water bodies, soils, and the air have all been stoked full of harmful pollutants, and life expectancy now stands at a dreary 41 years.

Bassey asserted that “exploitation of petroleum resources has routinely been accompanied by extreme ecological harms”. But, in terms of ReconAfrica’s project, he argued that it’s “not too late to pull the plug” on a “gamble” that risks turning the Okavango region “into an arena of death”.