These junior doctors have crowdfunded over £86,000 to finally give Jeremy Hunt what he deserves [VIDEO, TWEETS] - Canary 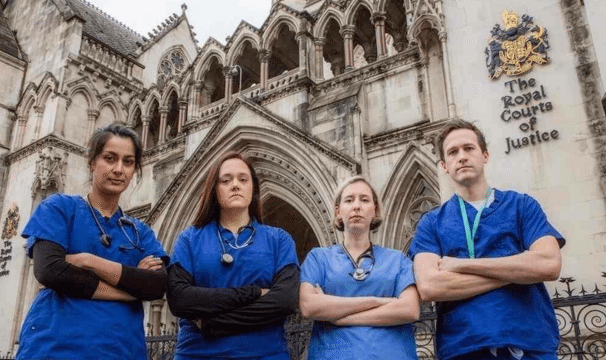 A group of junior doctors have raised over £86,000 in a bid to take Jeremy Hunt to court over his plans to force an ‘unworkable’ new contract upon them. If they are successful in raising their target of £100,000 it will be the second time in the space of a mere month that the Tory government will face the threat of legal action from its own employees.

They initially set out to raise £25,000 but smashed the target in just two days. This legal challenge comes just after the first of three 48-hour walkouts by junior doctors in protest over Hunt’s contract imposition. The group explained what drove them to taking action on their fundraising page:

We know these are only the start of widespread changes to the health service that will affect all staff working in the NHS. It is junior doctors today and other NHS staff tomorrow. We cannot stand by without a proper review of the impact on patient safety by such actions.

The only avenue left to get to the bottom of the issues surrounding the lack of planning prior to the imposition of the dangerous doctors’ contracts is to ask for the High Court to review the decision making process and decision to impose contracts.

The group has also created a video to explain why they need our help:

In late February, Doctors’ union the BMA  announced that it was  seeking a judicial review into the contract that Jeremy Hunt is forcing onto them, based on the fact that he did not carry out an Equality Impact Assessment for it. The government’s lawyers have been caught on record boasting that the BMA’s case is ‘bound to fail’.

Perhaps those gloating lawyers shouldn’t be too relaxed. An activist for the group writing anonymously for the Junior Doctor Blog has clearly laid out the grounds upon which they intend to take on Jeremy Hunt and his team:

We are challenging them over patient safety – patients who are concerned an already underfunded NHS cannot cope with the government’s insistence on ‘7-day’ services without additional funds or additional doctors. We have huge gaps in cover already – a 60% increase in rota gaps for doctors, and a 50% increase in agency nurses in a single year. 9/10 junior doctors have said they will resign if the new contract goes ahead.

What’s more, the campaign is attracting a wealth of support on Twitter:

Junior doctors have crowdfunded £50,000 in a day in order to challenge the government in the courts. https://t.co/BId3i0mo3o #JustHealth

I just supported the #JustHealth case https://t.co/03N0uieFgO. We must challenge govt. for imposing an unsafe contract & destroying morale

It’s about time we banded together to give Jeremy Hunt what he really deserves – a day in court.

Let’s force Jeremy Hunt into the legal spotlight and help him get a taste of his own medicine. This funding will enable JustHealth’s lawyers to review documents detailing years of negotiations, to conduct research into whether patient safety will be affected, and test the whether the forced contract has been fair and reasonable and the result end would be justified.

You can donate to the fund here.

Show your solidarity with junior doctors by buying a Wear Your NHS T-Shirt. All profits shall be split between The Junior Doctor Campaign and medical/ health charitable organisations.