A robot just performed major surgery all on its own. And nailed it! - Canary 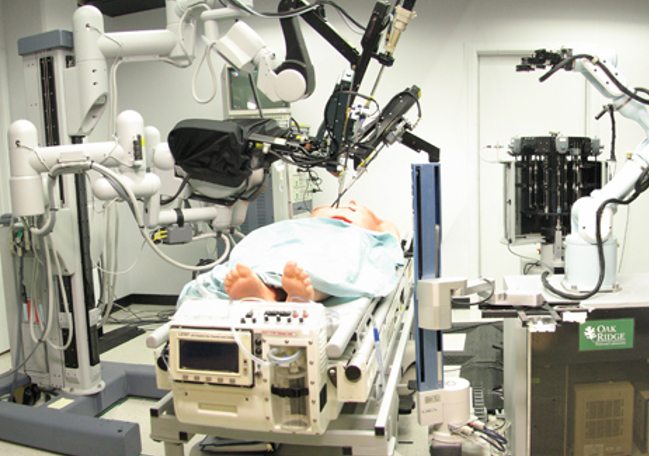 ***CONTENT WARNING: discussion of use of animals in research***

The robot surgeon depicted in Ridley Scott’s science fiction film Prometheus is one step closer to reality. A team from the USA has developed an autonomous robot surgeon that can perform intestinal surgery without guidance from a human doctor.

These advanced systems have allowed STAR to keep track of and operate on soft tissues, which have previously caused problems for robots due to their mobility and slippery nature. The study published in the journal Science Translational Medicine documents the results of surgery carried out by STAR on the small intestine tissue of pigs which had been removed from the body, and then on small intestine tissue in living pigs.

The stitching procedures undertaken by STAR were also carried out using more conventional techniques: by hand, key hole surgery and by RAS.

Confidence is high in the potential of STAR with the surgical team that developed it, they state in the published study that:

These results promise that autonomous surgery can bring better efficacy, safety, and access to the best surgical techniques regardless of human factors, including surgeon experience

Efficiency is a variable that could be improved in future iterations

In Prometheus the heroine of the film, Elizabeth Shaw, is infected with a parasitical alien which grows in her abdomen and threatens to kill her, once fully grown, by bursting out of her. To prevent this she accesses a robotic surgeon which performs a caesarian like operation to remove the pesky little alien critter, in the nick of time.

The STAR is nowhere near that level of sophistication yet and although there was no human input into its control during the surgical procedures being tested, it was under the supervision of a human surgeon during the trials.

The team at the Childrens National Medical Centre in Washington responsible for the breakthrough was led by Peter Kim, who was pleased with STAR’s performance, and told NewScientist:

The risk of a patient dying after an operation goes up by five to 10-fold if the gut leaks, so this could potentially prevent complications.

He also hopes to improve on the speed of STAR in future.

It is still early days for this autonomous robotic surgeon but a question that will have to be answered at some point in the future is: who is liable when the robot makes a mistake and seriously injures or kills someone?

Currently if a mistake is made during surgery the company owning the hospital (the NHS, in the UK) is liable unless their has been criminal negligence by the surgeon. But a robot cannot be held liable for any mistakes it makes, and although it may be autonomous, robots are currently far from sentient, so locking it up is unlikely to provide any relief for the grieving family or rehabilitation for the robot.

If autonomous machines are to flourish society has to come up with regulations to govern these new challenges. And if autonomous robotic surgeons do flourish any prospective surgeons would do well to reconsider their career prospects.