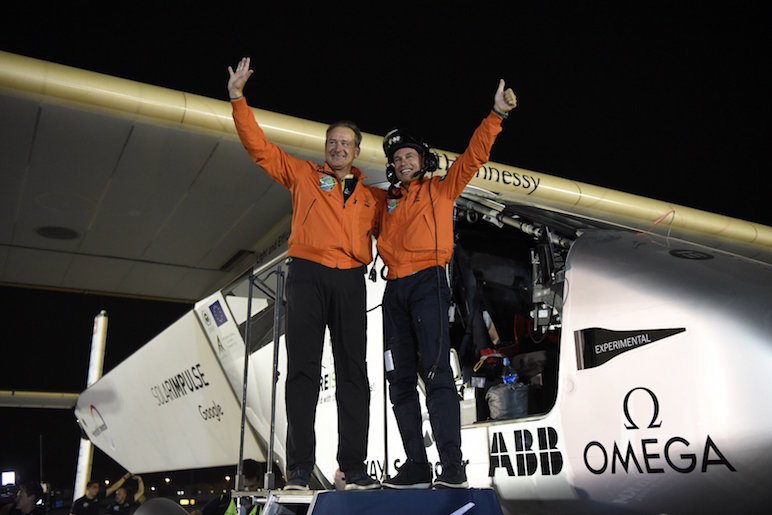 Solar Impulse 2 landed safely in Abu Dhabi on Tuesday to cheers and applause, after completing the world’s first solar-powered flight around the globe.

The plane took renewable energy to new heights on the epic adventure; as the Solar Impulse website now says:

We made it back to Abu Dhabi, 40,000km without fuel, a first for energy

The plane took off from the UAE on the 9th of March last year in an attempt to fly around the world using only energy from the sun. The project intended to emphasize the potential of clean energy.

The round-the-world feat – the first of its kind – saw Solar Impulse 2 take in four continents and cover a distance of more than 26,000 miles.

The #solar airplane has now successfully made it full circle around the world https://t.co/9DABXSg8AG pic.twitter.com/VNv3wqosht

Swiss pilots Bertrand Piccard and Andre Borschberg took turns in piloting the plane over the 17 legs of the journey, which saw a total of 21 days in the air. The longest leg – 5,545 miles from Japan to Hawaii – took almost 5 days and 5 nights, breaking the world record for the longest uninterrupted solo flight.

The adventure did not go without a hitch, though. In fact, the Solar Impulse team have had to overcome several problems over the past year and four months in order to complete the journey. Setbacks included bad weather, and a 10-month layover in Hawaii following battery damage.

Despite these problems, the pilots set 19 official aviation records during the global voyage, safely landing themselves in the history books. Piccard said to CNET:

It’s like a new era in aviation. Because it’s the beginning it’s difficult, it’s challenging, there is no benchmark

We had to invent something completely new.

Now they have completed this historic milestone, what’s next for the Solar Impulse team?

The two Swiss pilots say they will continue to leverage the expertise and technology gained over the years of the Solar Impulse project. They hope to launch new innovative projects and highlight energy efficient solutions through the creation of the International Committee for Clean Technologies.

And it won’t be too long before we see solar drones flying in the stratosphere, the team has hinted.

As Andre Borschberg has said himself, Solar Impulse is very well positioned to contribute to the next generation of unmanned solar aeroplanes. We’re excited to see what the team launches next!