Theresa May is causing uproar with this latest privatisation - Canary 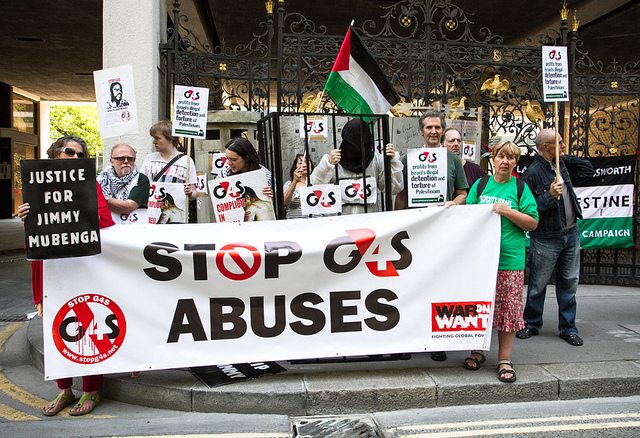 Theresa May appears to be setting the tone for her prime ministership by awarding the contract to run the government’s discrimination help and advice line to one of the most unreputable firms in the UK – G4S.

The Equality Advisory and Support Service (EASS) provides confidential support to those who have faced discrimination on the grounds of their sex, race, or disability.  It was previously run by the Equality and Human Rights Commission (EHRC), an independent statutory body. In 2011 a government review found the helpline to be failing, and in 2012 a joint project was set up between outsourcer Sitel and a group of charities.

However, a report by the House of Lords found this service was also failing. It commented that it basically was:

a phone line manned by inexperienced staff via a completely independent agent. The helpline does not provide advice … it will very explicitly steer clear of giving any sort of view on the merits of whether someone has a discrimination complaint that is valid or not, or what they should do about it, which is the bit that people really need. So it is quite ineffective.

The findings recommended that the service be given back to the EHRC and it to be run as a publicly-funded venture. However, citing the fact that the commission apparently had no interest in running it, the Department for Education under Nicky Morgan chose to offer the contract out to tender, and it was subsequently awarded to UK security firm G4S.

G4S’s track record ought to disqualify it from taking on such a sensitive contract. With hate crime and discrimination on the rise in the wake of the Brexit vote, we need good quality support services more than ever. We believe this helpline should be brought back in-house and it is deeply disturbing that the government appears to have dismissed this out of hand.

Its “track record” is indeed one that should disqualify it from running this contract; moreover, it should throw up the question of whether the company should be running any government services at all.

A history of failure

Ever since the company famously used to let prisoners escape from its vans (under its previous incarnation Group 4), G4S has been marred by failure, mismanagement, financial scandal and countless accusations of human rights abuses.

In Lincolnshire, five employees were suspended in May of this year after it was discovered they were making bogus 999 emergency calls to “hit targets” at the G4S-operated police control room. The operators were, on average, making 30-40 test calls a month in 2015 – but this suddenly rocketed to 139 in October, 236 in November and 349 in December. The figures show that without the extra test calls G4S would have missed its target of answering 92% of calls within 10 seconds.

Then there is the case of G4S using immigrants at detention centres as “cheap labour” to save the company money. It was accused of employing people awaiting deportation to do jobs such as cooking and cleaning – for as little as £1 per hour. It was estimated that G4S and three other firms had saved around £2.8m by not paying the minimum wage.

But G4S has a reputation for trying to improve their finances at any opportunity possible. Even if it means ripping off the taxpayer. There was the well-documented case of the company overcharging the government by £109m for the provision of electronic security tagging of offenders, which resulted in the company being temporarily banned from bidding for public contracts.

Scandal-hit Yarl’s Wood detention centre is another example of G4S treating immigrants as underclass citizens. At the Serco-operated facility, which has been dogged by claims of rape and sexual abuse, G4S runs the healthcare services. It has been accused of “a failure to take detainees’ complex physical and mental needs seriously” after people had to wait weeks for essential blood tests, and were also denied basic medication for conditions such as asthma and diabetes.

But the most disturbing allegations surround G4S’s treatment of children under their care.

Take, for example, the scandal surrounding Medway “Secure Training Centre” (or private children’s prison, if you prefer). After a BBC Panorama documentary exposed allegations of abuse at the facility in Rochester, Kent, 10 people have been arrested and bailed on suspicion of misconduct in public office, child neglect, and assault. The accusations range from hitting children around the head, stabbing them with forks and throttling them – all while purposefully carrying out the alleged abuse away from the eyes of CCTV.

But this is not some one-off occurrence when G4S is involved in the care of children. At its Rainsbrook facility in  Northamptonshire, 15-year-old Gareth Myatt died in 2004 from “positional asphyxia” after choking on his own vomit while being restrained by guards. The centre, near Rugby, was one of the three worst in the country, according to a 2015 government report – which exposed 65 incidents during which a child’s breathing was compromised and/or they suffered serious injury during 2014/15.

All three facilities were run by G4S, which has since lost the contracts.

Furthermore, these accounts of wrongdoing by the company are set against a backdrop of financial trickery – invariably at the expense of the taxpayer.

A pertinent example would be the financial year for 2012/13. During that period the government directly subsidised private companies over £58bn in the form of grants and tax breaks. However, during the same 12 months, the taxpayer received back just £41bn in corporation tax – meaning the public were actually left £17bn out of pocket. And G4S was one of the companies milking this for all it was worth.

A Freedom of Information (FOI) request showed that in 2012 the company had over £300m of government contracts on their books, and in the same financial year made over £175m worldwide in pretax profits. Yet, in the UK, the company paid no corporation tax. G4S said at the time this was due to the company carrying over “one-off losses” from the previous financial year.

While this is perfectly legal, it is a wholly unethical business practice. Most companies depreciate losses over a period of several years and continue to pay tax – however, by hitting their books with these costs in one year, it means G4S effectively still made a profit but paid no tax in the process.

The question has to be asked as to why the government – after so many scandals, accusations of human rights abuses and financial skullduggery – keep on awarding G4S these lucrative contracts? The answer is very simple: money.

G4S can operate services at a far cheaper rate than the government could if it funded them with public money. For example, at the police call centre in Lincolnshire, G4S proudly announced it had saved the police force £6m; or the contract the company has for housing or asylum seekers – G4S is set to make a £45m loss on this, but they’ll take the hit, as it were, because worldwide business is booming in the US and the Middle East.

Flogging off public services to companies like G4S essentially make the government’s accounts look better, while at the same time absolving it of any responsibility when things go wrong. Furthermore, when you look at the individuals who sit on the board of G4S, they are a “Who’s Who” of British companies in the marital bed of UK governments – all are former high-ranking executives at the likes of BAE, Deloitte, Centrica, BT, British American Tobacco and Ernst and Young. The current chairman, John Connolly, sits on the president’s board of the influential Confederation of British Industry (CBI) and is a former advisor to Boris Johnson.

Essentially, G4S is a microcosm of what is known as “corporatism” – where the lines between big business and big government become so blurred it’s unclear who works for who. Multinational corporations run government contracts on the cheap, in exchange for tax breaks and the turning of blind eyes. Backs are scratched so hard they’re left red-raw.

So it’s wholly unsurprising that G4S has received this latest contract. A spokesperson for the Government Equalities Office said:

The Equality Advisory and Support Service is an important source of free advice and support for people facing discrimination or human rights issues. We ran an open and competitive tender process to identify who is best to take it forward.

And then decided to let G4S run it, anyway – even though, based on its shameful, tarnished history, it’s undoubtedly not best placed to run anything human rights-related. At all.

And, if the public needed even more reasons not to trust G4S with the management of a helpline for people who have suffered discrimination – look to the US. The company is currently facing a $3.5m lawsuit, brought by four former employees. The charge? That management was complicit in the homophobic abuse it suffered while working for G4S. You really could not make this up.

Sign the petition to remove all of G4S’s prison contracts.

Keep up-to-date with War on Want’s calendar of events.

Support United Voices of the World – the trade union for low-paid migrant workers.