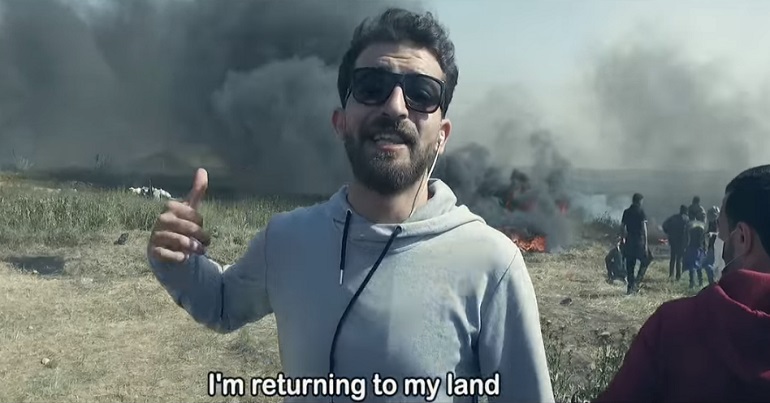 A rapper from Gaza is about to release what is possibly the album of his career. And he has launched a crowdfunding campaign to finish the work on it. But the story behind the huge project is as compelling as the ones that will be told on the album.

MC Gaza, whose real name is Ibrahim Ghunaim, is a 26-year-old rapper from the Gaza Strip. He shot to prominence when he released the track Kushuk, with its video filmed directly on the front line of the Great Return March. Now, he’s back – with a 25-track album on the way. So The Canary caught up with MC Gaza to talk Israel, rap, and what it’s like living in what he calls an “apartheid” state.

MC Gaza’s love of rap started when he was 13 years old. In 2005, he went to his first concert and was amazed by what he called “the way rap artists could freely express themselves”. This led him to start writing his own lyrics and music, which focused on life in Gaza under Israeli occupation. Then, in 2008, he took part in a hip-hop competition in Gaza; one that was shut down midway through by the security forces. But he still ended up coming first, and this gave him the confidence to write even more.

What’s telling about MC Gaza’s story is that he didn’t only have to battle the Israeli occupation but also attempts to silence rappers by Gaza’s own local government. As he wrote for Mondoweiss:

After trying to organize my first concerts by myself, it became clear that it was impossible because of the high cost and climate of fear of attending rap concerts. The possibility of being arrested by the local government in Gaza always exists. In one of my attempts to organize an event, they demanded gender segregation and to inform them of the themes of songs that I would perform. In other instances, they simply denied me permission to perform.

But MC Gaza still persevered. He says he:

produced educational songs for children on the dangers of war and conflict and I participated in many events on behalf of people with disabilities, women’s rights and Palestinian prisoners’ families.

Fast forward to this year and, after the release of Kushuk, MC Gaza started to become more prominent. He dedicated the video of the grime track to his “beloved friend and Martyr journalist” Yaser Murtaja, who was killed by Israeli forces:

The video is a stunning piece of work. Combining drone footage and traditional filming methods, MC Gaza shot the video in the midst of the protest. He told The Canary:

It was the most important video clip I have ever done in my life, because it was shot in a real location with real people next to real terrorists, who were shooting us. I think it was one of the most unique video clips going… When you talk without fear about your rights, it shows how much you love your country.

But after its release, MC Gaza felt it was time to move on.

After trying for years to forge a rap career within the confines of Gaza, he felt that his work could have more of an impact from the outside. So as he described in Mondoweiss:

I left the Gaza Strip three months ago for Tunisia after I paid a smuggler $2,800 to put my name on a list of those who are allowed to leave Gaza.

Now in Tunisia, he’s putting the finishing touches to his new album. He’s crowdfunding to cover the final production and publishing costs. With a target of $15,000, he’s beginning to pick up support.

Called Step 25, the album is – as the title implies – a collection of 25 tracks. MC Gaza told The Canary:

Step 25 is possibly the biggest Palestinian music album for years. Nobody’s done an album with 25 songs and more than 70 artists participating in it. The album is a mix of genres, but led by a rapper [MC Gaza]. It has more than 15 types of music with 25 subjects. Step 25 is all about what we are living through in Palestine; society, politics, humanity and even some fun subjects are in the album.

I made Step 25 all by myself, with my own power and three years of hard working. Nobody sponsored it. But this is why I made a fundraising campaign – so I can share it to the people of the world. I hope everyone will help and support the album.

MC Gaza has created a promotional video for Step 25, which gives a taster of what the album has to offer:

An inspiration for Gaza

His work is a shining example in a current resurgence of conscious art. From political theatre and film to photography and satire, politically and socially challenging art is experiencing a renaissance.

MC Gaza told The Canary that using art to relay what’s happening in Gaza and Palestine is important:

It’s very important to me. If Palestinians don’t use the arts to talk about our country and our rights, who will? I think the world could be better if we support each other to success; because in my country there is no one supporting music or arts. It’s because we need basics rights first. This is the other compliant people have when they ask you why you left your country. But I need to reach a dream; be bigger; make all [the] world know about what’s happening to Gaza.

MC Gaza is an inspirational artist. Full of character, insight and perseverance, he consistently does himself and his beloved country proud through his work. Now, he just needs all our help to take that final step to publishing what looks set to be a groundbreaking piece of work.

– Donate to MC Gaza’s crowdfunder and follow him on Twitter. Listen to the preview release of Step 25.