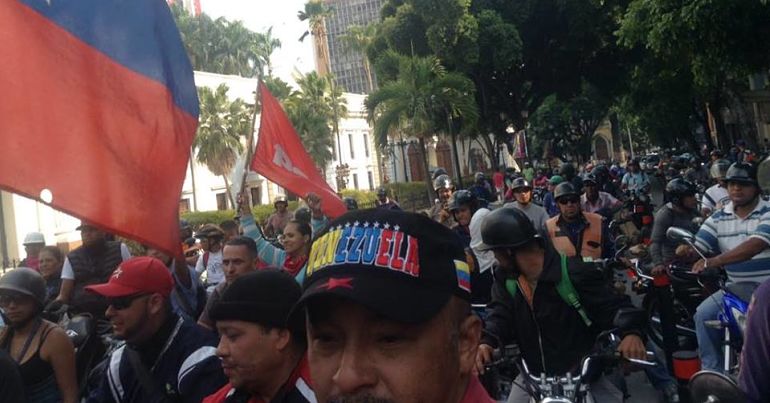 According to authorities, Venezuela suffered a “double attack” at its main hydroelectric plant on 26 March, which affected most of the country’s 23 states. The first alleged attack came on 26 March at roughly 1:30pm; the second the same evening at 9:50pm. A third and briefer blackout occurred on 27 March at 7pm. Communications minister Jorge Rodríguez claimed: “An attack of this nature against the electric system had never been seen”.

As various parts of the country remain without light, opposition figures deny sabotage and are blaming the situation on economic mismanagement.

The situation on the streets remains generally calm. The Canary walked through central Caracas on Monday night, where one of the only city lights emanated from the ever-burning torch of Venezuela’s National Pantheon. Except for some on-duty police officers, nobody was around; Caracas suffered virtually no looting throughout the former blackout beginning on 7 March. At a central hospital, a generator was buzzing and the hospital staff seemed to be dealing with the situation calmly.

On the ground, some of the blame is certainly being placed at the feet of Venezuelan president Nicolás Maduro. As lights went out on Monday night, for example, the first thing The Canary heard around the centre of Caracas, Venezuela’s capital, were shouts of “Maduro, fuck your mother”. The following day, children played in the streets, chanting “we want electricity, we want water”. A local government supporter asked “why is there no electricity?”, to which the children responded almost unanimously “Maduro!”.

Others, meanwhile, blame the US-backed opposition for sabotage. As opposition leader Juan Guaidó spoke at the Venezuelan National Assembly on 27 March, for instance, protesters on motorbikes circled the building calling the blackouts an act of opposition-sponsored terrorism.

Dealing with the blackouts…

The Canary also visited the Caracas neighbourhood of Antimano on 27 March. “We’re usually the first to lose electricity and last to get it back”, said locals, as we looked over to a neighbouring barrio where light was already returning. They also spoke about the irrelevance of political differences during blackouts, joking that, “if someone goes to the toilet and there’s no paper, we all put a hand in”.

The Canary also witnessed how local colectivos – pro-government social organisations – burst into action at times of community crisis. As lights went out on 27 March, local organisers took to the streets to fill buckets of water from passing trucks; make homemade candles with water, oil, and rope in a jam jar; and help cars access the nearby hospital. During the first major blackout in early March, an organiser told The Canary, everyone brought their perishable food items to the nearest house with a generator. “I had around 300 chickens in my fridges and freezers”, the host said.

Blackouts have a rippling, crippling effect on the country. The metro system of Caracas normally transports around two million people each day. During blackouts, it grinds to a halt and many are forced to walk home, take overcrowded replacement buses, or not leave their local area at all.

Venezuela’s economy is also considerably inflated, and few Venezuelans use cash to make daily transactions (the maximum withdrawal amount at an ATM is roughly 2,000 Bolívares – less than a dollar). During a blackout, meanwhile, card transactions are impossible. And even when the light returns, phone lines – needed to make card transactions – often remain down. “Is there service?” The Canary asked one shopkeeper on the morning of 27 March. He laughed and looked ready to close for the day at roughly 10am.

The blackouts also have a psychological effect on the population. Updates are few and far between, leaving families wondering what’s really happening. Drivers, meanwhile, form long queues on roads near antennas to find reception on their mobile phones. One worried Venezuelan told The Canary: “If you go three nights without electricity, the worst comes out in people”.

If the latest blackouts are an act of sabotage, they’re certainly effective.

The Canary was in the studio of Mazo Dando – a popular Venezuelan talk show – to hear a live call from Maduro, who accused the US-backed opposition of “terrorism” and spoke of an “electromagnetic attack”. At this point, it would seem wholly unwise to rule out sabotage, with a trail leading all the way back to Washington.

In the lead-up to the US-backed coup in Chile in 1973, the country experienced similar blackouts. Like in Venezuela, these caused serious disruption and, as US officials noted at the time, “nervousness” among the population.

Washington’s ever-increasing economic sanctions, moreover, have impacted the government’s ability to deal with blackouts. And as The Canary reported on 12 March, a leaked memo suggests that the Venezuelan opposition may be using blackouts to sow “public unrest”. The memo specifically said that the collapse of the currency would:

have the impact of galvanizing public unrest in a way that no opposition group could ever hope to generate.

The Canary has seen a message from the opposition Popular Will party, calling for renewed street action in response to the latest blackouts.

There’s a strong sense on the ground that, whatever situation is thrown at them, Venezuelans are determined to resolve it by their own means. They don’t want foreign intervention. And as the economic situation deteriorates, community solidarity remains a fundamental obstacle to US imperialism.