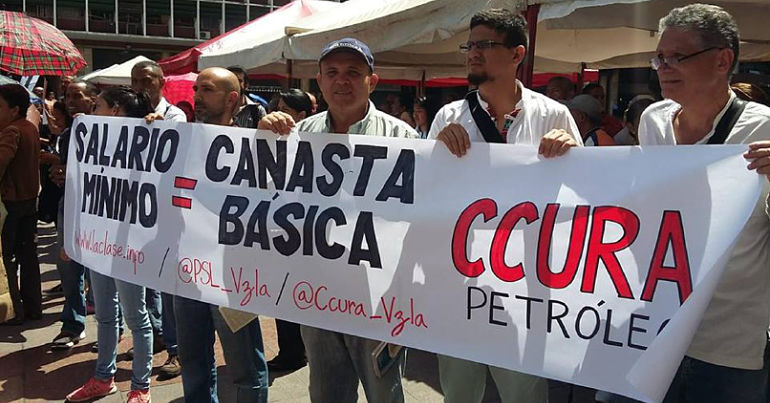 Though we often hear criticism of Venezuela’s government from the political right, we rarely hear strong critiques from the left. So The Canary sought one out for balance.

On 2 April, we met with leaders of Venezuela’s Socialism and Liberty Party (PSL), a small organisation which proposes a ‘third way’ out of Venezuela’s political situation. For them, neither US-backed opposition leader Juan Guaidó nor Venezuelan president Nicolás Maduro offer a true break from Western capitalism and imperialism.

Though the Venezuelan government is currently under imperialist attack from Washington, the PSL argues that Maduro is no anti-imperialist. PSL activist Simón Rodríguez Porras explained how Venezuela has ceded too much power to foreign oil transnationals. This, he said, undermines the country’s political and economic sovereignty:

If you look at Venezuela’s oil policy, we’ve given away massive parts of our natural wealth to foreign private capital. The Venezuelan government created in 2007 mixed enterprises in which the state participates in 60% of the oil profits, and multinationals have a 40% participation. We’ve given away a lot of our national territory to these companies, and also helped to subsidise them.

We’re also insulted that, in 2017, Venezuela provided $500,000 for [US president] Donald Trump’s inauguration [via an affiliate of the state-owned oil company]. What kind of anti-imperialist government does that?

On the streets of Caracas, meanwhile, the Venezuelan government has put up placards of Maduro meeting with Recep Tayyip Erdoğan (the war criminal president of NATO member Turkey). The Canary asked what the PSL thought about Venezuela’s choice of global allies:

Our foreign policy also isn’t anti-imperialist or socialist. It’s an extension of a capitalist and authoritarian domestic policy; therefore, it’s logical for Maduro’s civic-military dictatorship to have allies like Russia, Egypt, and Turkey.

Rodríguez elaborated on what he meant by a ‘civic-military dictatorship’, saying:

The government propaganda portrays the military as progressive. But many of the top military authorities went to the [highly controversial] School of the Americas; they graduated in psychological operations, counterinsurgency warfare, and apply the same techniques now as they did before. They have the same reactionary mindsets as in other countries like Colombia.

In 2004, Venezuela stopped sending students to the School of the Americas; but some that had trained there remain government figures. Venezuela also continues to hold democratic elections, which in 2015 saw a significant victory for the opposition.

In light of Rodríguez’s strong words, The Canary asked if the PSL had anything positive to say about Venezuela’s ‘Bolivarian revolution’:

Although Chavismo [the movement supporting former president Hugo Chávez] had massive popular support in its early years, and there were big expectations of revolutionary change, there was no fundamental change in social and economic relations. The economy not only remained capitalist; now we have semi-slavery working conditions with seven-dollar monthly wages.

It’s therefore possible to reject US imperialism while saying that Maduro isn’t progressive. It’s possible to have a third way.

Venezuela is incredibly rich in natural resources. It has the world’s largest proven oil reserves and, as many Venezuelans will tell you, is rich in gold, water, and precious minerals. These facts are indisputably tied to Washington’s continuous meddling in the country’s internal affairs.

Throughout the 2000s, Hugo Chávez used Venezuela’s natural wealth to fund socio-economic programmes of wealth re-distribution. As climate breakdown closes in, however, Venezuela’s battle to control its own oil production produces a certain contradiction. Poor people will be – and in many respects, are already being – worst affected by fossil-fuel-linked global warming. In this context, The Canary asked the PSL how the left can reconcile nationalised oil production with fighting climate change. Rodríguez said:

Venezuelan workers are the first affected by oil-related environmental issues: PDVSA’s oil spills, for instance, lead to deaths and injuries of workers.

You also have to understand that, under Chávez, our oil dependency actually increased. We became more reliant on oil – not less. We want to change that.

Our economy is overly reliant on oil. We can’t change this overnight. But in order to overcome oil dependency, the first thing we have to do is nationalise it and use the oil wealth rationally, invest in agriculture, new technologies, renewable energies, to diversify in order to create a new democratic economic model.

If the 20th century is anything to go by, oil nationalisation is often followed by Western military intervention. So The Canary asked the PSL how its preferred government – which would nationalise oil while weakening the military – might survive:

To defeat imperialism, you have to struggle. Maduro hasn’t taken any serious measures against US interests in this sense.

To many, the PSL’s political project may seem idealistic within the current context. Indeed, its leaders explained that the government accuses any left-wing criticism of Maduro as aiding the right; all while the right falsely claims Venezuela’s problem is socialism.

Rodríguez continued by explaining how he expects the PSL might achieve its objectives:

We need spontaneous mobilisation from below without waiting for any bourgeois permission – without the permission of the government. We have to demand the right to basic necessities that we’re currently lacking: water, electricity, education, food. Given Maduro’s unpopularity, there’s a possibility for mass public rebellion. This is exactly what Washington and Guaidó don’t want; this would destroy their attempts to control political change through a coup attempt. We promote a change that is authentic and from below.

Critique from the left

The PSL’s leaders are undeniably passionate. They also hold some important positions in the workers’ movement – such as the oil federation, where one of their leaders (José Bodas) is secretary general. But the party has struggled to find considerable support among Venezuelans.

In the context of an ongoing US-backed coup, this isn’t particularly surprising. Because although there’s a wide spectrum of political opinion in Venezuela, many people feel there are only two realistic options on the table: support Guaidó in the hope of escaping the economic crisis (US sanctions would immediately end if he gained power, for example) or defend Maduro to protect the integrity of the Venezuelan state and the achievements made under Chávez. This limited choice is then reported as a simplistic pro- or anti-government binary in the media.

As the PSL shows, opposing imperialism doesn’t have to mean giving full support to the governments it targets.