Democrat elites may have just handed victory to Donald Trump. Here's why - Canary 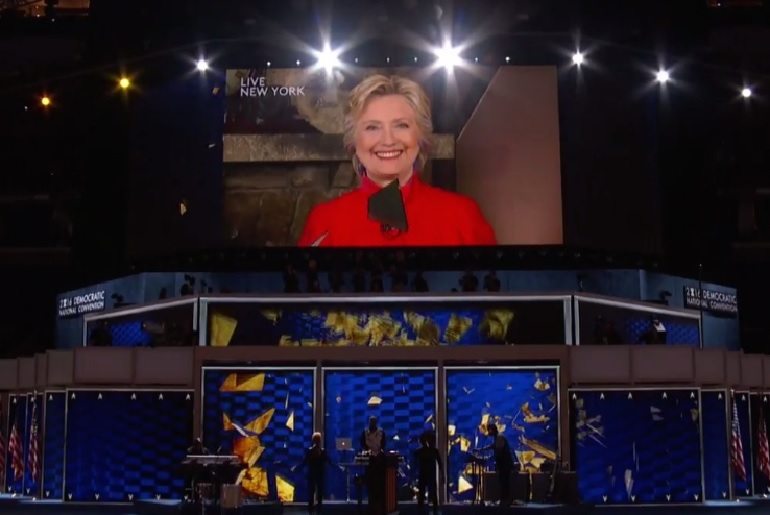 Billionaire presidential candidate Donald Trump should have been easy to defeat. But in the USA’s two-party political system, that always depended on who his Democratic opponent was. And by tipping the balance in Hillary Clinton’s favour from the very beginning of the nomination process, the Democratic party may well have handed victory to Trump.

Prof Noam Chomsky has called the USA’s political system a plutocracy (rule of the wealthy) masquerading as a democracy, namely because both Democratic and Republican parties represent right-wing policies which put corporate rights over workers’ rights. Bernie Sanders, however, gave the Democrats a very real chance of making this year’s elections into a clear choice between progress and continued degeneration.

The problem was that the Democratic establishment (and the media) was deeply committed to Clinton becoming its candidate from day one, as recently leaked emails have shown. But in spite of the very obvious bias against Sanders, voters familiar with Clinton’s policies after her many years in the limelight were excited about having a progressive alternative to the status quo.

Although Sanders’ crowdfunded campaign was a big success and he polled consistently higher than Clinton in match-ups against Donald Trump, he failed to win enough delegates to beat Clinton in the race for Democratic nominee. His prominent role in the contest, however, gave him the leverage to force concessions from the party’s platform – which now promises to expand access to health care and eliminate college tuition for working families, among other progressive policies.

But it wasn’t only concessions that factored into Sanders’ eventual endorsement of Clinton. He also stressed that a Trump presidential victory would be “a devastating blow to all that we are fighting for”, and that he would continue to fight for change by supporting “like-minded candidates at the federal, state and local levels who are committed to accomplishing our goals”.

On the eve of the Democratic national convention, a 1,000-strong march passed through Philadelphia led by a banner reading “Help End Establishment Politics, Vote No on Hillary”. The protesters were Sanders supporters. Another event insisted that Sanders’ policies were needed immediately, and not just at some point in the distant future.

Inside the convention, Sanders was greeted by two and a half minutes of cheers before he spoke on 25 July, but there were boos from a section of the crowd every time he repeated his endorsement of Clinton. There were also Sanders supporters tearing up in the knowledge that he wasn’t going to be their presidential candidate.

We can’t support her. It goes against the grain of everything we stand for.

After seeing Bernie and seeing that good, I just don’t know how I can bring myself morally to choose between, you know, that lesser of two evils.

The difficult decision Sanders supporters faced became even more difficult when Clinton contemptuously chose Tim Kaine as her vice-presidential candidate. An “unacceptable” candidate for 88% of Sanders delegates, the Intercept‘s Zaid Jilani has described Kaine in the following way:

he tends to side with business interests over labor. You know, he supported so-called right to work [an anti-union]. He has, in the past, until two days ago, supported the Trans-Pacific Partnership [TPP]. He has supported offshore drilling off the coast of Virginia. He has definitely deferred to business and corporations in ways that I think Bernie Sanders doesn’t want, and I think probably the majority of Democratic voters in America don’t want.

This decision seemed to characterise Clinton’s contempt towards Sanders voters for whom TPP was a deal-breaker. And with this in mind, it came as no surprise when a number of Sanders supporters walked out of the convention when Clinton was officially chosen as the Democratic nominee on 26 July.

Is there a progressive alternative to Clinton?

While 90% of Sanders supporters are reportedly prepared to trust his judgement and make a tactical vote for Clinton, others find the prospect impossible. As a result, some Sanders supporters have already switched sides to the Green party, whose candidate Jill Stein become the most successful female presidential candidate in US history in 2012.

Stein’s platform is much closer to the policies proposed by Sanders than the current Democratic platform, and would offer Sanders supporters the chance to avoid a ‘lesser of two evils’ vote for Clinton. The ecosocialist Greens have proposed, for example, a public works programme to make the USA completely powered by renewable energy by 2030 and a “radical reduction” in both the prison population and the defence budget – among a number of other progressive measures.

Speaking to Democracy Now!, Stein recently made her case for voting neither Clinton nor Trump later this year, saying:

But the issue of electability is key where the Greens are concerned. The party currently has zero representatives in both the congress and the senate. And in 2012, Stein won only 470,000 votes.

According to one Sanders supporter, activist Benjamin Jealous, there is no point in voting for Stein as America’s rigged electoral system means that it would simply be a wasted vote. He told Democracy Now!:

It’s great to have big, bold dreams… but I’m not gonna waste your time unless I know that we have a good chance of winning

In other words, Jealous believed that the only chance to get any kind of progressive policies enacted in the upcoming presidential elections would be by supporting the Democratic party’s Sanders-influenced platform.

A much less attractive option for disgruntled Sanders supporters opposed to Clinton would be to vote for Trump. Opposition to free trade, and more specifically the TPP, is one of the few major policy positions Sanders and Trump supporters have in common. And Trump is hoping that this, along with their shared dislike for Clinton, will be enough to attract some angry Sanders voters over to his camp.

One Bernie supporter allegedly told the Daily Beast that they would support Trump over Clinton because the resulting “economic uncertainty and social disorder” would inspire the further growth of America’s grassroots left-wing activism.

But the truth is that Trump has shown – through his words, actions, and policies – that he’s a man with sexist, racist, and authoritarian tendencies. And while his pathological lying has helped to hide his record of declaring bankruptcy six times from many voters, it is unlikely that a significant number of Sanders supporters will be convinced that he’s the best option.

The tragedy of US politics

A recent poll showed that 58% of Americans want an end to the perpetual two-horse race which currently characterises US politics. Another found that 13% of registered voters would actually prefer for a meteor to hit Earth than for Trump or Clinton to become president.

But the tragic reality is that US voters will likely be forced yet again to choose the ‘lesser of two evils. Far from democracy, this is bipartisan plutocracy at its worst.

Clinton’s victory over Sanders may have been very controversial, and her ability to defeat Trump was always doubtful, but that didn’t necessarily mean Trump had victory in the bag. Although many voters are sick and tired of having to elect politicians they don’t agree with, a unity platform in the Democratic party including Sanders or a similar figure as the vice-presidential candidate could probably still have convinced them to stick with the Democrats.

But that didn’t happen.

And now, the resulting disenchantment and disenfranchisement of left-wing voters in the USA could well see Trump march to victory. Unless of course the Democratic party changes radically in the coming months.

Featured image via The Hill/Twitter