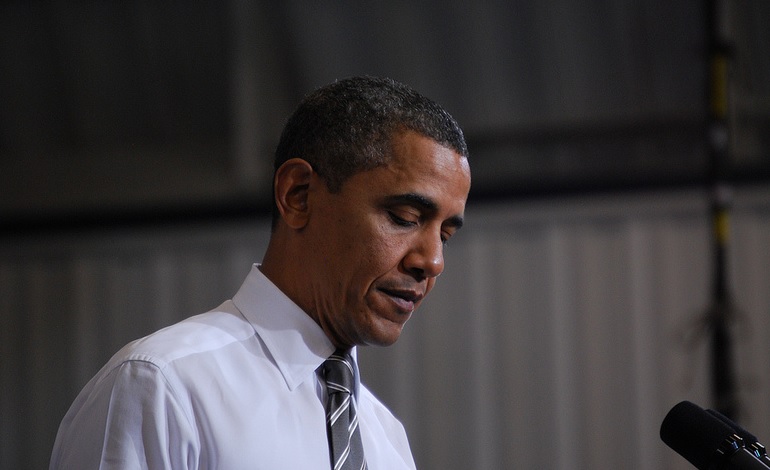 As Barack Obama’s presidency draws to a close, media outlets are clambering to sum up his legacy. But there is one record that most commentators are ignoring. And with the conclusion it draws about the outgoing ‘liberal‘ US President, that omission comes as no surprise.

Since Obama took office in 2008, his administration has sold more weapons than any other since WWII. In fact, his office had surpassed the sales of others within five years of his presidency. As William Hartung, director of the Arms and Security Project at the Center for International Policy, wrote in 2015:

By his sixth year in office, arms sales agreements totalled over $190bn. The latest figures released in December by the Congressional Research Service (CRS), meanwhile, show that the figure rose to above $200bn by 2015. As The Guardian pointed out, the CRS calculations correspond with figures released by the Pentagon in November. It estimated that foreign arms sales under the Obama administration add up to over $278bn.

But this is not the only dubious accolade Obama has earned during his presidency. He has prosecuted more whistleblowers than all past administrations combined. He has also deported more immigrants – 2.5 million – than any other president. And he authorised the creation of a vast drone programme. One that renowned scholar and commentator Noam Chomsky described as “the most extreme terrorist campaign of modern times”.

And all this has been achieved by a president who won the Nobel Peace Prize in 2009.

The CRS arms sales figures highlight trends, both about Obama and the US in general. The continuing dominance of the country in the arms industry is clear. As Hartung told The Canary:

According to CRS, over 50% of all new arms transfer agreements worldwide in 2015 were for US-supplied weapons, two and one-half times as much as the next largest supplier, France. This fits the pattern of the Obama years, where arms sales have been pushed aggressively for both economic and foreign policy reasons.

And although the biggest sales to Saudi Arabia occurred in Obama’s first term, Saudi Arabia and the Gulf States remain the most lucrative market for US firms.

Many of the arms flowing from the US to that “lucrative market” in Saudi Arabia are, of course, being used in its brutal war in Yemen. A Saudi-led coalition began a military campaign in the country in 2015, after Houthi militias overthrew US- and Saudi-backed Yemeni President Abd-Rabbu Mansour Hadi.

Saudi Arabia has faced numerous accusations of war crimes in its offensive. It has attacked schools, hospitals, refugee camps, factories and funerals. And Unicef claims that the conflict has led to the loss of at least six children’s lives each day, on average.

In December, US officials announced that some weapons supplies to Saudi Arabia would be stopped. This was a “direct reflection of the concerns that we have about Saudi strikes”, the officials explained. The UK government faced the same choice at that time, as it also supplies weapons to Saudi Arabia. But it declined to take any action.

What next for the US?

From 20 January, weapons sales will be in the hands of incoming President Donald Trump. Although, as Hartung told The Canary, there are still “huge orders” to be fulfilled to the Middle East. Hartung continued:

It remains to be seen whether the Trump years will see similar US dominance of global arms trading.

Trump’s position on China may lead to greater sales to US allies in East Asia, a process that was already under way.

The arms sales to allies in East Asia, which may increase under Trump, coincide with Obama’s “pivot to Asia”. Announced in 2011, the “pivot” saw a huge US military build up in the region. As investigative journalist John Pilger explained for his documentary The Coming War on China:

Today, more than 400 American military bases encircle China with missiles, bombers, warships and, above all, nuclear weapons. From Australia north through the Pacific to Japan, Korea and across Eurasia to Afghanistan and India, the bases form, says one US strategist, ‘the perfect noose’.

Hartung also believes the Trump administration is likely to “tout the jobs effect” of weapons deals. Job creation was one of Trump’s primary campaign promises. And he has already signalled a willingness to view weapon creation in competitive terms.

Trump recently said “Let it be an arms race”, according to MSNBC. But let it also be remembered that this enthusiasm for arms is not a break from the US norm. It’s a continuation. And while there are achievements Obama can be proud of, Obamacare and the Iran deal to name but two, this legacy is certainly not one of them.

– Oppose the military-industrial complex with the Campaign Against Arms Trade.