A Corbyn-supporting group has big plans for 2017, and it wants to see the world transformed - Canary 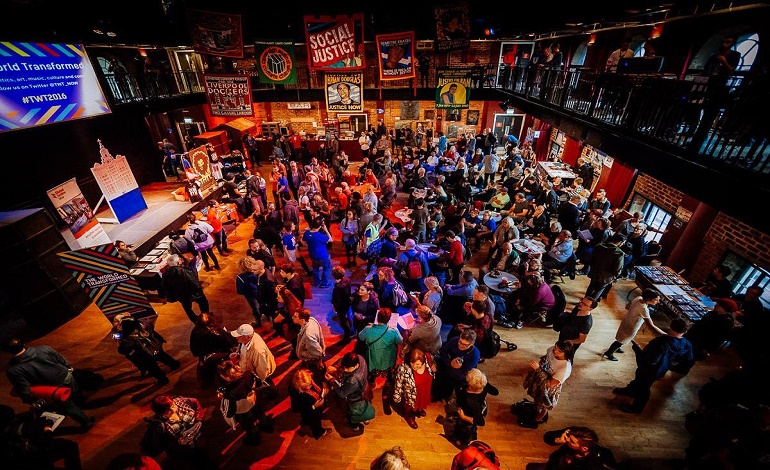 A Jeremy Corbyn-supporting grassroots activism group is launching a series of campaigns during 2017. The World Transformed (TWT) will be hosting events, including tackling Brexit head-on, centred around its successful fringe conference in 2016. And The Canary spoke exclusively to a TWT organiser, to get a taste of what transforming the world could look like.

TWT grew out of Momentum. Its first event was a four-day festival of politics, art, music, and culture last September; taking place alongside the Labour Party Conference in Liverpool. The event was, by all accounts, a success. More than 5,000 people attended more than 150 workshops, talks, gigs, and exhibitions, making it the largest fringe event ever at a Labour conference. But TWT wants to take things a step further this year.

The plan is to run two major TWT events. And as Charlie Clarke told The Canary, last year’s festival proved that its formula is a winning one:

The vast majority of 2016 delegates seemed to be really impressed by the event. Much of the feedback was about it being a breath of fresh air compared to the Labour Party Conference; much more interesting and exciting. Given we never knew how many people would be attending, we were constantly moving the set-up around to accommodate the growing numbers. I remember consulting a delegate in a wheelchair about whether there was enough of a gangway among the chairs. She told me how much more accessible our event was than the Labour Conference. This meant a lot. Considering the resources behind the party’s official conference compared to ours, this was a massive achievement in itself.

TWT was a response to the public’s renewed interest in political education, seen after Corbyn’s victory. Momentum brought together people from Talk Socialism, People’s PPE, Momentum Arts and Kids, and Red Pepper magazine for September’s fringe event. The idea was to create a space for new and old members to exchange ideas in an open fashion, and to bring together the broad left along with the shadow cabinet. Clarke said:

It grew from there, with music and arts becoming central and loads of different progressive organisations and individuals getting on board. Given its history, having it in Liverpool was also really significant. Merseyside Momentum were very much on board and supportive, and the venue, The Black-E, was brilliant. In lots of way the venue was the star of the show.

The group’s ethos seems to fit in well with Corbyn’s. As Clarke told The Canary:

The most radical aspect of Corbyn’s philosophy is not necessarily his economic policies. But rather his desire to devolve power and decision making. To undermine the traditional common sense around who counts as worthy of influencing policy and who doesn’t. Much of the opposition to him in the Labour Party is about this; about his desire to turn it into a member-led party, to reclaim it from the bureaucratic culture reinforced by Blair.

But as Clarke also said, Labour itself needs to look at its ethos:

There is a tendency in the party that simply sees it as a factory for producing election victories – which really means reproducing the status quo. What has drawn in so many people is the possibility that the party could be something more than simply a factory, that it could become a laboratory – a space where radical and people-orientated ideas can develop and flourish.

TWT seems to want to encourage this ethos, but in the realm of political education. But it doesn’t ‘do’ education, in the traditional sense of the word. When people attend TWT events, not only do they feel involved, but the organisers hope they feel transformed and empowered in the process. And as anyone who’s sat on a long, corporate company course will know: being ‘talked at’ means that you hear a lot of words. But it’s unlikely to make you want act; it does very little to encourage self-confidence. As Clarke succinctly put it:

It intends to start with a campaign centred on Brexit. The somewhat mischievously titled ‘Take Back Control’ will be a series of one-day events, kicking off near Easter. These should coincide with the triggering by the government of Article 50. TWT will hold Take Back Control events across the country. But it will mostly focus on areas with a high UKIP share of the vote, or ones which voted overwhelmingly for Brexit.

The TWT plan is to make an intervention in the Brexit negotiation process. The organisers stress it’s not to stop the process of leaving the EU. But rather to challenge the fact that it’s taking place behind closed doors. Which excludes the vast majority of people who will have to live with the consequences of Brexit. It aims to take the negotiations out of Westminster, board rooms and the mainstream media, and put them firmly into communities. As Clarke said:

Excluding ordinary people and communities from political, as well as economic decisions and control is the underlying motor behind neoliberalism. Our events are about finding common ground. The establishment want us to be either ‘Leave’ or ‘Remain’ voters; as ‘immigrants’ or ‘citizens’. The aim of the right is to divide people. To pit them against each other. The first stage of a progressive alternative must be to unite people against the establishment, and not against each other. Take Back Control is about creating spaces where people discuss, learn and construct solutions and campaigns together- no matter whether they voted Leave, Remain or didn’t vote at all.

The other major TWT event in 2017 will be the festival. But this time, it will be in Brighton. As Clarke told The Canary, there is still a lot of planning to do, but more details will be available, soon. But think of it as ‘The Edinburgh Festival of politics’ – just on the south coast.

But the arts section of this year’s TWT festival is already taking shape. Jessie Hoskin and Natasha Josette, curators for TWT, told The Canary:

The arts aspect of TWT 2017 invites the people of Brighton to explore themes around the future and the city. There will be the opportunity to join in the month long program we have planned, on a platform to showcase your collaborative visions and share effective, progressive ideas. Join architects and VR developers in designing your idea of what schools, playgrounds and even hospitals should look like. Or take part in one of our many workshops with artists and political groups.

Creative activism features established and local artists forging links with grassroots and activist groups; collaborating consciously to produce work that liberates the spectacle and turns it into effective activity. You’ll be able work on your own films for the festival and upload them to our multi media platform. Get involved with our arts symposium where we will be discussing how we can effect real policy change for the arts. And let’s not forget that the workshops we aim to provide are all free.

Momentum and the world, transformed?

TWT is a breath of fresh air in the current climate of ‘post-truth’ politics, the furore of Brexit, and an establishment that would happily see us divided. Positive, inclusive, outward-looking, and proactive, the group has taken the success of last year’s event and run with it. Trying to remain neutral in the highly-charged Brexit debate may be challenging. But both the Take Back Control events and the festival are bold and fresh ideas. And anything that challenges the current status quo of negative, divisive discourse should be applauded.

– Find out more about The World Transformed.

– Join a local Momentum group, near you.

Featured image via The World Transformed