As the UK government cosies up to dictators, one British woman risks everything for democracy [VIDEO] - The Canary 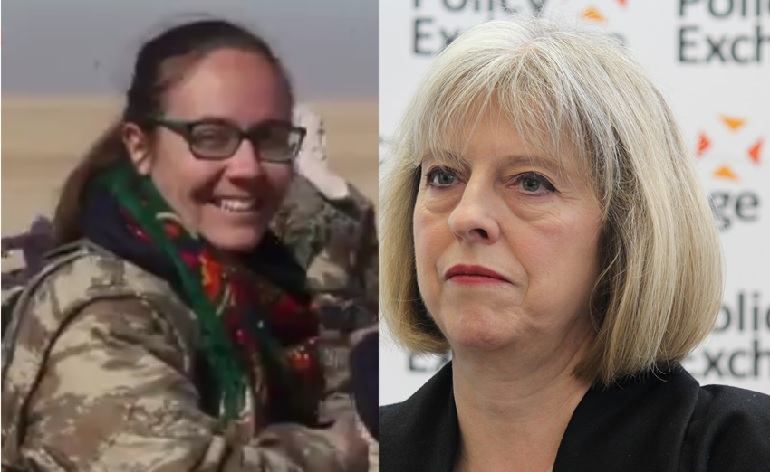 As Turkey continues its descent into dictatorship and keeps undermining Syria’s prospects for democracy, Britain’s silence is deafening. And its backing of Turkey is just as damning. But as Theresa May’s Conservative government cosies up to authoritarian figures around the world, one young British woman has risked everything to stand up for democracy.

Joining the fight for democracy (and against terror) in Syria

Kimberly Taylor – a 27-year-old from Lancashire – visited Syria in late 2015. She told The Guardian how she was “torn apart” by the conditions refugees fleeing the destruction of Daesh (Isis/Isil) were living in. And she said:

I made a promise to myself that I would commit my life to helping these people.

She soon found inspiration in the Kurdish-led forces of Rojava (northern Syria), which have been defending a secular, multi-ethnic, and feminist experiment in direct democracy since 2012. She quickly “fell in love” with how the Rojava Revolution had:

completely recreated society putting women at the front of everything.

She is currently supporting Rojavan forces as part of a combat media team. This means working on the front line in their ongoing assault on the self-proclaimed Daesh capital of Raqqa.

Kimberly Taylor @kimmieslife is the first British woman to have joined the YPJ in its fight against "patriarchy, inequality and ISIS." pic.twitter.com/v8v1cFbP8A

Britain’s NATO allies in Turkey, meanwhile, recently threatened to attack Raqqa itself unless the main Kurdish-led group in the multi-ethnic SDF (Syrian Democratic Forces) stepped aside. It’s worth remembering here that high-level whistleblowers have accused Turkey of actually supporting Daesh and other jihadi forces in Syria in the past.

At the same time, the Turkish regime has just dismissed 227 judges and prosecutors, meaning it has now purged close to 4,000 members of the judiciary since the failed coup attempt of 2016. The regime also continues to target politicians from the left-wing Peoples’ Democratic Party (HDP) – whose successes in the June 2015 elections contributed to the ruling AKP party’s decision to launch a crackdown on dissent (which continues today). Courts sentenced HDP co-chair Selahattin Demirtaş, for example, to five months in prison on 21 February for “insulting the state and its institutions”. And at the same time, the regime removed the parliamentary status of HDP co-chair Figen Yüksekdağ.

In spite of this situation, the British government keeps cosying up to Turkey. The country – still “a major buyer of UK-made weapons” – has just signed a £100m fighter jet deal with the UK. And in a recent interview with the country’s state-run Anadolu Agency, Minister of State for Europe and the Americas Sir Alan Duncan said:

instead of sitting in a comfortable armchair, lecturing Turkey, it is better to understand what they are up against and work with the country to make sure that they could be [a] stable, democratic and very powerful and important force in the region

Theresa May’s government may indeed believe that it’s playing a moderating role by supporting Turkey regardless of massive human rights concerns. But it isn’t. It’s effectively giving the Turkish regime a green light to keep shutting down opposition protests; closing opposition media outlets; and arresting pro-peace MPs, journalists, and activists. And Ankara has long sought to mould Syria in its own anti-democratic image, too. So amid official British inaction regarding Turkey and its self-interested intervention in Syria, it looks increasingly like it’s up to ordinary citizens like Kimberly Taylor to stand up for democratic principles in the region.

– See more on British volunteers in Rojava here, here, and here. Also read about the West’s support for Turkey’s crackdown on its opponents.