Sick of politicians telling them what to do, Irish women are now striking for change - Canary 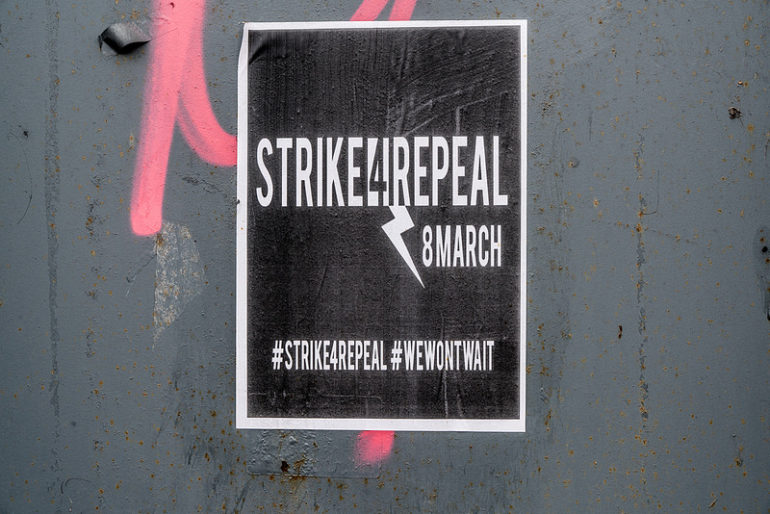 Women in the Republic of Ireland are going on strike on 8 March to call for an end to criminalised abortions. And women in the UK are set to join them. The action will coincide with a proposed global women’s strike – inspired by the US-based Women’s March group.

In October 2016, women in Poland organised a similar strike after their government proposed criminalising abortion. Polish politicians cited the protests as contributing to their U-turn. Activist group Strike For Repeal is hoping the Irish government will also respond positively to the upcoming strike.

Abortion rights groups in Ireland are calling for the repeal of the eighth amendment to their constitution. Article 40.3.3 was added after a national referendum in 1983. It says:

This allowed the Protection to Life During Pregnancy Act to be passed in 2013. As per this law, abortion is illegal in all cases except where a woman’s life is at risk. It is not allowed in cases where a woman’s health or well-being is at risk. Nor is it legal in cases of rape, incest, or foetal anomaly. In short, women are forced to carry non-viable foetuses to term. And the maximum prison sentence for obtaining an abortion is 14 years.

The law in Northern Ireland is not dissimilar. The 1967 Abortion Act that permits abortion in the rest of Britain does not extend there. Abortions can be performed if there is a risk to the mother’s life or there is serious risk to her mental or physical health. But they cannot be performed in cases of rape, foetal abnormality, or incest.

To avoid punishment, many Irish women travel to Britain to receive abortions. Statistics suggest that around ten women a day make this journey. Those who cannot may end up buying illegal pills on the internet. They will risk their lives to avoid pregnancy because they know parenthood is not right for them.

The London-Irish Abortion Rights Campaign (L-IARC) held an open meeting on 1 February. Speakers included Ailbhe Smyth from the Coalition to Repeal the Eighth Amendment, who pointed out:

We all know 10 to 12 women a day are coming to Britain. There is collusion to turn our backs on women when they need it.

Ann Furedi from the British Pregnancy Advisory Service (BPAS) made a similar point:

We got hugely outraged when Donald Trump said he would be willing to send women to prison for abortions, but we forget that our own law criminalises women for abortion.

This is the case in the rest of Britain, too. The Abortion Act gives conditions under which abortion can take place. It does not decriminalise it. But medical science means that women don’t need to be forced to give birth anymore. They don’t need to risk their lives with pills or travel to other countries to avoid it.

That’s why women will be protesting on 8 March. Because Donald Trump isn’t the only threat to women.

– Read more about Strike For Repeal.