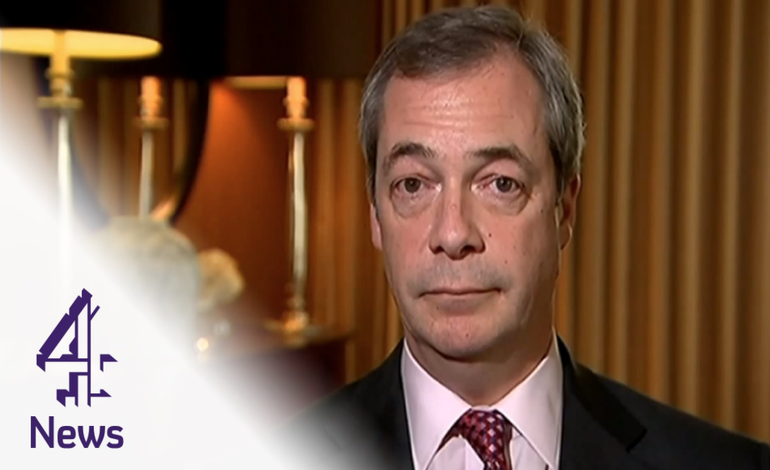 Nigel Farage found himself entirely out of his depth when up against Channel 4 News correspondent Ciaran Jenkins on 22 February. The former UKIP leader misrepresented data to claim Sweden was the rape capital of Europe due to Muslim immigrants. A claim that was soon to be taken apart entirely.

On 20 February, Nigel Farage attempted to provide ‘evidence’ for claims by US President Donald Trump that Sweden is suffering a rape crisis due to high immigration. Using the platform granted him by LBC radio, Farage stated to thousands of listeners that, due to Muslim immigration, “Malmo is now the rape capital of Europe”.

Malmo in Sweden is the rape capital of Europe due to EU migrant policies. Anyone who says there isn't a problem is lying to you. pic.twitter.com/Aw7GvsECeX

Facing a challenge, Farage tweeted what he claimed to be a UN graph that appeared to back his claims.

Reported rapes in Sweden trebled from 2003-2010. The UN graph below says it all. But @BuzzFeedUK want to pretend there is no problem. pic.twitter.com/UNPU45q4tg

While the chart pleased UKIP and Trump supporters, Channel 4 News correspondent Ciaran Jenkins decided to fact-check Farage in real time. Across several tweets, Jenkins debunked Farage’s claims entirely. It turns out the UN never made this graph. And a look at actual UN charts reveals a major rape issue. Not for Sweden, but for the United States.

Farage gets the Channel 4 News treatment

Viewers have come to expect straightforward and high-quality journalism from the team at Channel 4 News. And Jenkins stayed true to form during the exchange. He began politely, and retained his composure throughout. Systematically picking Farage apart.

Respectfully @Nigel_Farage the "UN graph below" does not "say it all". pic.twitter.com/QTfDyWeWWJ

He began with the misrepresentation of data.

The data comes from the United Nations Office on Drugs and Crime. It comes with this crucial caveat: pic.twitter.com/3466MeKDQT

Respectfully, saying the "UN graph says it all" does not appear to be exercising the "caution" that the source of the data advises.

Then, Jenkins moved on to share the actual position of the United Nations Office on Drugs and Crime (UNODC). Because it was this organisation’s data that Farage misrepresented in the graph.

On that point, here is a graph the UNODC did produce. They did not produce then graph you attribute to them. pic.twitter.com/FvT2pSlWzM

Why the focus on a country that does enforce rape laws rather than those that do not?

Where is the greater threat to victims?

The critical issue is that, as is becoming a frequent occurrence, the facts seemingly made no impact on the supporters of Farage or Trump.

Do you know what you can do with your fucking chart?

Given the choice between a lie which validated their bigotry and truth which challenged it, they opted for the former. And this is the real challenge facing opponents of the far-right, from liberals through to anti-fascists: how do you change minds which have no desire to change?

History would suggest that, instead of courting the far-right, we need to repair the bridges between the majority which don’t follow their ideology. The liberals, the left, the progressives, the anti-fascists. Because the narrow confines of the liberal establishment cannot win this battle on its own. It must wake up to the fact that the progressives to its left are allies, instead of treating them as the left fork of an extremist pincer movement. That way, the far-right will be outnumbered and outgunned where it counts – in the battle of ideas.