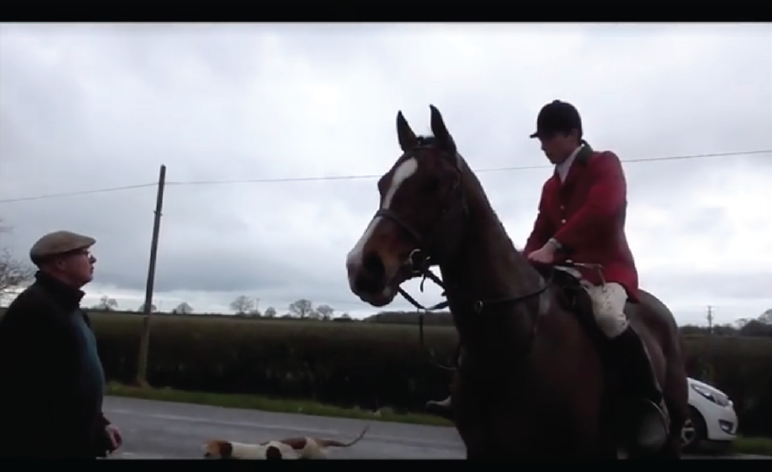 A video has emerged which shows the owner of a shire horse breeding farm confronting a huntsman. It’s tagged as being recorded by the Cheshire Monitors. The landowner featured is very clear about his annoyance. And he also speaks as if fox hunters trespassing is a common occurrence.

The video was uploaded to the Facebook group Hounds Off:

The hunt monitors filming suggest that the landowner should shoot the hunters rather than their dogs. The huntsman approaches them at this point, and they tell him “we’re filming you”. The huntsman replies “it’s a good job [as well]”.

The landowner continues to complain about the hunts trampling all over his field. He says that he’ll have them stopped, and that it’s no wonder they’re being followed by hunt monitors. He also adds that the huntspeople are “f*cking ignorant”. Following this he asks:

You’re not chasing foxes, are you?

The huntsman says that they’re not, but the landowner follows by asking:

Well what’s the fox they’ve gone after in there then?

The huntsman denies having seen a fox. The hunt monitors and the landowner both say that they have. The landowner adds:

Oh there was. Because my dog chased it across this field.

Later in the video, the landowner states:

I’ve worked seventy f*cking years to get this place, and you lot come on [and] think you own it.

Most criminals are faced with much harder repercussions than having to grudgingly apologise. And it’s time that the police started treating these people like the criminals they so often are.