As diplomacy breaks down before elections, Turkish nationalists give a boost to their Dutch counterparts [VIDEO] - Canary 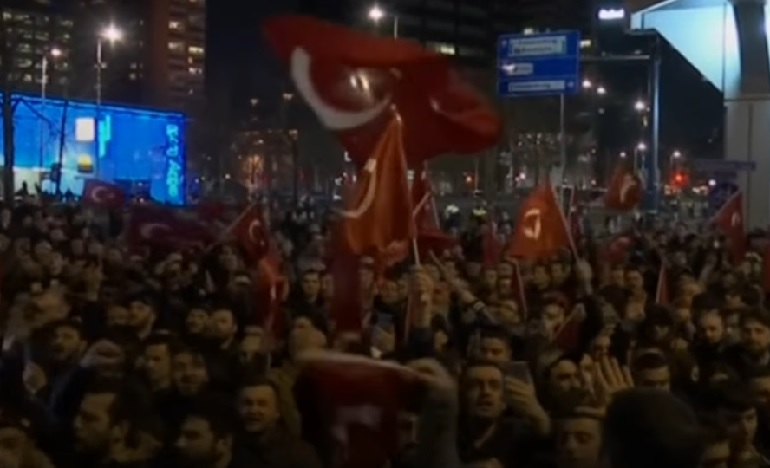 Diplomatic tensions are currently escalating between a number of European governments and the Turkish regime of Recep Tayyip Erdoğan. And in the run-up to several key elections in Europe, the provocative behaviour of Turkish nationalists looks like it will give a further boost to the European far right.

Perhaps nowhere more so than in the Netherlands.

President Erdoğan is currently seeking to further empower the office of the Turkish presidency. And ahead of a referendum on the issue, his government is trying to increase its likelihood of winning. But in the last few weeks, a number of European countries have cancelled events sponsored by the Turkish government; or they’ve stopped Turkish officials from attending them. The most recent denial came from the Netherlands, which faces elections on 15 March that Reuters has called “a test of anti-immigrant sentiment”.

Erdoğan responded to the Netherlands by saying the country would “pay the price” after it blocked a Turkish minister from visiting the Turkish consulate in Rotterdam. He also likened the Dutch government to fascists, saying:

I thought nazism was over, but I was wrong. In fact, nazism is alive in the west.

This in spite of Erdoğan himself having forged an alliance in recent years with neo-Nazis back in Turkey.

to be called Nazis by a regime which is walking backwards in regards to human rights is just disgusting.

Asscher was likely referring to the ongoing civil conflict in Turkey. The UN recently slammed Erdoğan’s regime for its crackdown on freedom of speech; and for the devastating effect its war has had on human rights in the country.

Pro-Erdoğan protests give a boost to Dutch nationalists

Spurred on by the comments of officials back in Turkey, Turkish nationalists in the Netherlands soon came out onto the streets. And on 12 March, Dutch police used dogs and water cannon against hundreds of flag-waving Turkish protesters.

Such behaviour from the nationalist Turkish government, and from its supporters in the Netherlands, has only played into the hands of far-right Dutch politician Geert Wilders. The leader of the anti-Islam ‘Party for Freedom’ picked up on the waving of Turkish flags on Dutch streets. And seemingly referring to other immigrants in the Netherlands at the same time, he said of the protesters: “they have Dutch passports, but they don’t belong here.”

Experts like Professor Joop van Holsteijn from Leiden University, meanwhile, have suggested that the diplomatic crisis between the Netherlands and Turkey will work in Wilders’ favour. Holsteijn insisted:

Immigration and integration, and the relationship of the Netherlands with Turkey, will be rather salient suddenly, and Wilders can be considered the issue owner here.

History shows us that nationalism often bolsters similar nationalist sentiments elsewhere. And in the upcoming Dutch elections, it looks increasingly like that will be the case.